THE CHAMBERLAIN GUIDE TO BIRDING GAUTENG

Here you will find downloadable content associated with the book, THE CHAMBERLAIN GUIDE TO BIRDING GAUTENG. This includes an annotated checklist to the birds of the wider Gauteng region, and GPS and GoogleEarth waypoints that correspond to the birding site numbers in the book. Inevitably, site-specific information is bound to change in a guide such as this book; as such we have included a few updates to specific sites that were sent to us by readers. We appreciate the support! 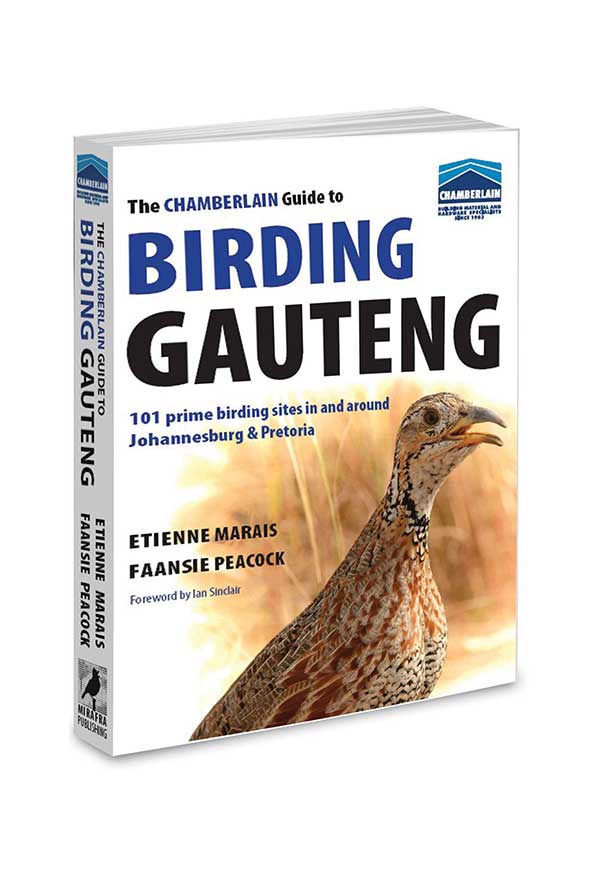 This annotated checklist includes all the birds which can be seen using this book as a guide. The focus of the list is the region covered by the first six chapters of the book (JHB to SW; collectively refered to as the greater Gauteng region = GP). Information pertaining to Further Afield (FA) sites is only given where the species does not occur in the greater Gauteng region (GP) or is difficult to find here and best sought in FA. Each entry provides the bird’s common name, scientific name in italics, and Afrikaans name in [square brackets]. Endemics and Near-endemics are printed in blue. Where applicable, ‘PIC’ provides the page number on which a photo of the species can be seen; and ‘INFO’ leads to more detailed information on the bird in question. This is followed by information on the bird’s habitat, seasonality and abundance. The entry is concluded with the numbers of the sites (not pages) where the species may be found—the best or most reliable sites’ numbers are printed in bold. Due to space constraints, suggested sites are not listed for the most common species.

The links to the right provide GPS Data Waypoints corresponding to the red circles indicating birding spots on the maps of each site. The waypoints are for Garmin and other compatible GPS units. Waypoints are organised by chapter. Many chapters have more than 200 waypoints, and most GPS units will not take more than 500, so it is best to upload just the chapter that you are planning to visit. Unzip the download, and you should see the separate chapters. To use this data with Mapsource you need to connect to your GPS unit using Mapsource, or some other Garmin-compatible programme (such as Ozi-explorer). You can then load the points onto your GPS unit, which will then show the waypoints on your screen. You may also use the waypoints for navigation with an auto-routing GPS if the point lies on or close to a road. Please let us know should you find any errors. Thanks to Niall Perrins for his help with data conversion.

Check out all the Birding Gauteng spots in Google Earth! Click on the link to the right to download the entire selection of Google Earth files in zipped format. These ‘.kmz’ files can be opened in Google Earth, and allow you to browse the birding spots by way of satellite imagery. The files are organised by Chapter. Points are numbered according to the numbers used in the text, and correspond to the numbered red circles on the birding site maps. Using Google Earth together with The Chamberlain Guide to Birding Gauteng will enable you to really get a feel for each birding spot and plan your trip in fine detail!

Inevitably, the site-specific details contained in a book of this nature are prone to changing on a regular basis. As such we have provided a few updates or corrections below – this section provides updated information relating to e.g. access conditions which may have changed, road conditions, contact details, new sightings and also additional accommodation listings. If you discover a mistake or would like to notify us of an update applicable to one of the sites, please do not hesitate to drop us an email  – we will greatly appreciate it!

NORTHERN FARM (SITE 12, p. 33). The Status of Northern Farm has changed somewhat, in that the City Council is not planning to farm cattle anymore. The cattle have therefore been removed and the manure is also being harvested for sale. This means the excellent habitat appears to have been lost and certain species (such as Western Yellow Wagtail) may not be as reliable at Northern Farm as in previous years (Etienne Marais; 1 Nov. 2010)

AUSTIN ROBERTS BIRD SANCTUARY (SITE 23, p. 66). Please be advised that a robbery occurred at the Hadeda Hide on 31 December 2017 around 07:50. The assaillants were dressed as car guards; it was unclear whether they were armed. They took cameras and cellphones. The Blue Crane Restaurant has also been informed of this incident. Let’s hope that this was an isolated case, and that there won’t be any further issues in future (Tony Dippenaar; 2 Jan 2018)

ROOIWAL SEWERAGE WORKS (SITE 36, p. 93). Access arrangements to the Rooiwal Sewerage Works have changed. Contact Mrs Marietjie Wolmarans on 072-190-3474 to arrange a permit (working hours on weekdays). The normal procedure is that you need to sign an indemnity form. Birding remains as described in the book from Page 93. (Ida Nel; 2 Nov. 2010).

VAALKOP DAM NATURE RESERVE (SITE 45, p. 129). Due to construction at Vaalkop Dam (the dam wall itself is being raised) the whole of the eastern section of the reserve (i.e. most of the area covered in the book) is closed to the public. Please watch this space for updates before planning to visit Vaalkop Dam Nature Reserve. Birders are still able to access the picnic site towards point 16 in the book. Please note that access arrangements for North-West Bird Sanctuary via the private Bushwillow Estate has also changed, and that the phone number given in the book (of Nic and Amy Bezuidenhout) is no longer applicable. Watch this space for updates (Colin Summersgill; 19 Aug. 2010)

ELANDSVLEI/DICKIN’S PAN (SITE 63, p. 214). Access arrangements to Elandsvlei have changed. Deon Groenewald has taken over from Athol McOnie and it is essential that birders call in advance as the farm gates are usually locked.  Contact Deon on 082 388 0546. Birding remains as described in the book from Page 214. Also note that in June 2015 the main pan was dry. (Etienne Marais; 4 June 2015)

GROENFONTEIN PAN (SITE 66, p. 223). The farm on which the pan is situated has new owners, and it is no longer necessary to phone in advance. The number given on page 223 is no longer the number for the farm owners. Proceed to the farm-house as directed and ask for permission. The new owners are happy that birders visit the pan. (Mark Tittley; 10 Sep. 2010)

MARIEVALE BIRD SANCTUARY (SITE 68, p. 226). There have been some major developments at Marievale. Firstly, the “old entrance” directly off the R51 has been closed (left of point 1 on the map), and all visitors must now enter the sanctuary via the main gate on the R42 between Nigel and Delmas, which brings you to the southern end of the reserve near the new Visitors Centre. Also note that there has been a mugging at one of the hides, and visitors are urged to exercise some caution (although we believe this was an isolated incident and is no cause for major concern). Recently some of the hides have been damaged (e.g. Shelduck hide in the far north-western corner). (Faansie Peacock; 2014)

SUIKERBOSRAND NATURE RESERVE (SITE 69, p. 331). The reserve was closed in January 2015 owing to water shortages. The Reserve was partially re-opened on 16 June 2015, but only the Cheetah and Bokmakierie day hiking trails, Toktokkie disabled trail, Diepkloof picnic area and Farm Museum. The circular Tourist Route is currently closed. A notice is on display advising that as soon as other areas/activities are re-opened, the public will be notified accordingly. (John and Alison Lydon, July 2015)

MAGOEBASKLOOF & WOODBUSH FOREST (Site 89, p. 300). The Bat Hawk site at Rooikoppies has been abandoned by the Bat Hawks. Birders may want to visit another Bat Hawk site at Agatha, south of Tzaneen. Contact David Letsoalo (see p. 300) for information on this Bat Hawk site. The birds were seen on the nest on 15 October. You lose some, you win some…Magpie Mannikin is a sought-after bird which has become regular in gardens in Tzaneen. Contact David Letsoalo (see page 300) for more information on where to find these gem. The location of “Owl Cottage” on the map on p. 303 is incorrect. If you are going to Owl Cottage please phone them for directions, at 015-305-4428. (Etienne Marais; 18 Oct. 2010).

SEND US AN UPDATE