I’ll have to admit something. Come clean. Get it off my chest.

I don’t understand Baillon’s Crakes at all.

There, I said it. These tiny rallids have got me all confused. Why do I say that? Well, they seem to defy the normal patterns. They are not strictly a summer visitor in the rainy season, as one might expect. There are frequent winter records, particularly in the northern parts of the subregion. Secondly, Baillon’s Crakes are not restricted to subtropical areas, but also extend into more temperate regions including the Western Cape’s winter-rainfall zone. They are not limited by altitude: I’ve flushed them from lukewarm tropical pans almost at sea-level on the Mozambique coastal plain, and I’ve seen them alongside White-winged Flufftails in high-altitude grassland bogs along the Mpumalanga Escarpment.

Indeed, as far as crakes go, Baillon’s is one of the world’s most widespread species. It occurs widely across Africa south of the equator, with the exception of the driest parts of the Kalahari and Namib; African populations are thought to be resident or locally nomadic. Ditto for populations on Madagascar. The range extends into parts of Europe, the Mediterranean and eastwards across Asia, as far as China. However, the Palearctic populations are migratory, migrating south from August to October, and returning with the spring rains in March to May. Some of these Eurasian birds at least, winter in India and South-East Asia. In other parts of southern Asia the species is resident, as it is in Australia. It has been recorded as a vagrant all over the show. Even in our region, loners are sometimes encountered in the most unlikely settings at isolated temporary pans in the Kalahari or Namibia. So, in summary…a species that occurs across the entirety of the Old World, from sea-level to high altitude, coastal and inland, and resident, nomadic or migratory depending not the location.

Perhaps it’s best to start at the start. First question: who was Baillon? Sounds French? Oui. Baillon’s Crake is named after Louis Antoine Francois Baillon (20 January 1778 to 3 December 1855). Louis was a French naturalist and ornithological collector. He lived at the time of the French Revolution and Napoleon, and worked in the Jardin des Plantes (botanical garden). He possessed a bird collection of around 6,000 specimens (mainly French species and species collected by French expeditions around the world). One of these was a small rallid collected in northern France. Baillon’s colleague and namesake, the influential but reportedly underpaid Louis Vieillot, described this rallid as a new species and named it after Baillon. Only later did it transpire that Peter Pallas already described this species from the Daurian regions of Russia in 1776, two years before little Louis’ birth. Long story short, the undeserved name Baillon’s stuck. Some unsuccessful attempts have been made to change the name to Pallas’ Crake, and the rather generic Marsh Crake or Water Crake is sometimes used.

In terms of the scientific name, most classifications have it under the name Porzana pusilla, along with Little Crake P. parva and Spotted Crake P. porzana (the nominate type of the genus). Porzana is of Venetian origin, and simply means “small crake”. This is emphasized by the specific epithet pusilla, meaning “small or insignificant”.  However, some modern classifications use the name Zapornia pusilla (but I don’t think we’ll go too far down that road just now).

To further complicate matters, at least six subspecies are recognized worldwide. The nominate occurs in central and eastern Asia. Ours is P. p. intermedia (which also includes the poorly defined obscura and intensa). The race P. p. mira occurs on Borneo, while mayri occupies New Guinea and palustris Australia. Even New Zealand has its own race, namely affinis.

Things get a little confusing in Afrikaans, where this species is aptly called Kleinriethaan i.e. “Little Crake”. However, this could lead to confusion with the actual Little Crake. Wasn’t really a problem as only Baillon’s occur in South Africa. That is until March 2012, when a lone female Little Crake was discovered in a wetland in the Cape Town suburb of Clovelly. The rather unimaginative solution was to name the latter species “Europese Kleinriethaan” i.e. European Little Crake. Nonsensical, as Baillon’s also occurs in Europe of course! Considering what a big twitch the Clovelly Little Crake caused, I would have gone with something a little more esoteric, like Skaarsriethaan (“Rare Crake”), or Populêre Riethaan (“Popular Crake”) or perhaps Verkeersknoop Riethaan (“Traffic Jam Crake”). Getting off topic…

I would have gone with something a little more esoteric, like Skaarsriethaan (“Rare Crake”), or Populêre Riethaan (“Popular Crake”) or perhaps Verkeersknoop Riethaan (“Traffic Jam Crake”).

Another thing that has always intrigued me is why I don’t hear more Baillon’s Crakes. Indeed, I can only think of a few times that I’ve heard the thin, tinny rattling song of this species. Most recently, it was at night, while camping next to a large wetland near Dullstroom. I just don’t think that they are particularly vocal, nor that their calls are very distinctive or far-carrying. And this applies even to areas where they are breeding. If you’re curious, you can listen to the call on the Xeno-Canto website.

So my experience with Baillon’s Crake consists of maybe, 20-odd disparate and occasional sightings that do not seem to be neatly connected. Some of the sightings have been spectacular. One bird at Marievale literally spent ten minutes foraging in the shallow water alongside my boots. But most sightings have been brief, distant or in flight only, and often in the half-light just before dawn, through a cloud of mosquitos. 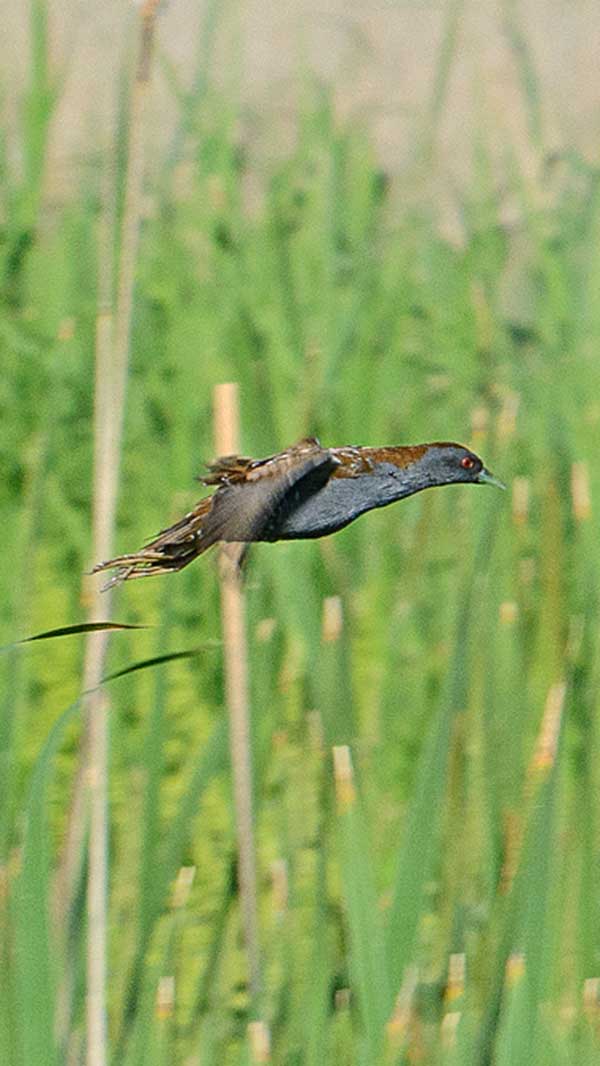 ABOVE: Typical sightings of Baillon’s Crakes usually involve a few seconds’ worth of blurriness in flight. Photo by Dylan Vasapolli / Birding Ecotours. 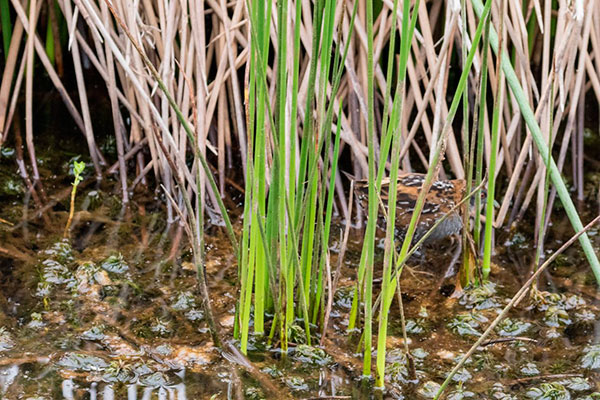 ABOVE: With luck, Baillon’s Crakes may be spotted furtively darting about between clumps of reeds or sedges. They really are tiny – not much bigger than a chicken chick. Their randomly spotted and streaked plumage, plus barred flanks render them nearly invisible in the overgrown wetlands they inhabit. Photo by Thomas Hohls. 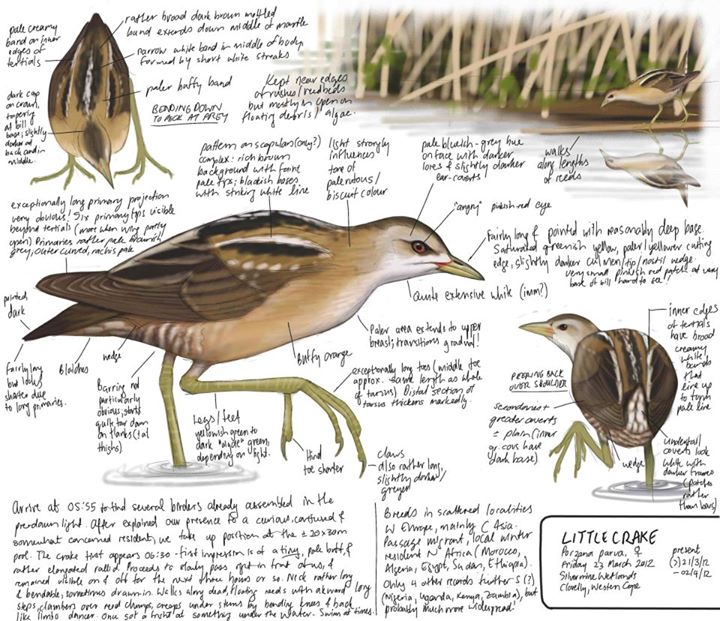 ABOVE: My field notes on the March 2012 Clovelly Little Crake. This bird was a female, and quite different from an adult Baillon’s. However, males look rather similar. 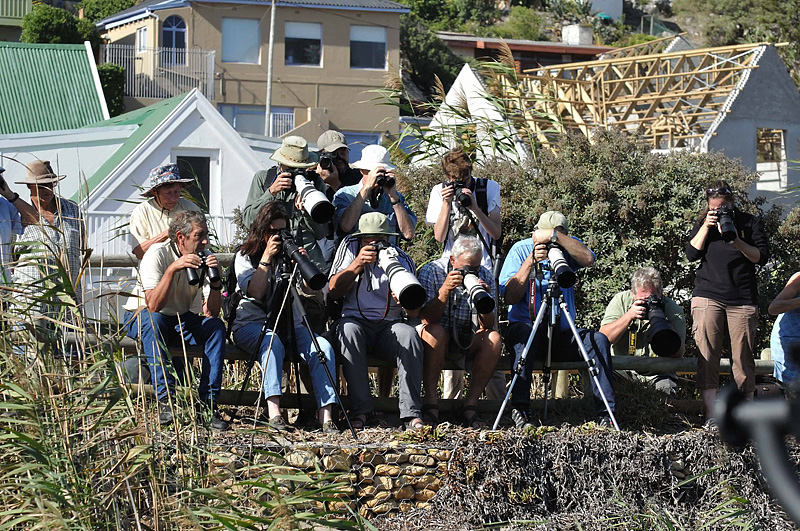 ABOVE: More twitchers! Did you see this bird? I did. And I have a feeling it might turn out to be a big blocker. How long will we have to wait for another one to end up in Southern Africa? Only time will tell.  Photo by Thomas Hohls.

So this is where our story actually starts. In early December 2016, my friend Thomas Hohls visited a magical wetland in the southern Drakensberg called Ntsikeni. Around 07:00 he stopped at one of the new bridges crossing the wetland along the main entry road, and recognised the call of a Red-chested Flufftail (a bit of a bogey bird for Thomas). Upon playing back the call of the flufftail, Thomas spotted a small dark shape darting in and out of the sedges. Assuming it was the flufftail responding to the playback, he was surprised to recognise a Baillon’s in his binoculars. Thomas got the impression that the crake was definitely responding in an aggressive, territorial fashion to the flufftail call – this suggests interspecific territoriality between these two similar-sized rallids. The bird eventually jumped onto the bridge and ran under the car, and was not located again (perhaps it’s still in the engine somewhere).

Baillon’s seldom stand still for long, but Thomas managed this incredible image. What is perhaps most striking, is how bright neon green the bird’s bill is! Between that and the fiery red eye, a really sexy bird. Very chic. Would this flash of bright green be an indication of active breeding or courtship, or perhaps a territorial response to the flufftail “intruder”? I would love to hear your thoughts! 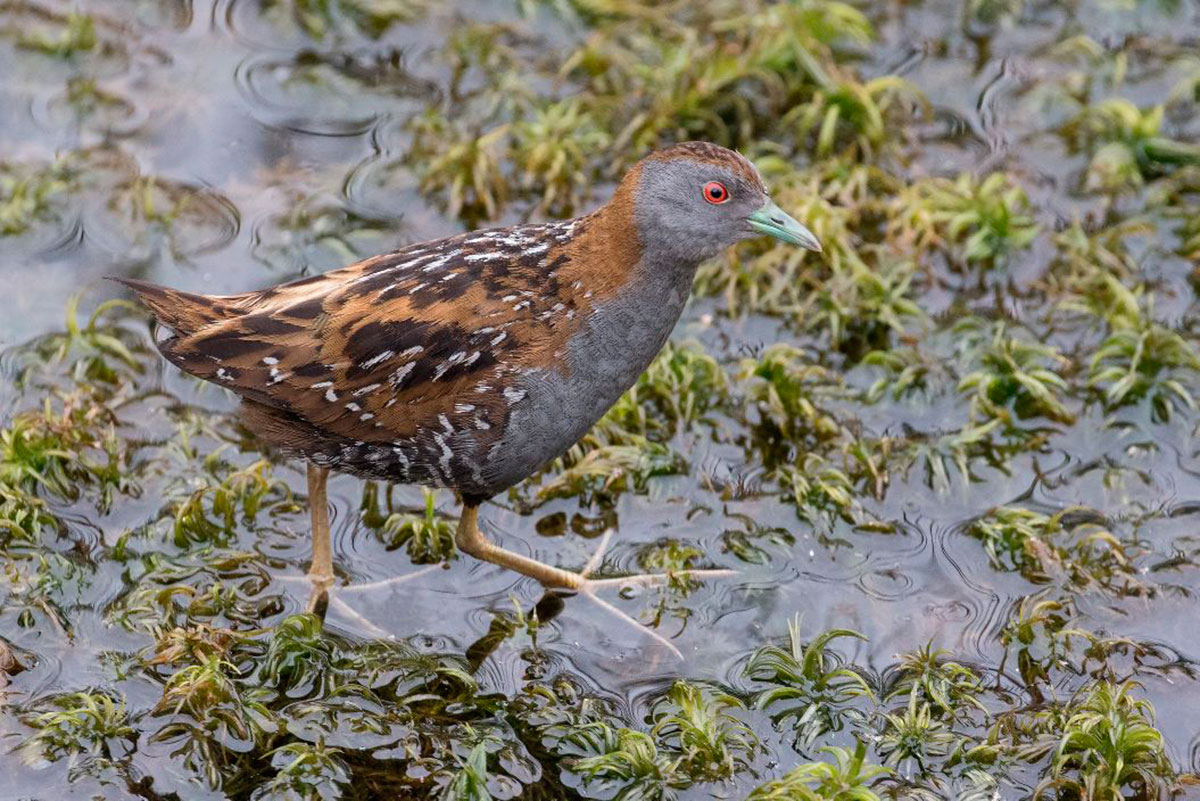 ABOVE: This incredible photo taken by Thomas Hohls at Ntsikeni shows a Baillon’s Crake in its full glory. In particular, note the bright green base to the bill – could this be an indication of active breeding? Baillon’s Crakes are flufftail-sized creatures, characterised by blue-grey underparts, fiery red eyes, chestnut-brown, mottled upperparts with a few scattered white spots and squiggles, and barred lower flanks. They differ from the similar Little Crake (a very rare vagrant to Southern Africa) by their short primary projection, barred flanks and the lack of any red at the base of the bill. What a stunning image!

Ntsikeni is probably one of South Africa’s largest remaining high-altitude vleis, being situated at 1,800 m above sea-level. Due to its importance as a water catchment and habitat for threatened biodiversity, Ntsikeni is designated as a Ramsar Wetland. It lies between the hamlets of Creighton and Franklin in southern KwaZulu-Natal, close to the border of the Eastern Cape. I’ve never personally been there, but from all the reports I’ve heard the place is fantastic. Browsing on Google Earth it has a real wilderness feel to it, with miles and miles of nothingness around it.

Thomas mentions that they found 121 species in two days, including such specials as Yellow-breasted Pipit, Denham’s Bustard, Red-winged Francolin, Broad-tailed Warbler, Barratt’s Warbler and Pale-crowned Cisticola. They also found all three crane species (this wider area is the last remaining stronghold of Wattled Crane in the region). With a bit of hiking, Thomas found Sentinel Rock Thrush and Ground Woodpecker. The localised Drakensberg Rockjumper also occurs at the higher elevations, and there is at least one nesting pair of Bearded Vultures in the reserve, with larger colonies of Cape Vultures as well.

With the exception of the tropical Streaky-breasted, all our flufftails can be seen at Ntsikeni, including the Critically Endangered White-winged. Red-chested abounds in the marsh itself, while Striped occurs at the grassland interfaces and along the vegetated slopes along the fringes. Buff-spotted occupies pockets of scrub and forest in the area. Ntsikeni has a reputation as a relatively reliable spot to find the ever-elusive Eurasian Bittern. Peter Ryan and John Graham describe how they tracked down a booming bird 2 km away, walking the moonlight, stating that “at close range, the male’s boom is extremely impressive, resonating in our chests as much as registering as a sound”. They also drop an intriguing little side note, saying that some of the flufftail calls they heard were unfamiliar to them, and may have belonged to White-winged Flufftails (of which the call is still unknown). Read the full article here.

I think my primary motivation for visiting Ntsikeni would probably be to try and track down the bizarre Long-toed Tree Frog; this species has evolved to inhabit tree-less high-altitude wetlands, leaving its congeners to subtropical forests and woodlands further towards the coast. Temperatures at Ntsikeni regularly fall below freezing in winter, so these hardy little tree frogs estivate underground during the dry cold season. If you go frogging at night, you might bump into African Grass Owl or the majestic Cape Eagle Owl. Mammal-wise, keep your eyes open for Grey Rhebuck, Oribi and Cape Clawless Otter.

Find out more about Ntsikeni, and tips on visiting the reserve from these links: 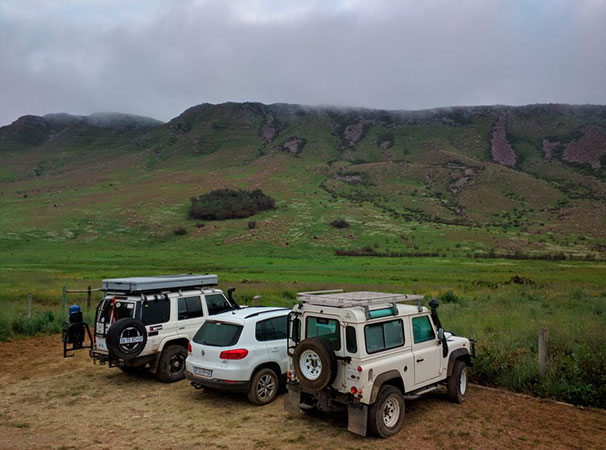 ABOVE: Visiting Ntsikeni is definitely on my to-do list. Hopefully soon! 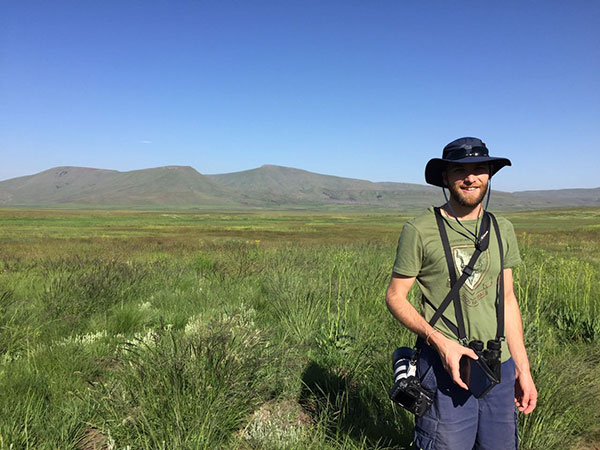 ABOVE: A happy-looking Thomas, with Ntsikeni in the background. 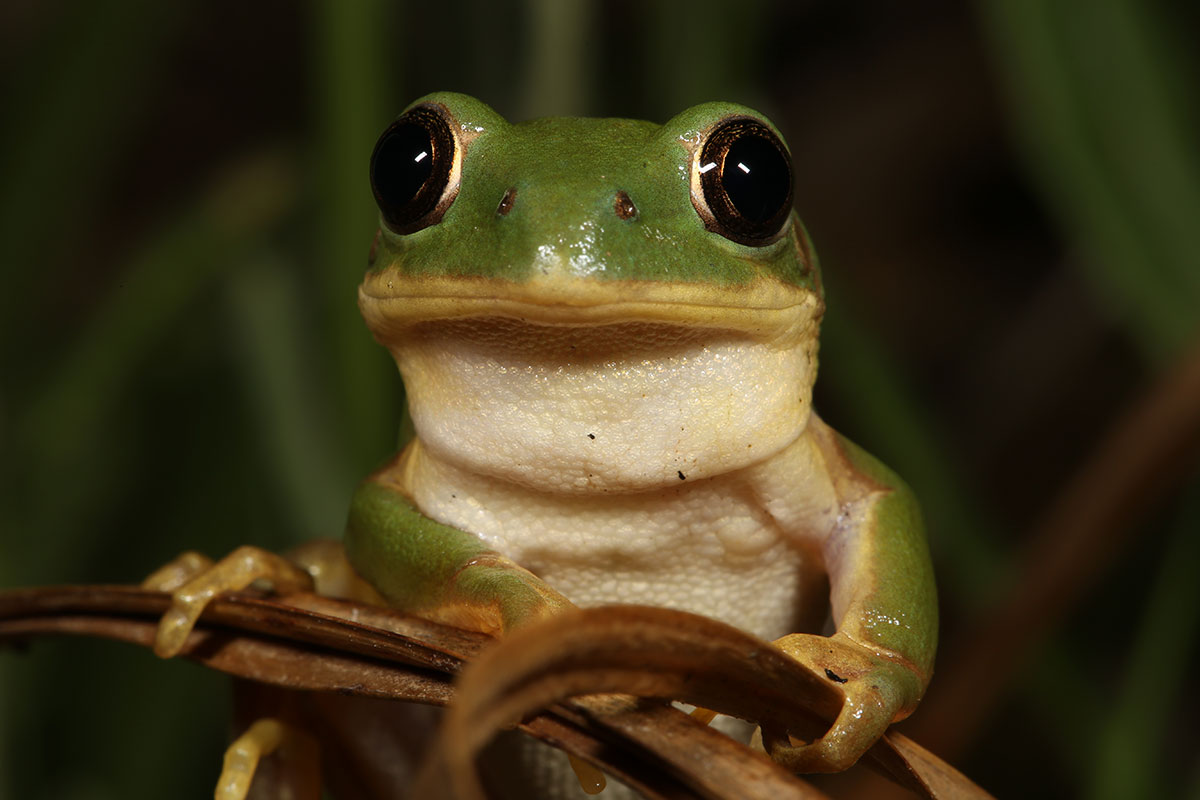 ABOVE: The bizarre Long-toed Tree Frog, Leptopelis xenodactylus, occurs only in marshes between 1,000-2,800m in KwaZulu-Natal. Despite its name, it does not venture into trees; as such it lacks the expanded discs on the finger- and toe-tips that are characteristic of arboreal tree frogs. A stunning photo, by Nick Evans. 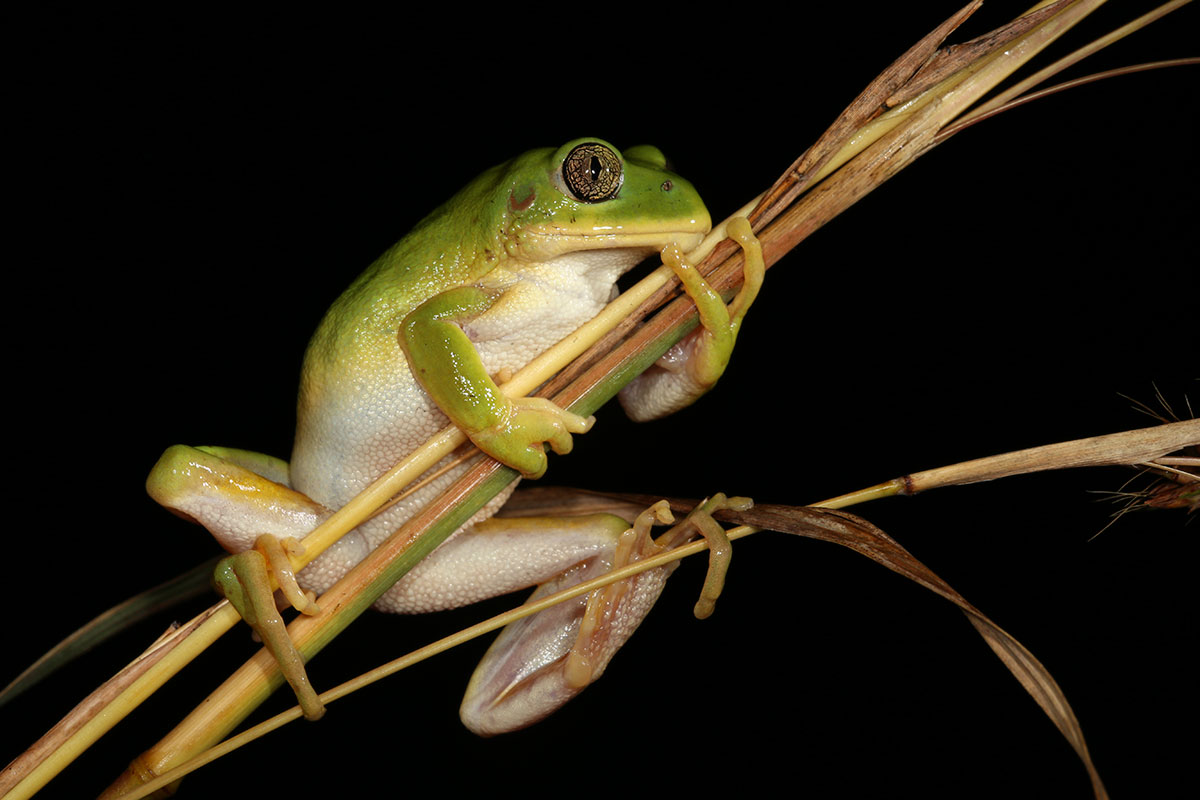 ABOVE: Long-toed Tree Frogs are considered Endangered, and are declining due to wetland degradation. Fortunately some new localities for the species have recently been discovered, suggesting it may me a little more widespread. Photo by Nick Evans.