I wonder what Katy did?

I’ll be the first to admit that my entomological knowledge is limited! Limited in fact, to a few disparate field guides lying around the house, some undergraduate entomology courses at university, and whatever punchy, non-peer-reviewed factoids the internet can produce. Be that as it may, I just had to share my sighting of this little chap, which I  found at Bushwillow Estate, at Vaalkop Dam in South Africa’s North West Province. I was paging through Picker et al.’s Field Guide to Insects of South Africa a few weeks ago, and when I got to the page for this guy, thought ‘Wow, look at this awesome beast; I wonder if I’ll ever get to see one’. The liberal distribution certainly suggested it was a distinct possibility, although the intricate Acacia-leaflet camouflage counted against me. Perhaps the updated search image was imprinted in my subconscious, because literally a few days later, that same ‘awesome beast’ was perched on my finger.

I stand to be corrected, but I believe this is Terpnistria zebrata (Order: Orthoptera; Family: Tettigoniidae). It is also known as the Acacia Katydid – no prizes for guessing why! It is found on several species of Acacia (or Vachellia I should say), as well as related plants. An alternative common name, Zebra Katydid refers to the banded appearance. Its remarkable mimicry of Acacia leaflets is not limited to colouration, but extends to its morphology as well. Look closely at the legs, and you’ll notice that there are leaf-like growths on its tibiae, and the leg spines are particuarly broad and hook, much like the spines of…you guessed it. The flared projection on the posterior edge of the pronotum (i.e. the crest) distinguishes this species from the related T. labulata from KwaZulu-Natal. Another name for this family is the bush crickets, or long-horned grasshoppers: a rule of thumb is that the length of their thin antennae exceeds that of their bodies.

While on the subject of names, where does the English katydid come from? Apparently the term is onomatopoeic, and is a rendition of the call of an American genus: “Katy-did, katy-didn’t”. A bit of googling should lead you to a sound clip. Some of our local katydids also have remarkably loud and persistent ‘voices’ and I’ve spent a few memorable summer evenings tracking down particularly vociferous species, including the spectacular blue-and-orange-legged Zabalius that adorns the cover of Picker, Griffith and Weaving’s field guide. Referring to a katydid’s sound as its voice is a matter of semantics, as the sound is actually produced by males rubbing an oval disk on the rigid edge of the one fore wing, against a toothed file on the other fore wing (back wings are reserved for flight). As in birds, the purpose of producing such loud and far-carrying sounds is probably dually mate attraction and territory establishment. And if you’re going to be sending an audio signal, surely you should possess the apparatus to receive a signal as well? In katydids, the ‘ears’ are slit-like openings called tympana, on the fore legs. It is said that listening katydids ‘cup their hands to their ears’ by lifting their legs up in a human-like gesture. Apparently, and we’re right at the limit of my limited knowledge here, some species also have ultrasonic calls – the BugLady knows more.

Acacia Katydids are widespread across South Africa wherever the annual rainfall exceeds 400 mm, with the exception of the Fynbos biome and the drier parts of the Nama Karoo and Namaquland. In addition to the species I’ve been gushing about, there is another 159 or so to be on the lookout for, two thirds of which are endemic. The family includes herbivores, scavengers and carnivores. Surprisingly, these delicate, fragile-looking creatures are closely related to the rather grotesque Armored Ground Crickets, pictured below feeding on a Square-tailed Nightjar. Yummy. 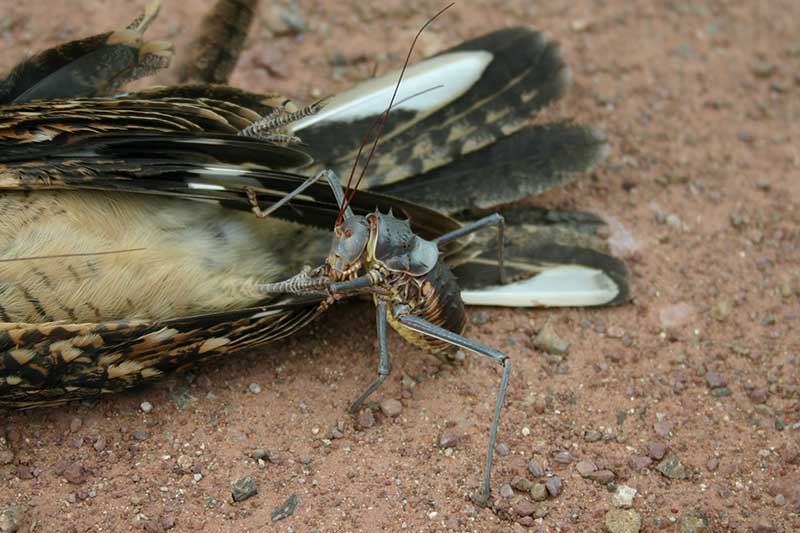