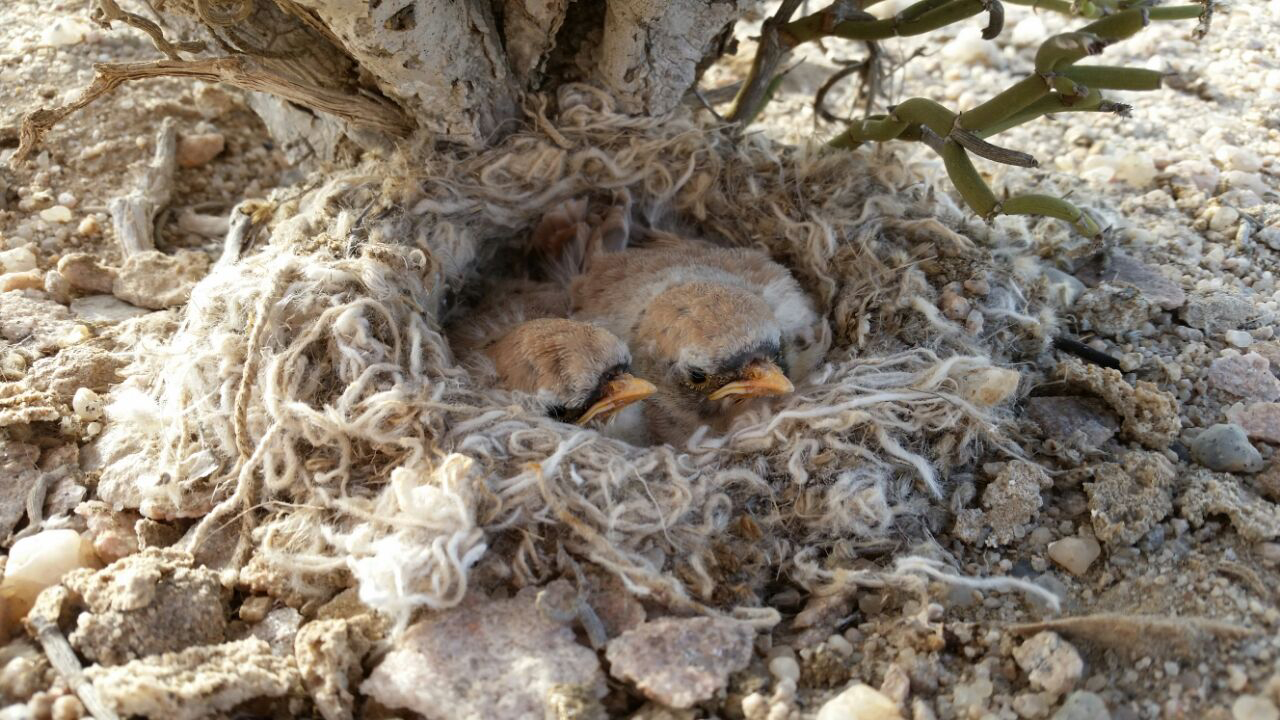 ABOVE: Any guesses what species these cuties are? They were photographed by guide Justin Rhys Nicolau at Rooibank, near Walvis Bay in Namibia. Read on! 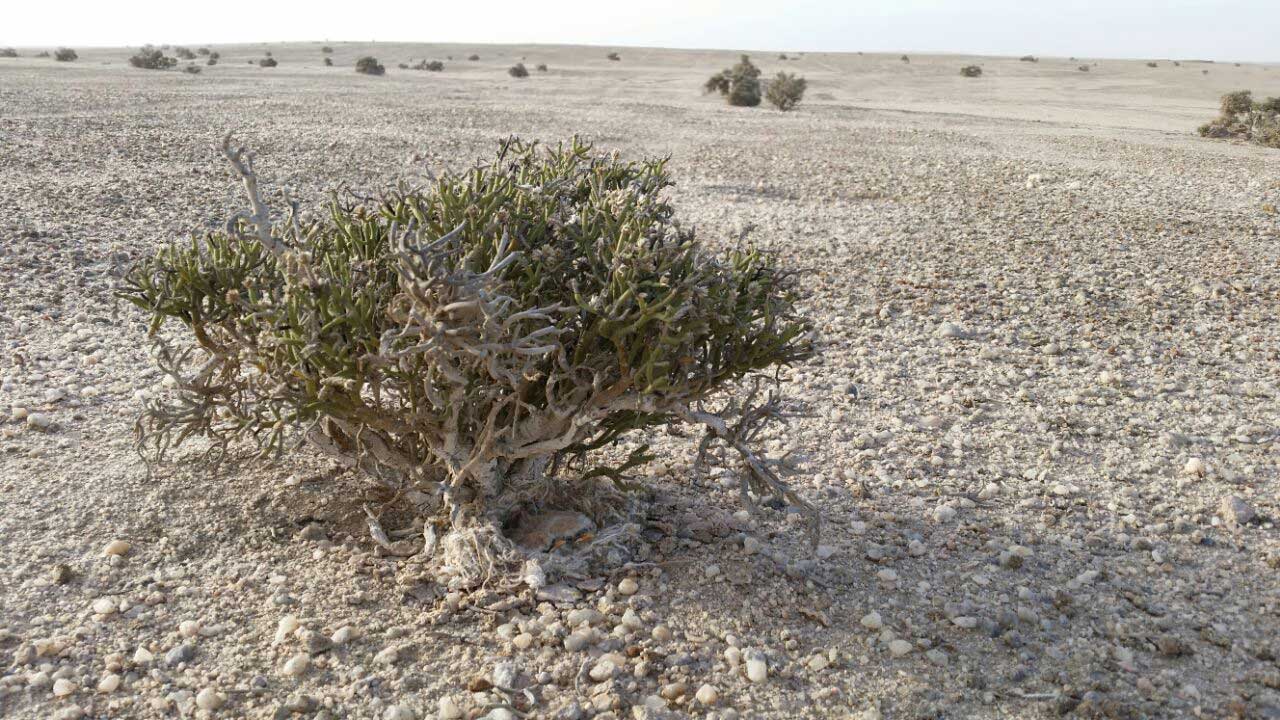 ABOVE: Justin initially didn’t notice the nest, but as luck would have it, he happened to park right next to this particular bush. Fast forward a few months, and you’re reading this blog post. You can see the barren, bleached landscape that this species thrives in. Photo by Justin Rhys Nicolau.

So, what species do these little desert denizens belong to? Let’s see if we can figure it out. Their nest is on the ground, in the meagre shade of a sparse bush on a gravel plain in central Namibia, not far inland from the Atlantic coast, just south of the town of Walvis Bay. The nest placement suggest that it is a terrestrial species. The nest itself is luxuriously constructed of soft fibres, which may be sheep’s wool or strips of artificial material. Indeed, there seems to be piece of string on the left. Under this you can see some darker material which looks like grass inflorescences. There also seems to be some pebbles placed in a ring around the nest.

And what about the chicks themselves? They have striking yellow bills, quite stubby in shape. This is offset against a narrow but obvious black mask, which is bordered above by a white band extending to above the eyes. The remainder of the upperparts are a plain dusty brown. Mmmm… which Nambian bird follows this pattern? White-tailed Shrike? Herero Chat? Capped Wheatear? Grey Tit? Don’t worry, I was stumped as well. After keeping me (and a few of southern Africa’s other birding experts) in the dark for a few hours, Justin Nicolau confirmed that these are baby Gray’s Larks. His photo (taken with a cellphone, by the way) documents a seldom-seen stage of the juvenile plumage of this poorly known species. 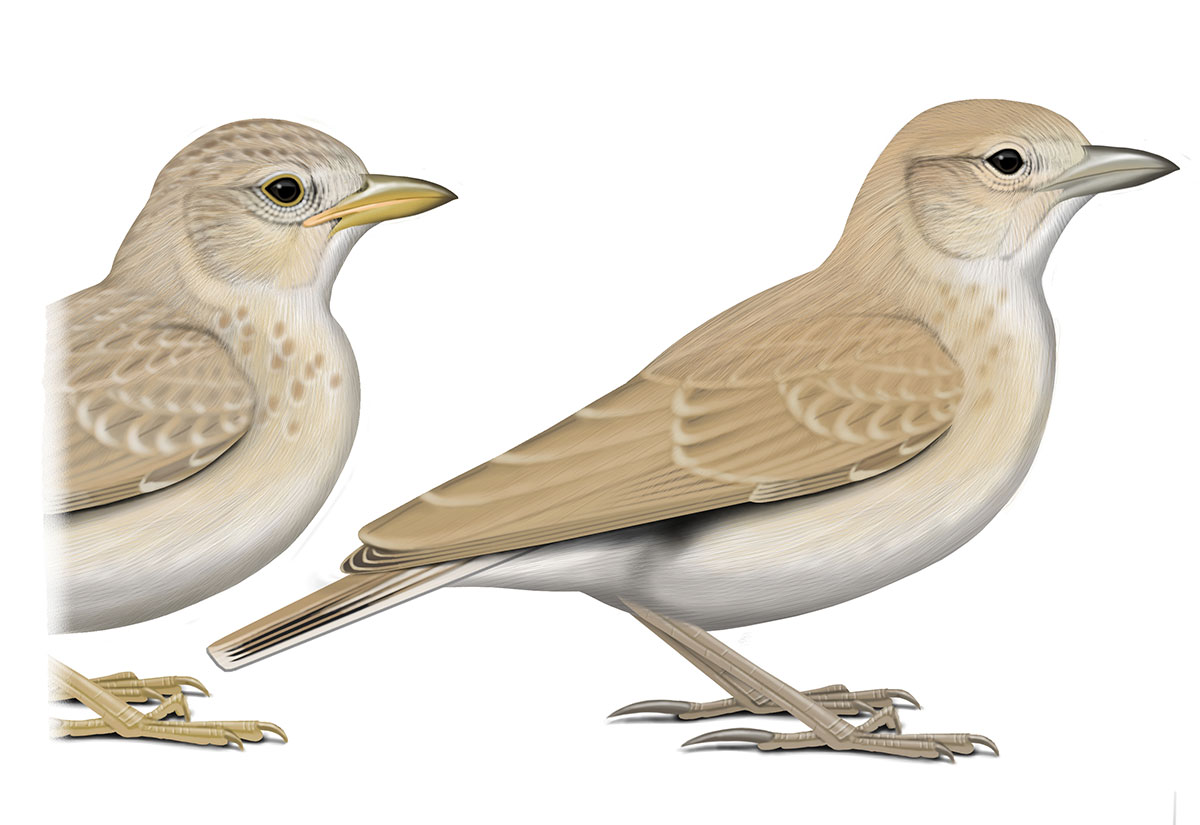 ABOVE: This is the Gray’s Lark plate that I painted for my Chamberlain’s LBJs book (click here to link) about four years ago. The juvenile is shown on the left – I have to admit that I was pleased to see that I show the very yellow beak, the greenish yellow orbital ring of bare skin, and the yellowish legs. I also painted some mottling on the crown and face, which is presumably the black downy feathers of the babies moulting out. You’ll agree that the juveniles actually look quite different than the adults (right). Illustration by Faansie Peacock. 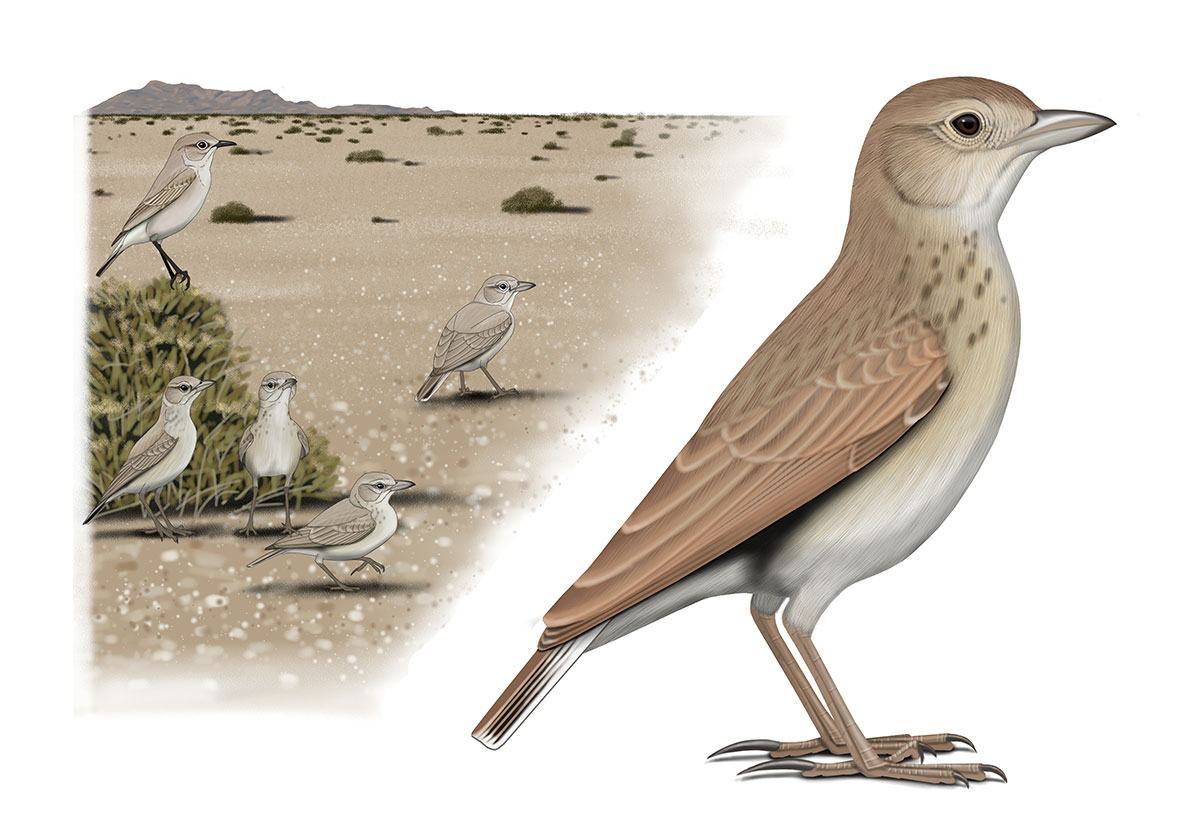 ABOVE: This is the slightly darker brown northern race of Gray’ Lark, Ammomanopsis grayi hoeschi, which is found from Cape Cross in Namibia and into southern Angola. The thumbnail illustration shows a bunch of Gray’s Larks with the lookalike Tractrac Chat, one of the very few other birds that inhabits the bare gravel plains of the Namib. Can you tell which is which? Their typical habitat is visible in the background. These illustrations are from my book Chamberlain’s LBJs book (click here for link). 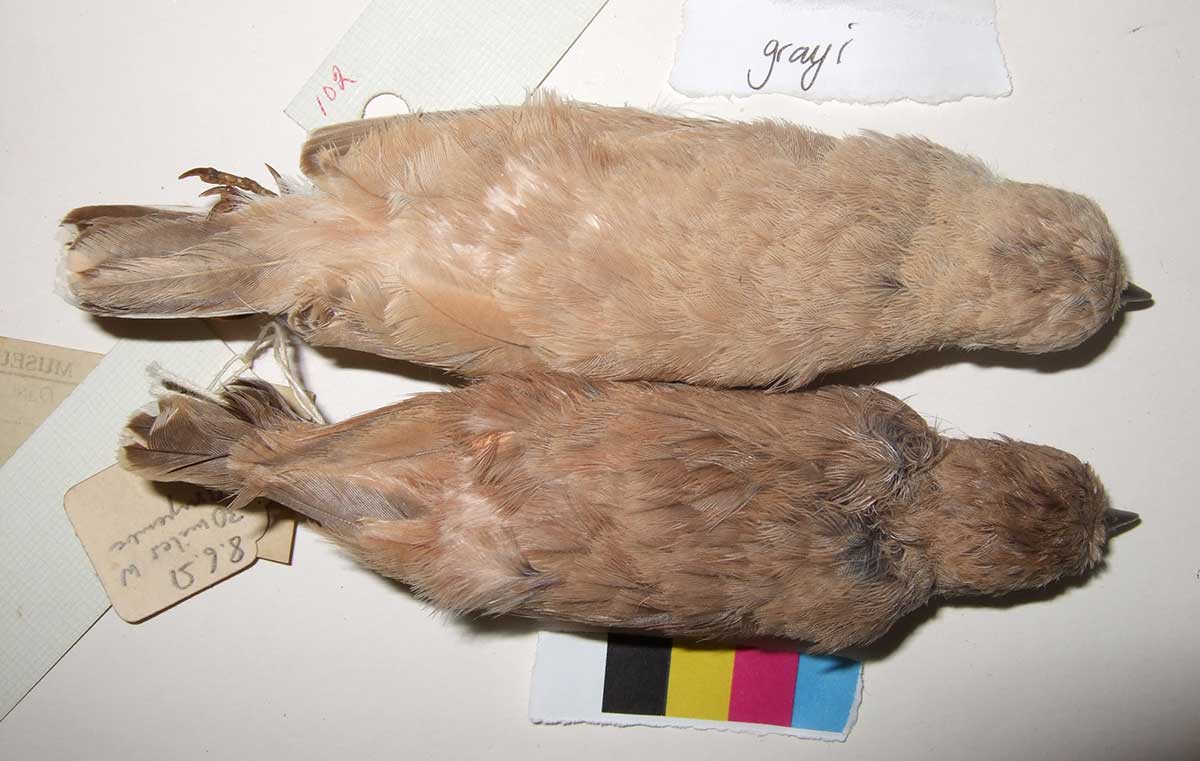 ABOVE: These are study skins from the collection of the Ditsong National Museum of Natural History in Pretoria, showing the two races (subspecies) of Gray’s Lark. The nominate southern race A. grayi grayi is shown at the top, while the darker northern subspecies A. grayi hoeschi is shown at the bottom. Photo by Faansie Peacock.

Gray’s Larks really are special birds. They are a sought-after special for any and all birders visiting Namibia. Fortunately they can be locally abundant within their stark desert habitat. While driving over the endless gravel plains, it often pays off to look in the shade of roadside telephone poles. However, it is only once one stops and gets out of the car when they suddenly appear. What you at first might take for scattered white quartz pebbles suddenly come to life and start scurrying about, as if blown by the wind! The camoflage of Gray’s Larks in this cover-less environment is remarkable, and their plumage is perfectly matched to the colour of the soil and pebbles. Like most other larks, Gray’s are omnivores, with about half the diet consisting of vegetable matter and half consisting of invertebrates. However, young chicks are fed exclusively on insects. They have to work hard to find food, and often bury at the bases of bushes or rocks with their bills, leaving a distinctive pattern in the dirt. They reportedly forage around animal droppings and rodent burrows as well. Indeed, rodent burrows may also offer a refuge from the Namib sun. Heat is also dissipated by standing, often on a low object, with the wings slightly away from the body to expose the thinly feathered flanks and underwings. They seldom drink.

This is a rather social species, and is almost invariably found in family groups or small flocks (average size 3.3, but up to 30). They may also breed co-operatively, or in loose groupings. Paired adults may temporarily leave their group to nest, and rejoin the group once their chicks are old enough to fly. Chicks leave the nest at only 10 days old (thus before they can fly) and follow the adults around on foot. As in most larks, males perform aerial displays at the onset of the breeding season. Perhaps to limit heat stress, song-flights are performed just after sunset and just before dawn and consequently few birders have had the privilege to witness these displays. 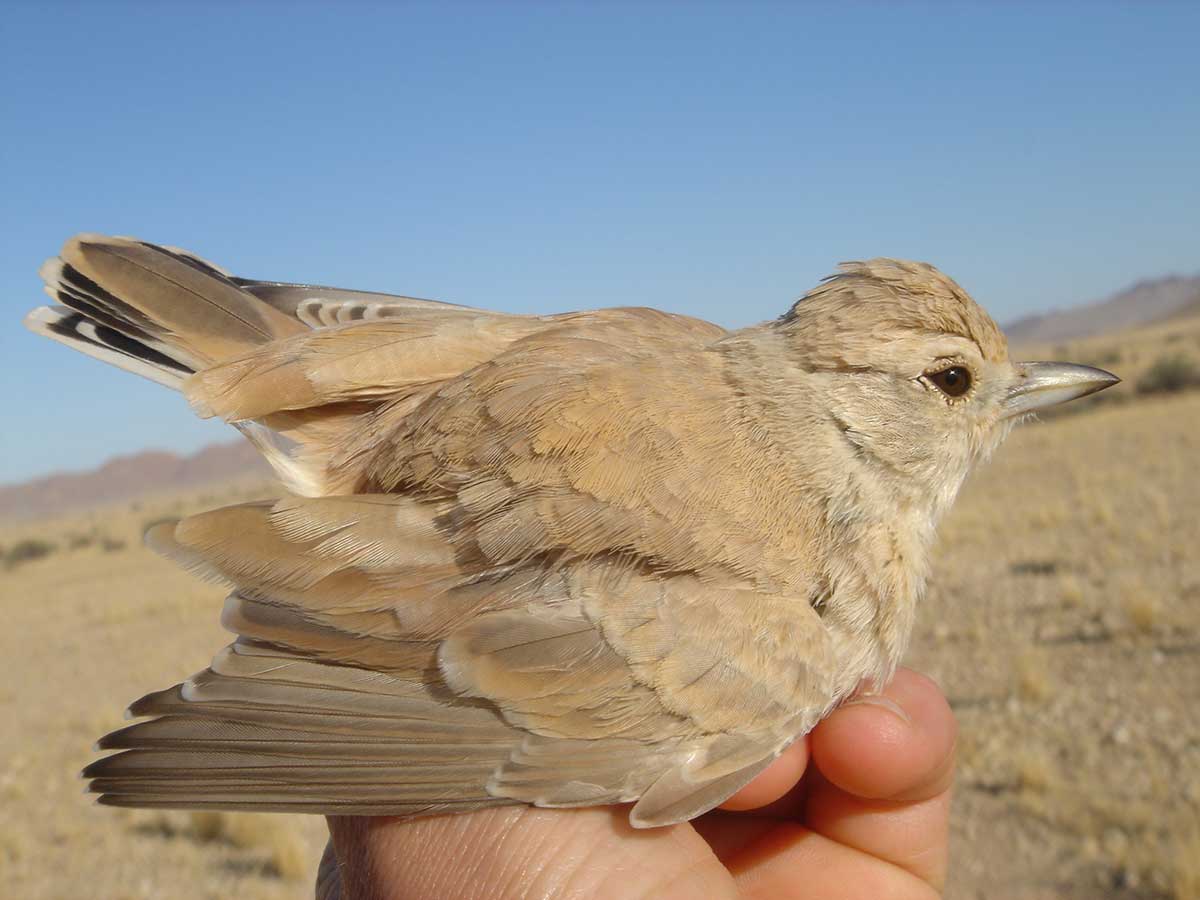 ABOVE: An adult Gray’s Lark. Mature birds have bulbous pale blue-grey bills with slightly darker tips, and completely lack any black on the plumage (except for the tail feathers). Photo by Ursula Bryson. 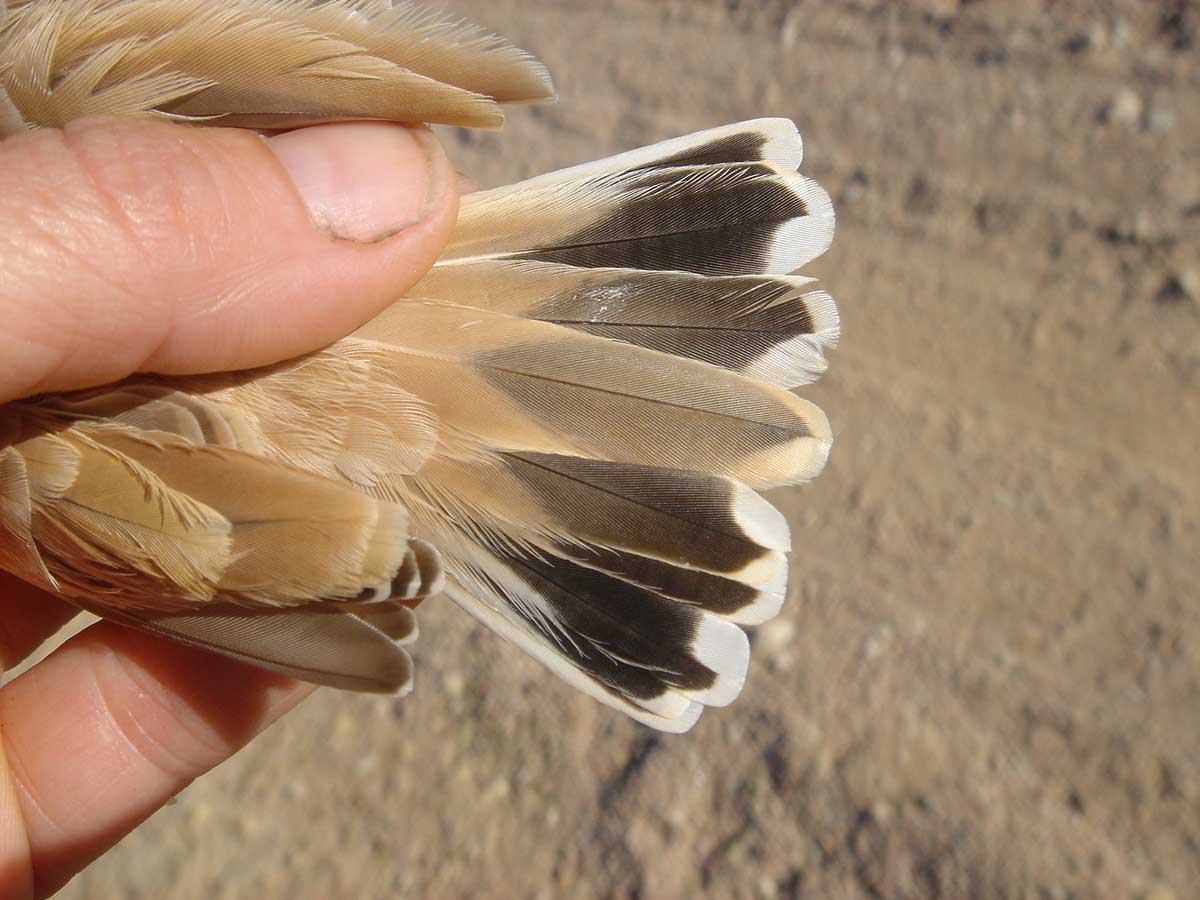 ABOVE: Tail of Gray’s Lark. This pattern combination, with black sides, white edges and white tips is unique among the local lark species. Photo by Ursula Bryson. 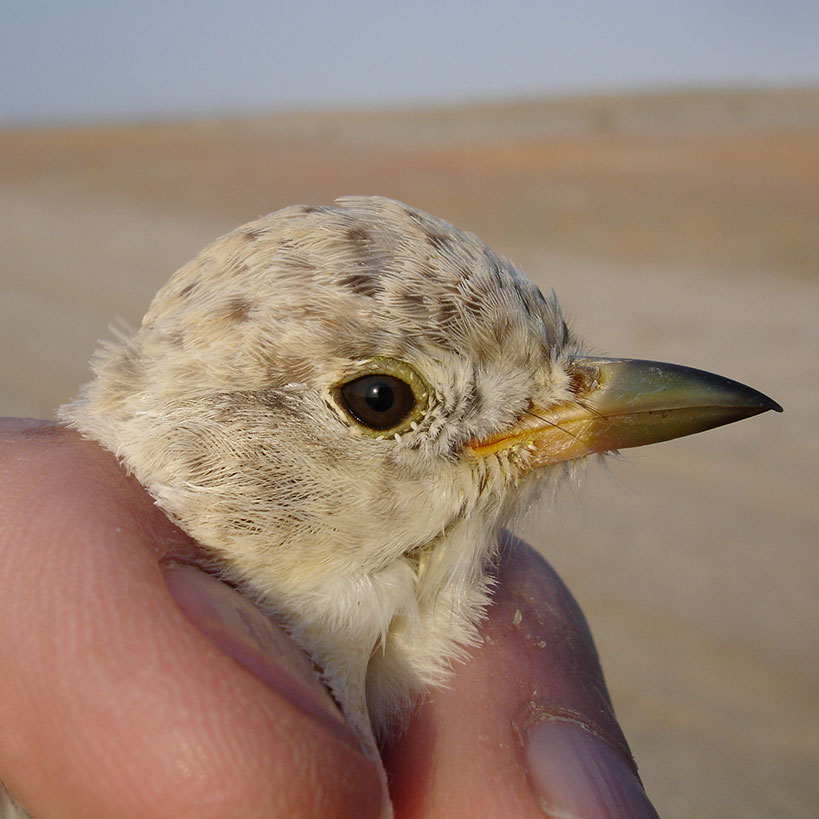 ABOVE: A juvenile Gray’s Lark. The bright yellow bill is obvious (the dark tip is a shadow), as is the greenish yellow ring of bare skin around the eye. Note also the slight mottling on the crown. The bright yellow, slightly swollen gape is also indicative of a juvenile. Photo by Mark Boorman. 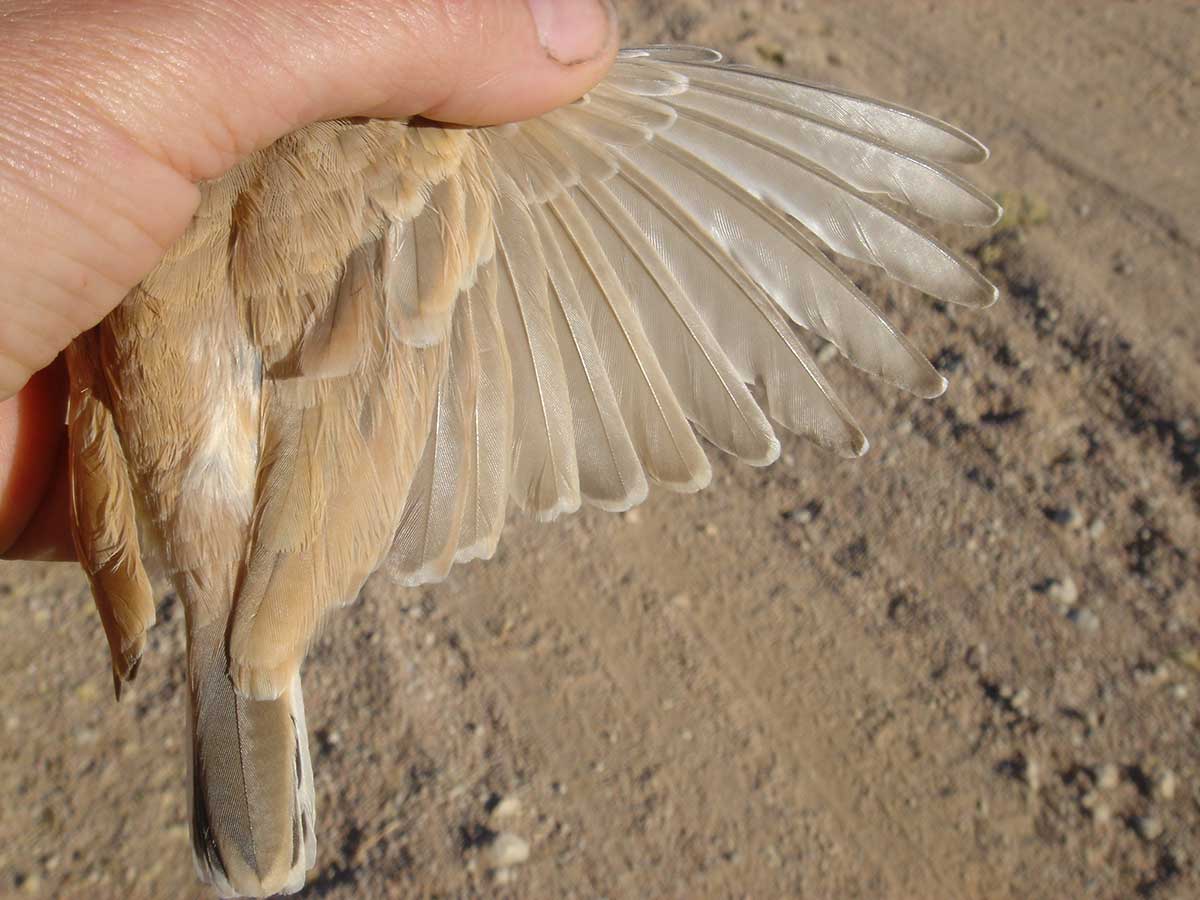 ABOVE: Wing of Gray’s Lark. The species is not migratory, but persistent easterly winds may displace birds towards the coast. Photo by Ursula Bryson. 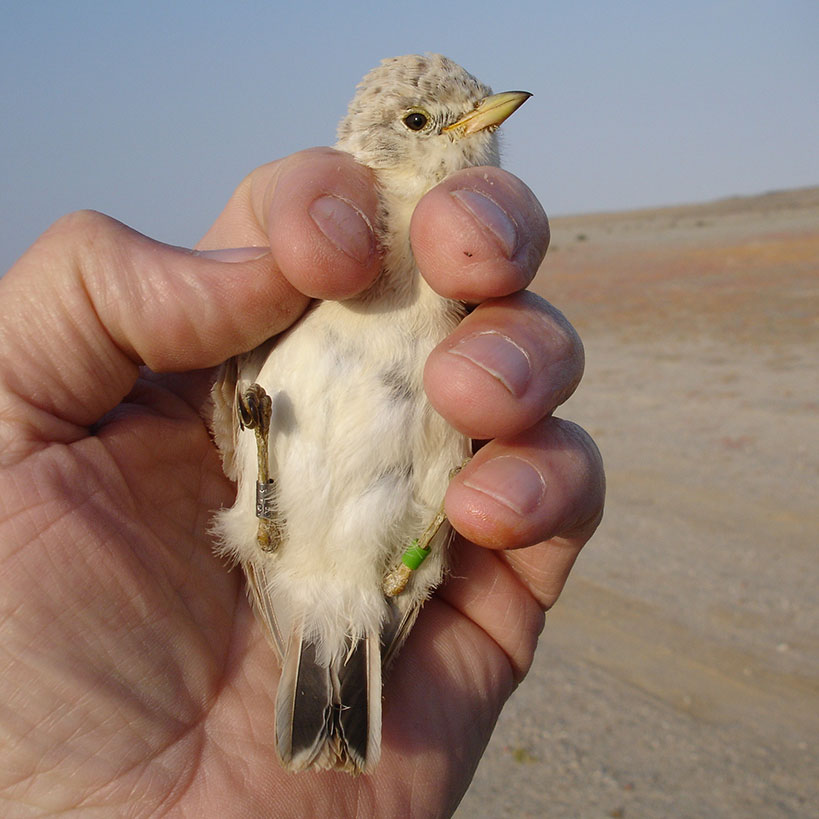 ABOVE: A juvenile Gray’s Lark, showing the yellowish legs (quite different from the grey-brown legs of the adult). This bird is sporting a green colour-ring on its left leg and a standard aluminium ring on its right. Note also the fluffy plumage texture, typical of juvenile birds. Photo by Mark Boorman. 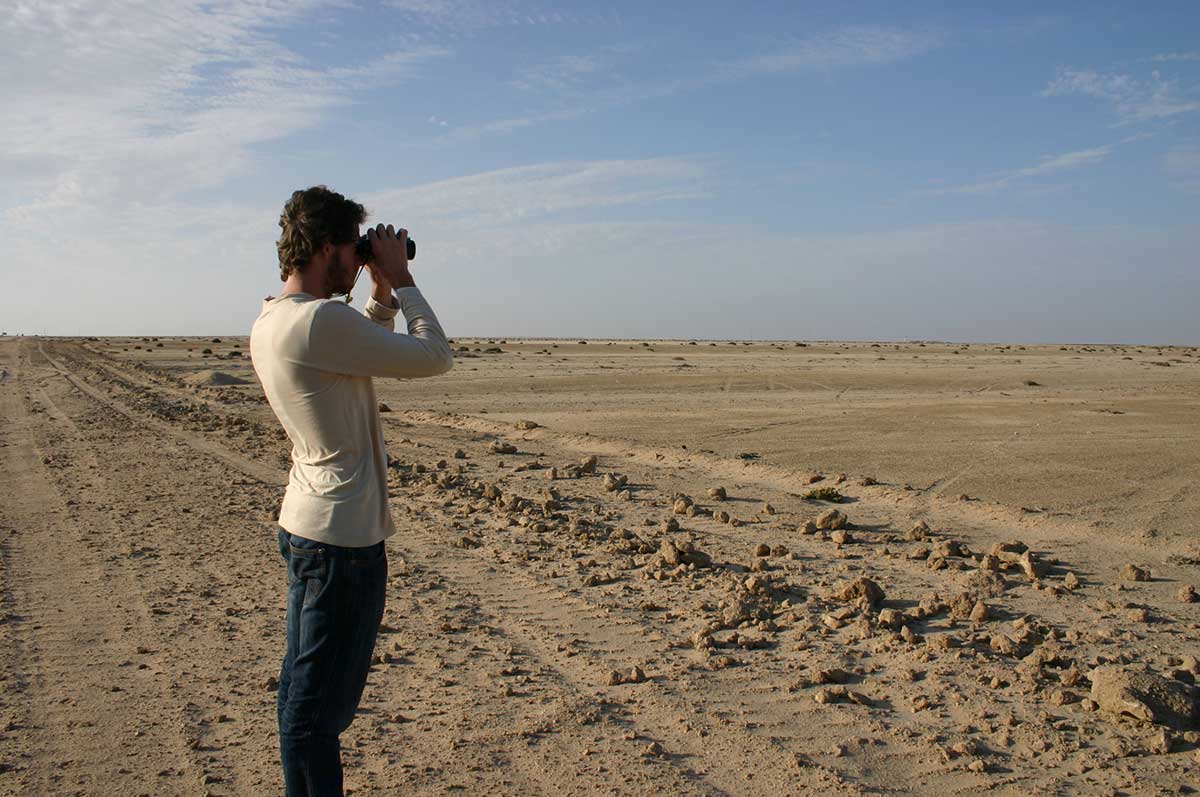 ABOVE: Gray’s Larks are remarkably adapted to eke out an existence on featureless desert plains that are baking during the day and freezing at night. The species is endemic to the Namib Desert, from about Luderitz, Namibia in the south, to south-western Angola, and west of the Namibian escarpment. Here I am demonstrating the complicated methodology for locating Gray’s Larks, i.e. standing still and scanning. Photo by Ronel Peacock (the only other soul in miles!).