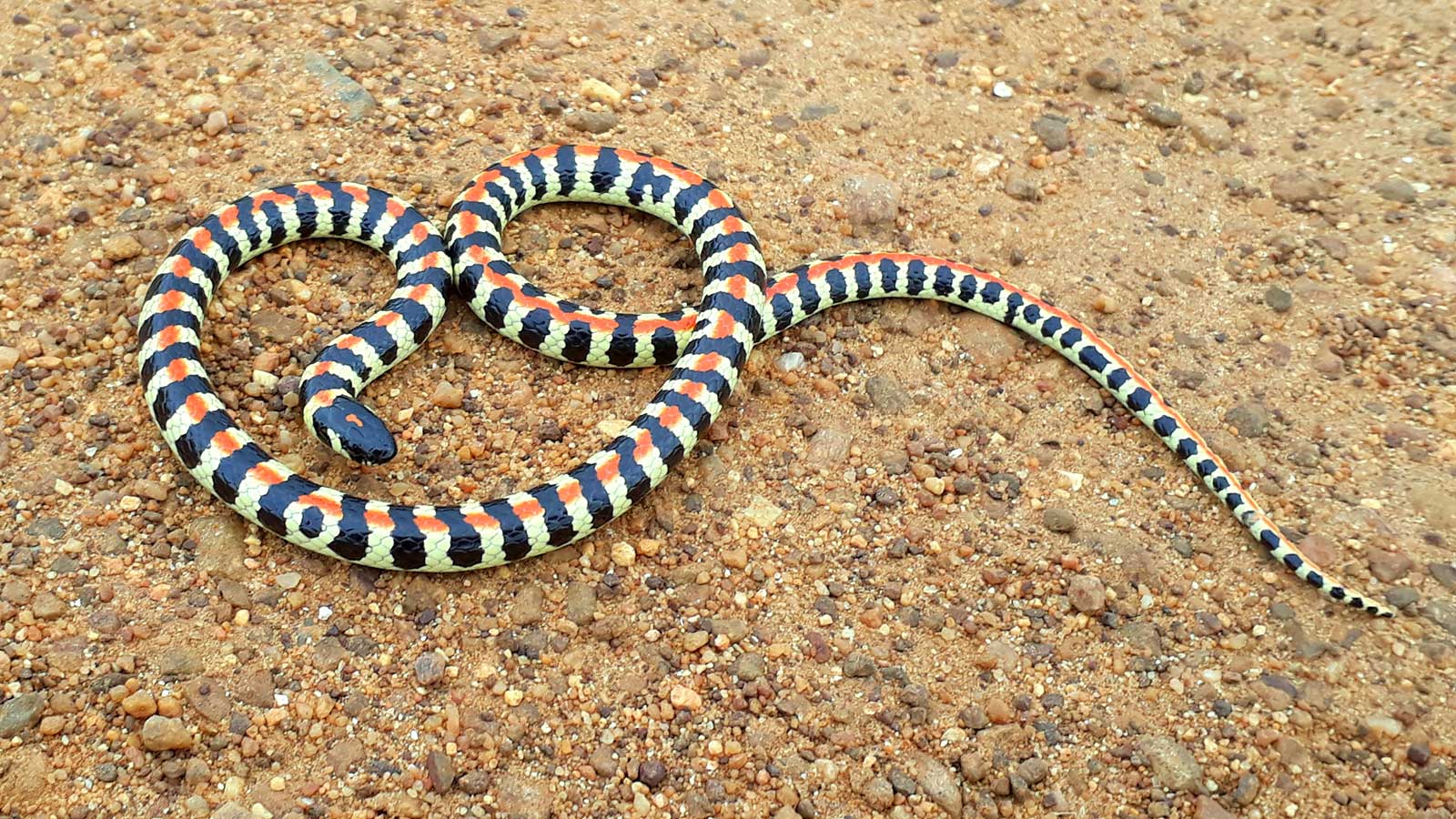 ABOVE: This gorgeous creature is a Spotted Harlequin Snake, Homoroselaps lacteus. Not considered dangerous…gmph.

Finally, some rain on the West Coast. For someone interested in reptiles and amphibians, this means there is some good herping to be had! If you’re wondering what “herping” means – see my explanation on herping lingo for definitions. My friend Nick Schaller and I had enjoyed some good fossicking around Langebaan, with Western Dwarf Chameleons, Sand Rain Frogs and even a way-out-of-range Arum Lily Reed Frog. Nick also happened to mention that he found some harlequin snakes in the West Coast National Park. As a partly fossorial species, Harlequin Snakes are often easier to find after rains, and I headed out that afternoon to go and find one for myself. This was easier done than said, and within seconds I found a stunningly colourful individual under a rock just outside Langebaan town. I was ecstatic! I had never seen one before, and this is arguably the most attractive of all South Africa’s snakes. The species exhibits incredible variation in terms of their colours and markings, with many combinations of yellow black and red, each more beautiful than the last. West Coast harlequins are typically yellow, with broad black crossbars along the entire length of the body, accentuated by a red spine.

Harlequin Snakes are described as only mildly venomous, and I have never heard of any serious bites or effects from this species. So it didn’t really cross my mind that I might soon be making a contribution to our knowledge of the venom of this species, when I reached out to pick it up. It was about 25 cm in length (probably a sub-adult; 30-40 is typical for an adult; max length 65 cm). True to form, the snake was very docile while I got some pictures of it. It made some rapid, jerky movements and tried to slither away speedily, but it did pose well for a minute or two. I then picked it up to release it back under its rock, and noticed a very slight stinging sensation on my hand. Looking down, I discovered this little guy chewing away at the soft flesh between my left thumb and forefinger. It seemed to be having some trouble latching on, given its small head and narrow gape, and it briefly released me and then went in for another sort of slow-motion strike. I did not want to yank the snake off, in fear of hurting it, so I just let it chew away. I figured that the venom would not affect me to any great extent, and that at least the snake would get some closure. It released, and I released it, and it returned to its rupicolous refuge. But this is where the story gets a little more interesting. 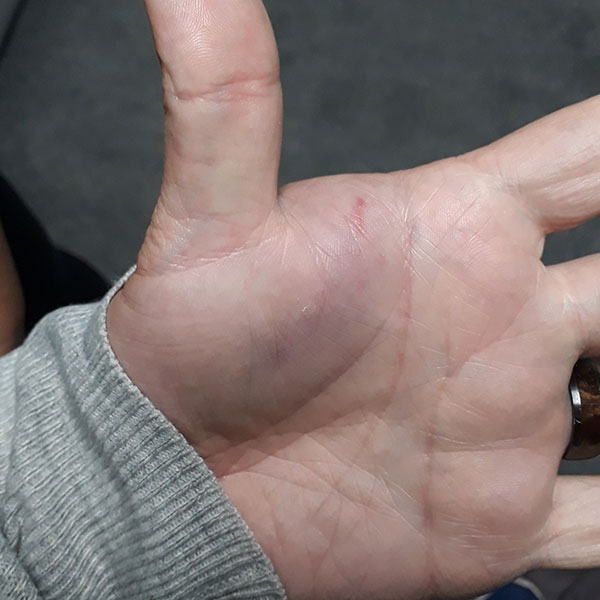 ABOVE: This was about 6 hours after the bite. You can see the small red area around the puncture marks towards the top, and a little bit of general swelling around the base of my thumb. 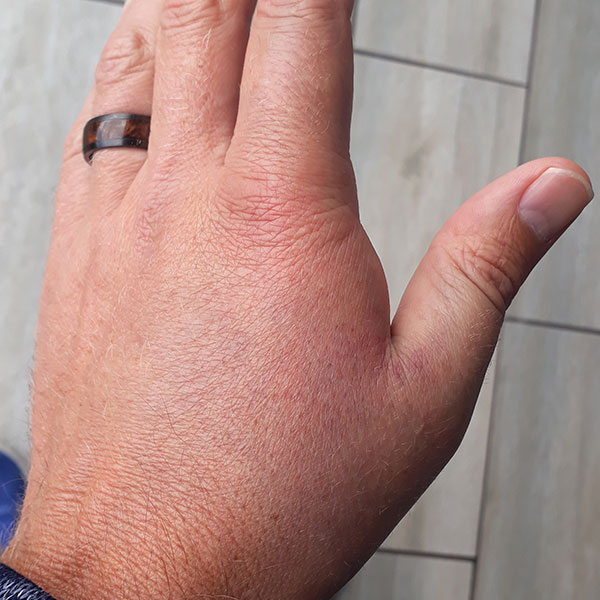 ABOVE: 16 hours after the bite (the next morning). The swelling has increased significantly, with the outside of my hand looking very pudgy. You can also see a little bit of bruising forming in the pores. 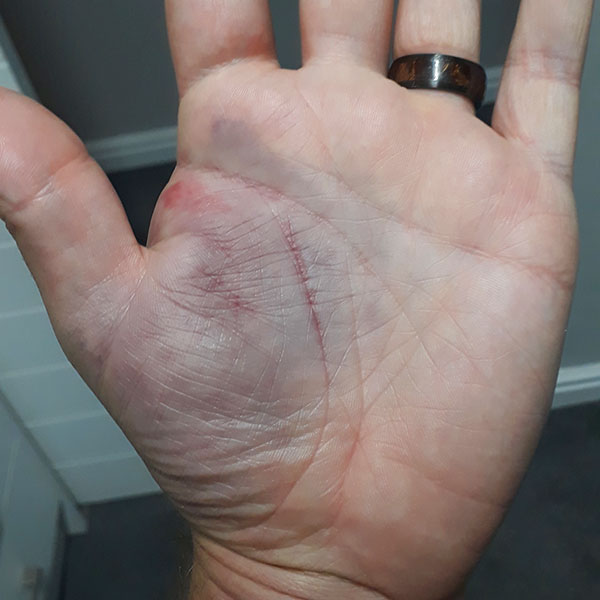 ABOVE: 32 hours after the bite (the next night). The swelling is still increasing, but slowly. However, there was now a lot of bruising visible on my palm, extending all around my hand. The bite marks are a little inflamed. 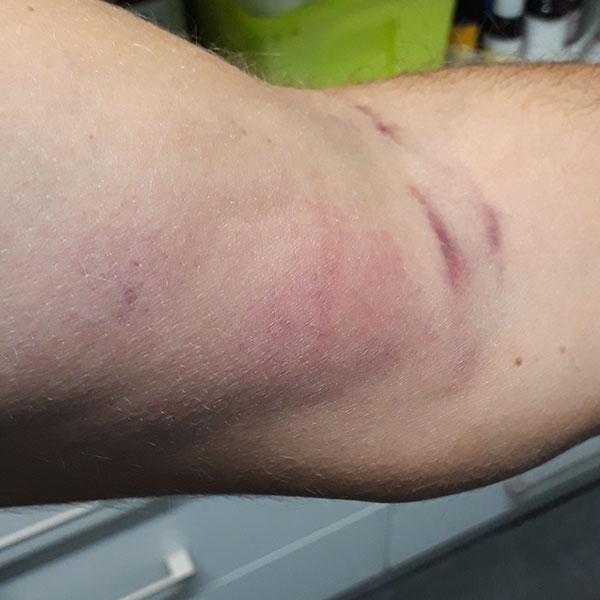 ABOVE: 32 hours. A little more concering, was that the effects of the venom had now traveled up to my elbow and bicep, causing severe stiffness and a consequent lack of mobility. At this point I took some painkillers. 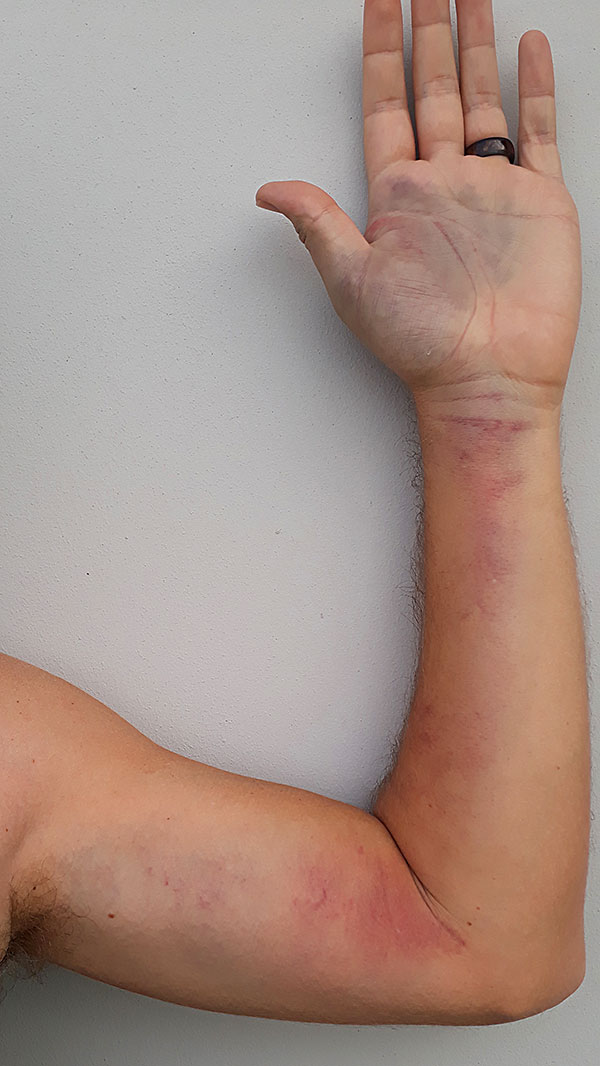 ABOVE: 41 hours after the bite. There was now a continuous angry red band from my hand to armpit. The bruising on my hand had spread across most of my palm. My finger joints were quite painful. I couldn’t open olive jars. 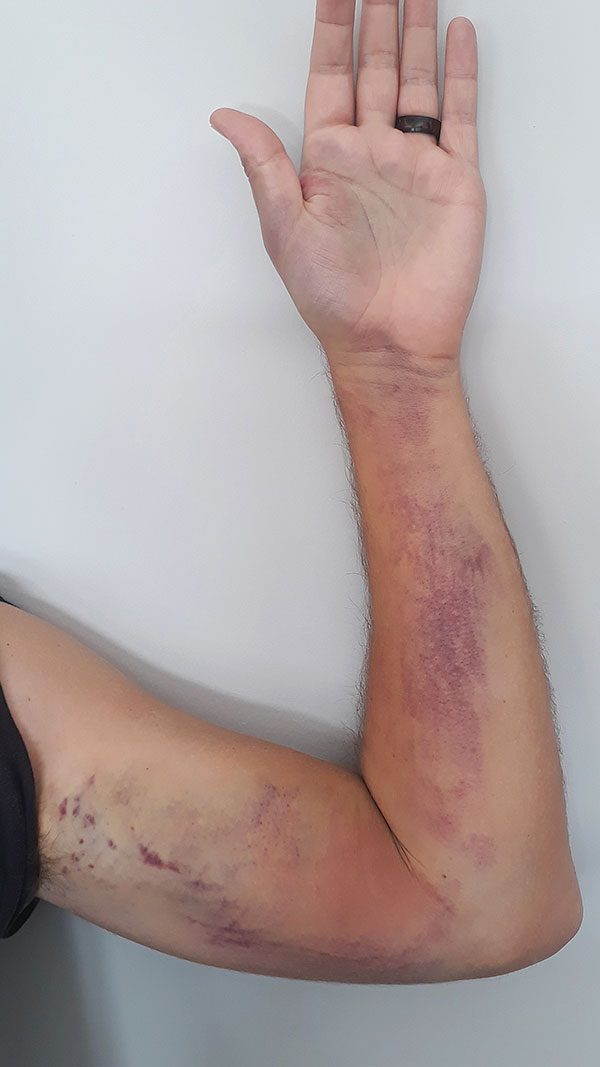 ABOVE: 65 hours (2,5 days) after the bite. At this point my wife and friends’ urging that I go see a doctor started to sound like a reasonable idea. The main problem now was that I couldn’t really use my fingers or bend my arm. Fun. 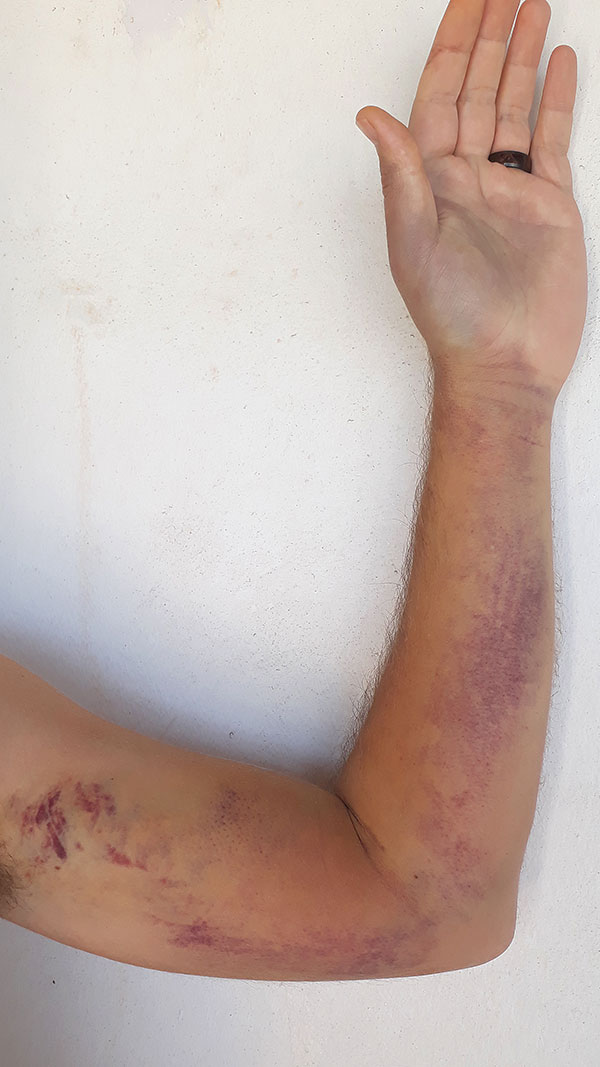 ABOVE: 4 days after the bite. Not much change from the last day or two; perhaps a little bit more bruising. But the pain was quite bearable at this point, and it made for some badass photos. 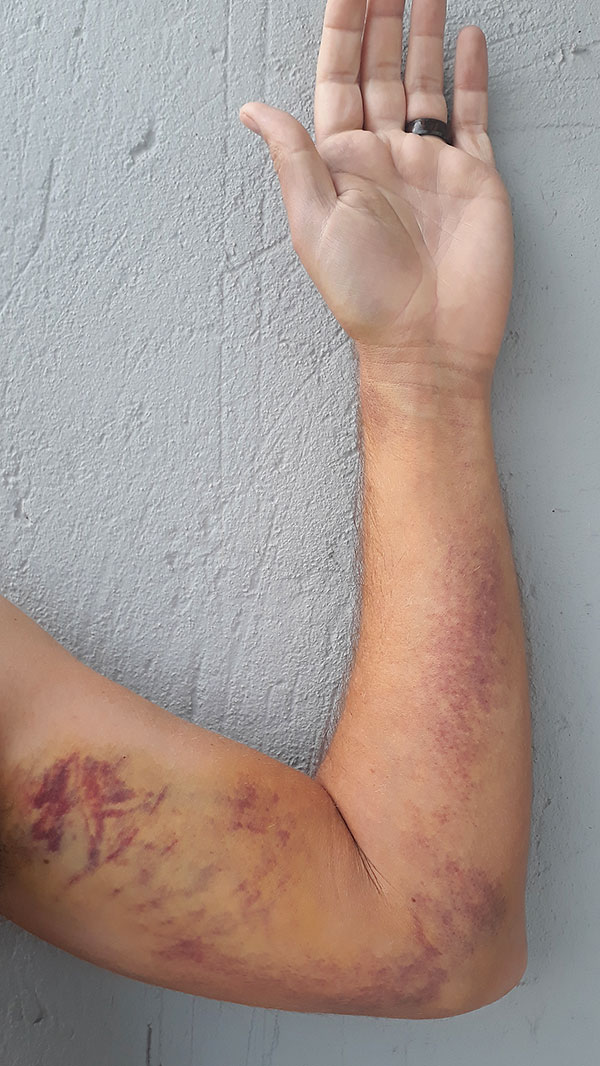 ABOVE: 6 days after the bite. It still looks bad, but it feels much better. The swelling has largely subsided, mobility is increasing, and the stiffness is essentially gone. You can see the bruises have started turning yellow – gross!

My sincere apologies for all these gory photos, but hey, it’s science. In summary, these were the symptoms.

My friend James Harvey is a fellow harlequin-bite-survivor. His reported symptoms are almost identical to mine, although it sounds like he had less severe bruising, and perhaps more painful axillary glands. Headaches and general fatigue have been reported, but I cannot say that I experienced this. I did learn from this experience: it’s always a good idea to pick up snakes with your non-dominant hand. Just in case. 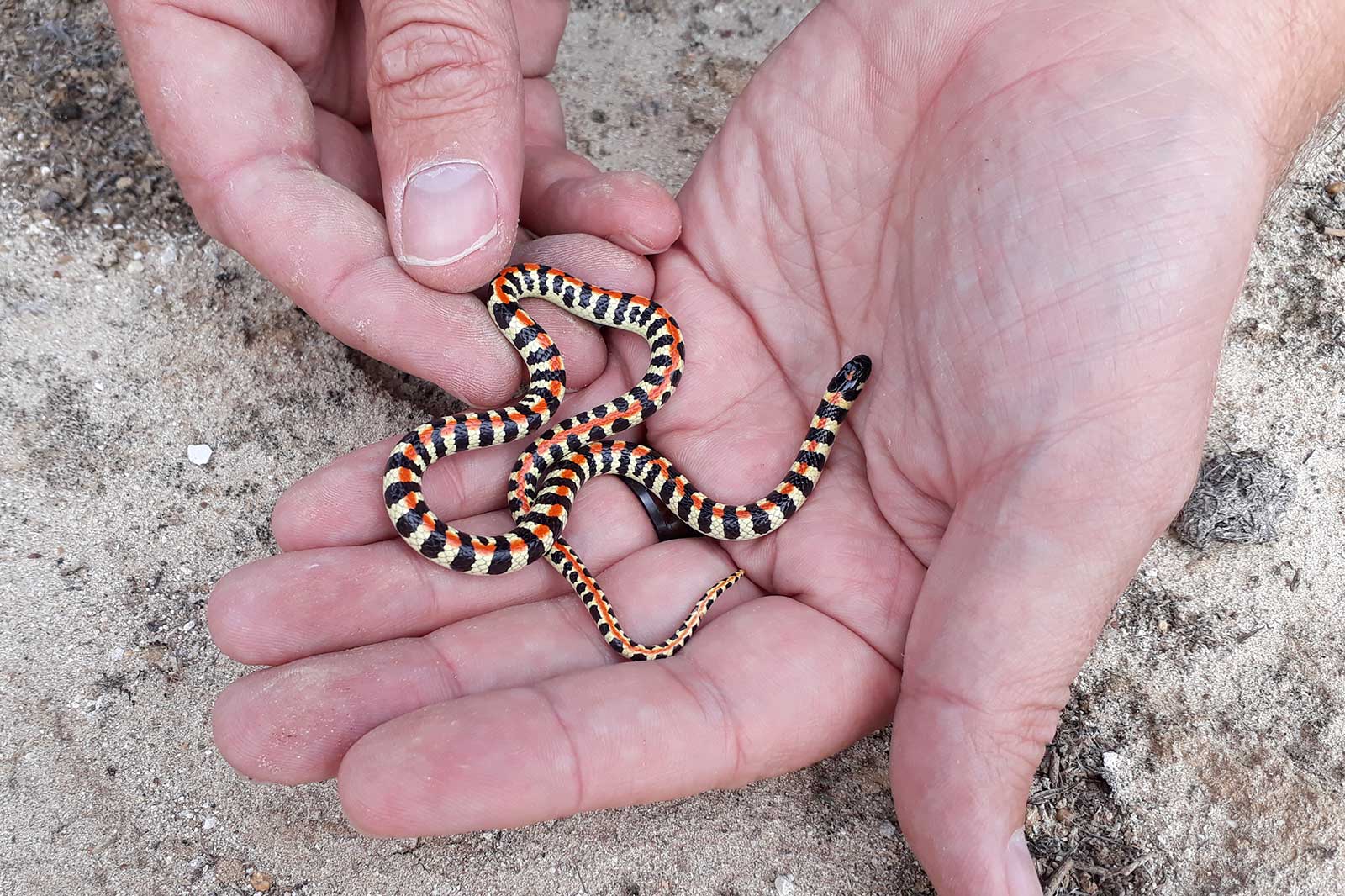 ABOVE: I guess what doesn’t kill you, makes you wiser. Still, I’ll definitely never forget my first sighting of a Spotted Harlequin Snake!