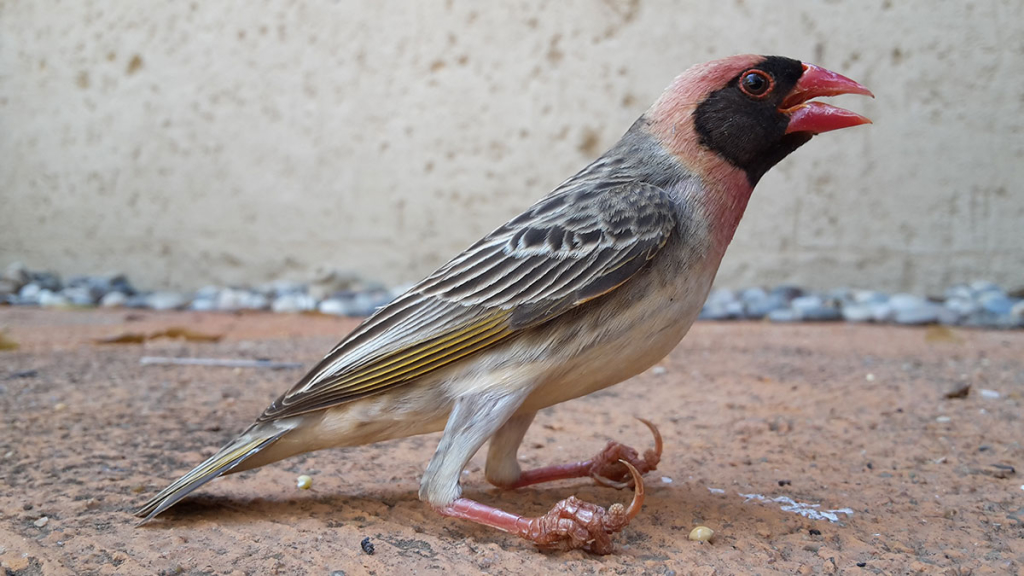 ABOVE: This gorgeous male Red-billed Quelea flew into a window. It was stunned and sat recovering for about five minutes before flying off unharmed. He presented some good photographic opportunities – this image was taken with my cellphone camera, from about 5 cm away. Note the amazingly long and curved hind-claws, the coloured orbital ring (which matches the colour of the bill), and the yellow-edged primaries; the latter feature is useful in distinguishing queleas from bishops and widowbirds.

Africa’s Red-billed Quelea (with the complicated scientific name of Quelea quelea), is probably the most abundant terrestrial bird species in the world. With an estimated breeding population of 1.5 billion, these little seed-devourers can cause havoc on the continent’s crop production. The sight of a flock of a million-plus queleas descending on your crops in a smoky cloud must be terrifying to any crop farmer. Depending on rainfall, some 190 millions queleas may reside in South Africa. Some acrobatic avian maths suggest that a flock of 400,000 queleas can consume 1.6 tons of grain per day, amounting to a loss of nearly a million Rand per day. Scary stuff.

So much so, that quelea numbers are controlled in some areas with crops such as wheat, sorghum, millet, manna, sunflowers, peas, buckwheat, rice and oats. [Sensitive readers beware] the two main culling methods are explosions/fires in roosting colonies, and aerial spraying of avicide poisons. Such extreme measures obviously have a lot of accidental mortality (collateral damage), so more environmentally friendly control methods are employed in sensitive areas. Alternative methods of controlling quelea number sinclude harvesting of quelea chicks, trapping birds with nets, chasing, creating roosts in other areas, altering foraging and roosting habitats, repellent chemicals, planting resistant cultivars and varying timing of planting.

Even so, the annual mortality of queleas resulting from control actions is somewhere around 100 million birds. Nevertheless, despite these high rates the overall quelea population seems remarkably resilient, and there is little long-term effect on their populations. This is in part due to their rapid breeding cycle and their ability to undertake nomadic wanderings in search of food.

Everybody is quick to point the finger at aliens such as mynas, parakeets and pigeons, but queleas can also be seen as ‘alien invaders’ in some sense. With the intensification of agriculture (crop planting, irrigation etc.) throughout South Africa, queleas have ‘invaded’ areas where they previously didn’t occur. In recent years their range has expanded in areas such as the Karoo, Eastern Cape, KZN Midlands and Western Cape.

A wheeling flock of queleas, wafting about the African sky like a column of smoke, is an awe-inspiring sight. But when we arrived at Vaalkop Dam, near Brits in South Africa’s North West Province this December, queleas were conspicuous in their absence. I had optimistically bought 40 kg of mixed bird seed for the two weeks we would be spending in the bush. Within hours the first few kilos has been devoured; but not by birds! Kudus, Warthogs, Vervet Monkeys and even Tree Squirrels considered the seed a welcome supplement in this dry summer. The next day a few indigobirds had materialised; within a few days their numbers swelled to 16 males (and about 1.5 times as many females/ juveniles). Most of these were Purple Indigobirds judging by their mimicry of their host species, Jameson’s Firefinch. Other members of the Viduidae family, namely Long-tailed Paradise Whydah, Pin-tailed Whydah and Village Indigobird also put in an appearance. Interestingly, none of the host species of these parasites were seen in the area.

The queleas came on the third day. First in drips and drabs that went unnoticed between the indigobirds, sparrows, buntings, waxbills and the like. But soon there were orange, red or waxy yellow bills everywhere. The behaviour of the feeding flock also changed. As more and more queleas amassed, the flock became increasingly nervous. At the slightest disturbance the flock of 500 or so would take to the air, each bird copying its fleeing neighbour after a nanosecond’s delay. The result is an onslaught of wind, caused by tens of thousands of tiny primaries and secondaries forcing the stuffy air down towards the sun-baked ground, and leaving only jumbled footprints and a few bewildered indigobirds behind. Even before the resultant whirlwind of seed husks and dust settled, the bravest (or hungriest) queleas would timidly descend from their leafy sanctuaries. Within seconds the entire flock would be pecking away again in a frantic clicking of bills. There happened to be a window nearby, and queleas would regularly stun themselves temporarily. When we opened the window they flew into the house – resulting in half an hour’s effort to get them down from the rafters. On one memorable occasion a few years ago, a Pearl-spotted Owlet even followed a quelea into the house. Here are some videos to show what you can do with an abundance of queleas, a lot of bird seed and a little patience.

ABOVE: I spent most of my New Years day this year coaxing Red-billed Queleas at Vaalkop Dam into the shape of a six. This involves many, many kilograms of bird seed. If you look carefully you will also see a two in pebbles, a zero in wood and a one in leaves (and a six in queleas), to spell 2016. Towards the middle of the clip one of the queleas almost flies into the window. This happened several times a day, presenting good photographic opportunities (such as the bird above).

ABOVE: When I sent out the video above someone asked me if the quelea calligraphy was my doing – this was my response.