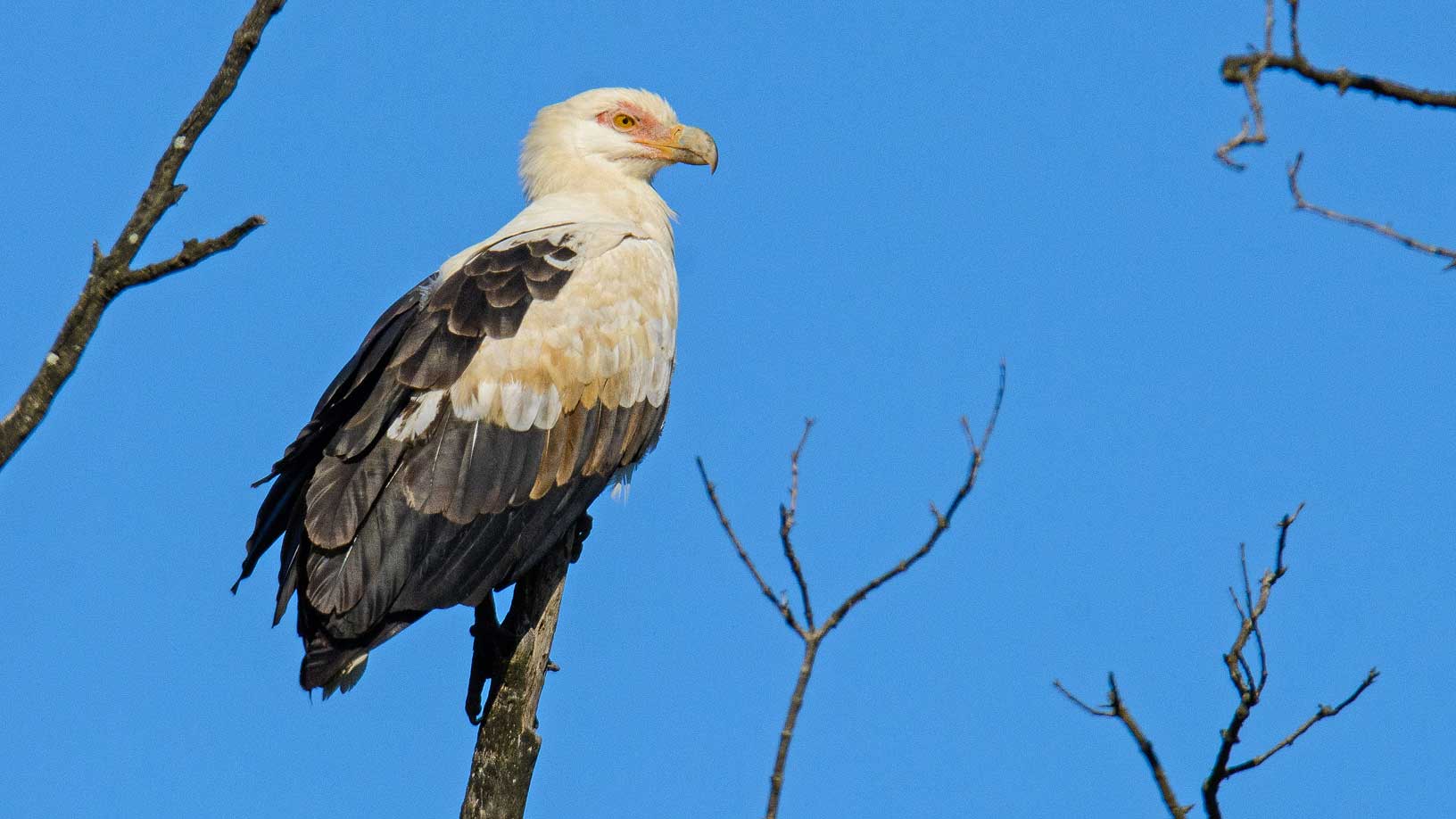 ABOVE: Mtunzini is one of the few places in South Africa where one has a reasonable chance of bumping into this odd raptor – the Palmnut Vulture.  The presence of the birds is partly exxplained by the abundance of Raphia palms (Raphia australis) in and around town. The edible orange flesh of the palm fruits make up an important component of the vulture’s diet. In addition, they will also eat crabs on beaches or mudflats. However, they are quite opportunistic feeders, and may also feed on insects, fruit, rodents, frogs, snails and roadkill. Photo by Dylan Vasapolli.

For three days this April, I rather abruptly found myself in Mtunzini on KwaZulu-Natal’s north coast. It was one of those holidays that you book months in advance, then sort of forget about until they creep up on you a week before you’re supposed to go. Not that I’m complaining about such first-world problems. This was a family trip, so my three year old and nine month old sons accompanied us everywhere (although I did sneak away one morning to do some sound recording). We really enjoyed our short stay and we were impressed with Mtunzini as a nature-orientated destination. There is also the added bonus of Ngoye Forest and Dlinza Forest/Eshowe being within 30 minutes’ drive. If you’re looking for a holiday destination may I suggest this picturesque town? Here are some motivators…
. 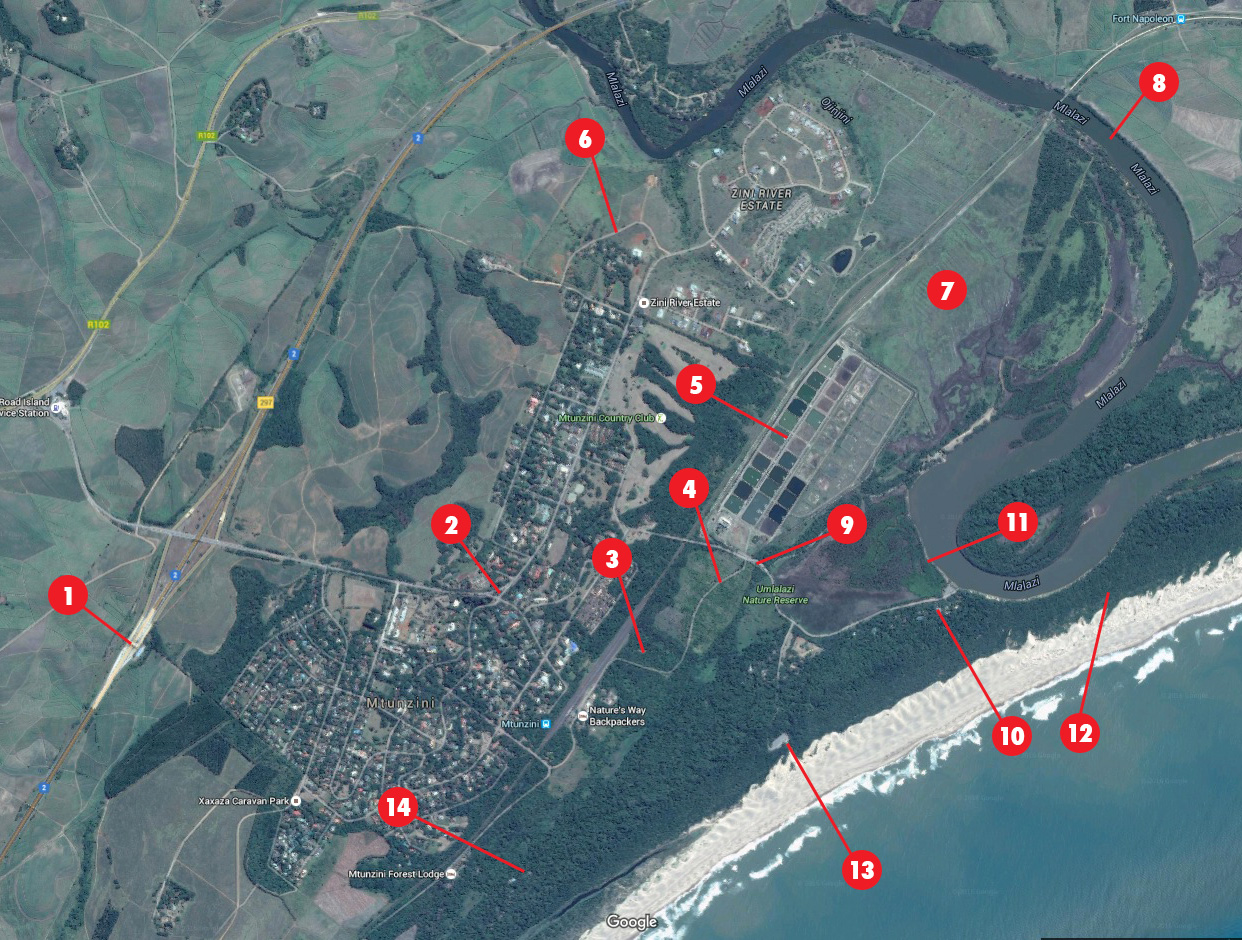 ABOVE: My quick attempt at a Mtunzini birding map. I only spent about three days there, so I’m sure locals would be able to add lots to this. If so, let me know in the comments. You can click on the picture for a slightly bigger version. The numbers are discussed below. 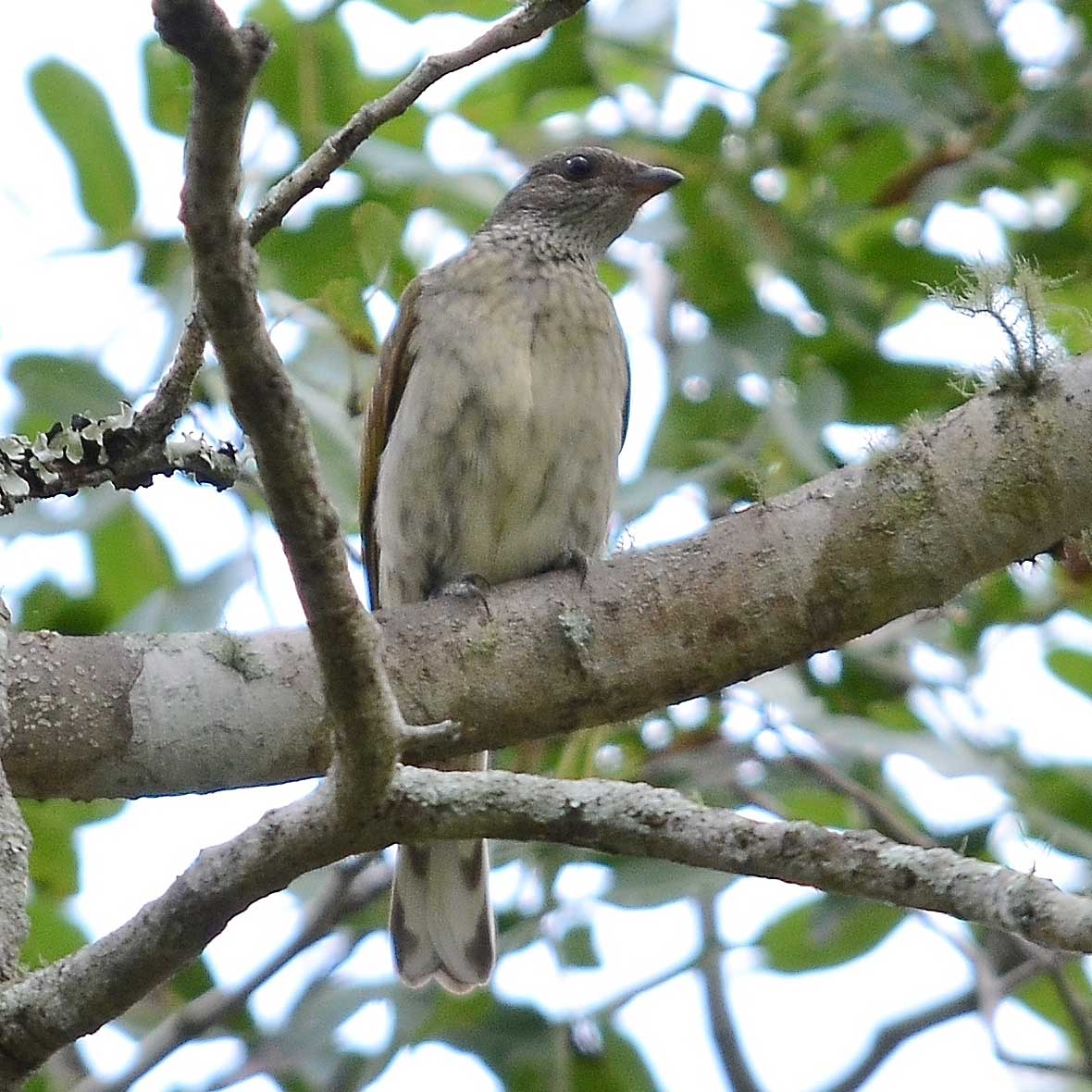 ABOVE: Scaly-throated Honeyguides are brood parasites that dupe forest barbets and woodpeckers into raising its chicks by a series of clever deceptions (perhaps more on that one day). They are best located by listening for their eerie, drawn-out, rising, gurgling calls. One has a call-site near where the Siyaya Trail makes a U-turn to return to the beach car park. Photo by Dylan Vasapolli. 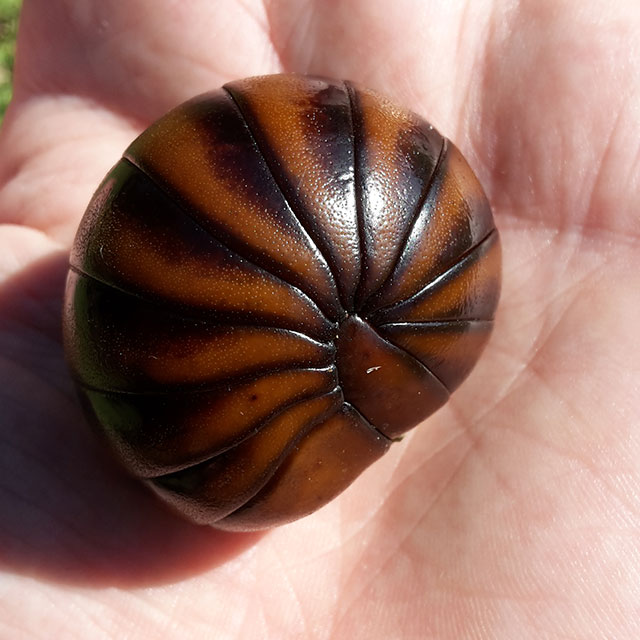 ABOVE: Giant Pill Millipedes (or ‘Pillipedes’ as I dubbed them) mission around on the forest understorey. When rolled up, they are about the size of a ping pong ball. Some interesting stuff here [SANBI Creature link]. Photo by Faansie Peacock. ABOVE: Cute little Red Duikers are a pest in Mtunzini – they are just everywhere, all the time, and super tame! This one is pretending to be a majestic Lechwe running through the Okavango Swamps. Photo by Dylan Vasapolli. 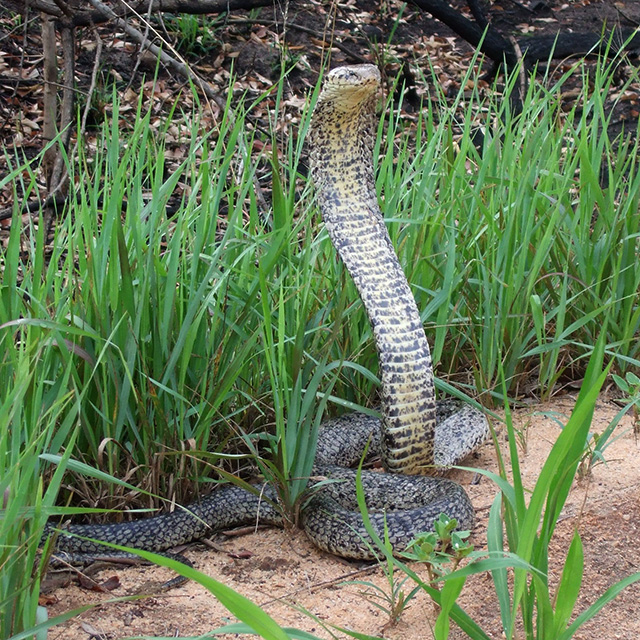 ABOVE: According to the locals, Forest Cobras can be abundant in the Mtunzini area (although this one was actually photographed in central Mozambique). Between these and the Gaboons, you better watch your step. Photo by Faansie Peacock.

While on the topic of snakes, we should talk about Mtunzini’s population of Gaboon Adders Bitis gabonica (often called Gaboon Vipers). These massive and incredibly handsome adders have lost a great deal of their habitat through transformation for agriculture and residential developments. To the extent that they are classified as Near Threatened in the Atlas and Red List of Reptiles of South Africa, Lesotho and Swaziland. As far as I can gather, Mtunzini’s Gaboons were translocated there from Dukuduku Forest near St Lucia, starting from 1995. A 2003 article in the journal Koedoe summarises the situation:

“In 1995, Ezemvelo KwaZulu/Natal Wildlife (EKZNW) approved a project to translocate as many B. gabonica as possible from Dukuduku Forest, to Umlalazi Nature Reserve, since Dukuduku Forest was under serious threat from habitat degradation. Although outside [the Gaboon Adder’s] known range, Umlalazi was considered suitable habitat and was under conservation management. Initially the aims of the project were to capture and translocate 80 snakes. By this time [1998] approximately 200 snakes had been caught, paid for and translocated. The project was terminated due to, among others, concerns about the suitability of Umlalazi, the survival of translocated snakes, and the creation of a market (at R200 each) for a rare animal. The remaining snakes in captivity were released on the eastern shores of Lake St. Lucia.”

Interestingly, the translocation project initially seemed to have failed, with “no sightings of B. gabonica have been reported in the reserve subsequent to the project“. However, fast forward a few years, and Mtunzini’s Gaboon Adder population appears to have exploded! The snakes are now frequently sighted, even on suburban roads on the outskirts of town. An overly dramatic newspaper report in 2008 states that “Gaboon Adders are taking over the back gardens of Mtunzini, and residents are running scared. The snakes have slithered their way from a neighbouring forest into the urban area, and residents have every reason to be worried.” Whatever the case may be, Mtunzini is probably one of the most reliable spots to encounter this spectacular snake. That is easier said than done though, as they have superb camoflage and often bury themselves in leaf litter with only the head protruding.
. 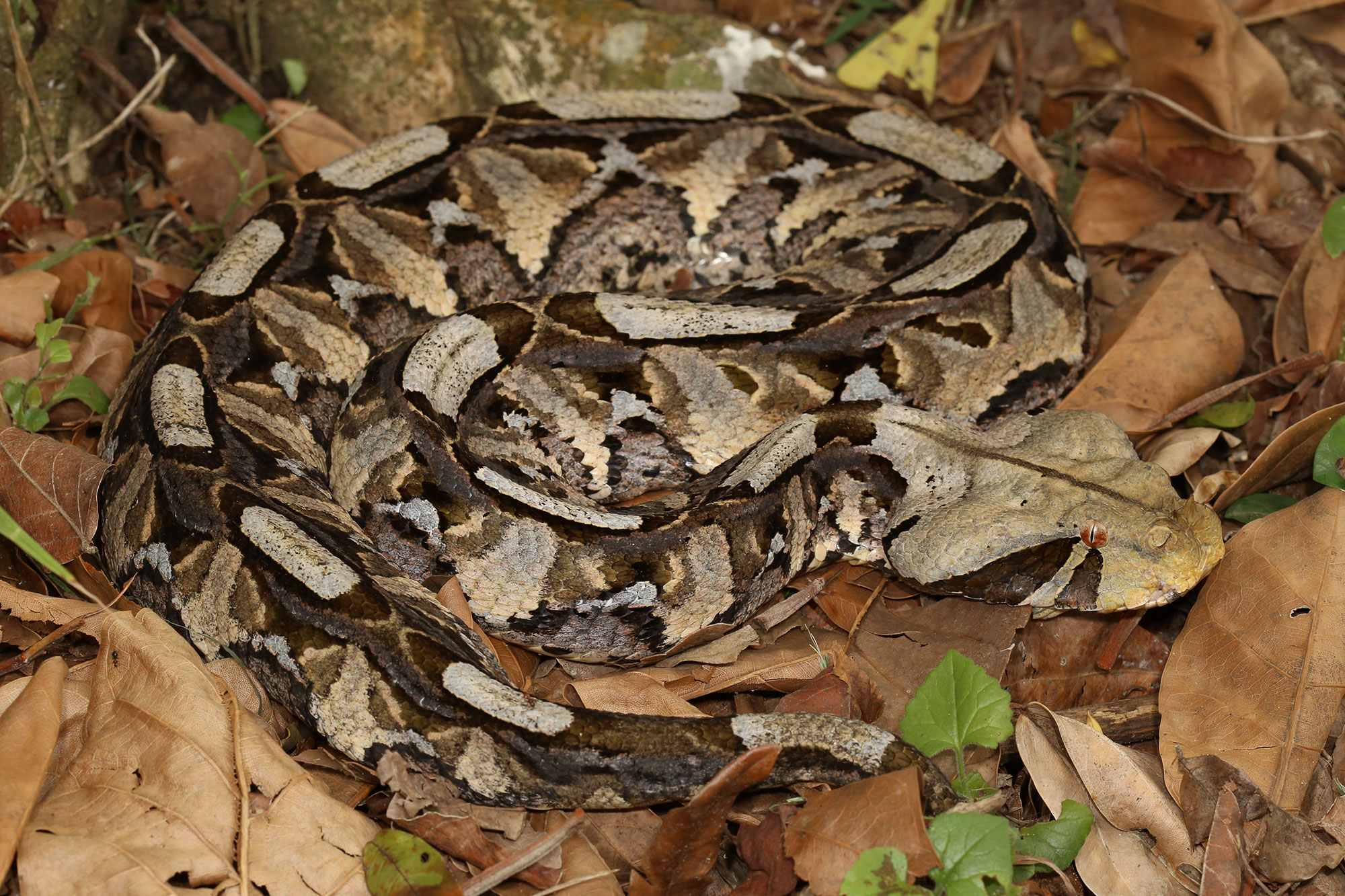 ABOVE: Whether or not Mtunzini’s introduced population of Gaboon Adders are strictly ‘tickable’ is up to you to decide. But that didn’t stop me looking! As you can see, these snakes are extremely difficult to spot unless they move or happen to cross the road. Photo by Nick Evans. 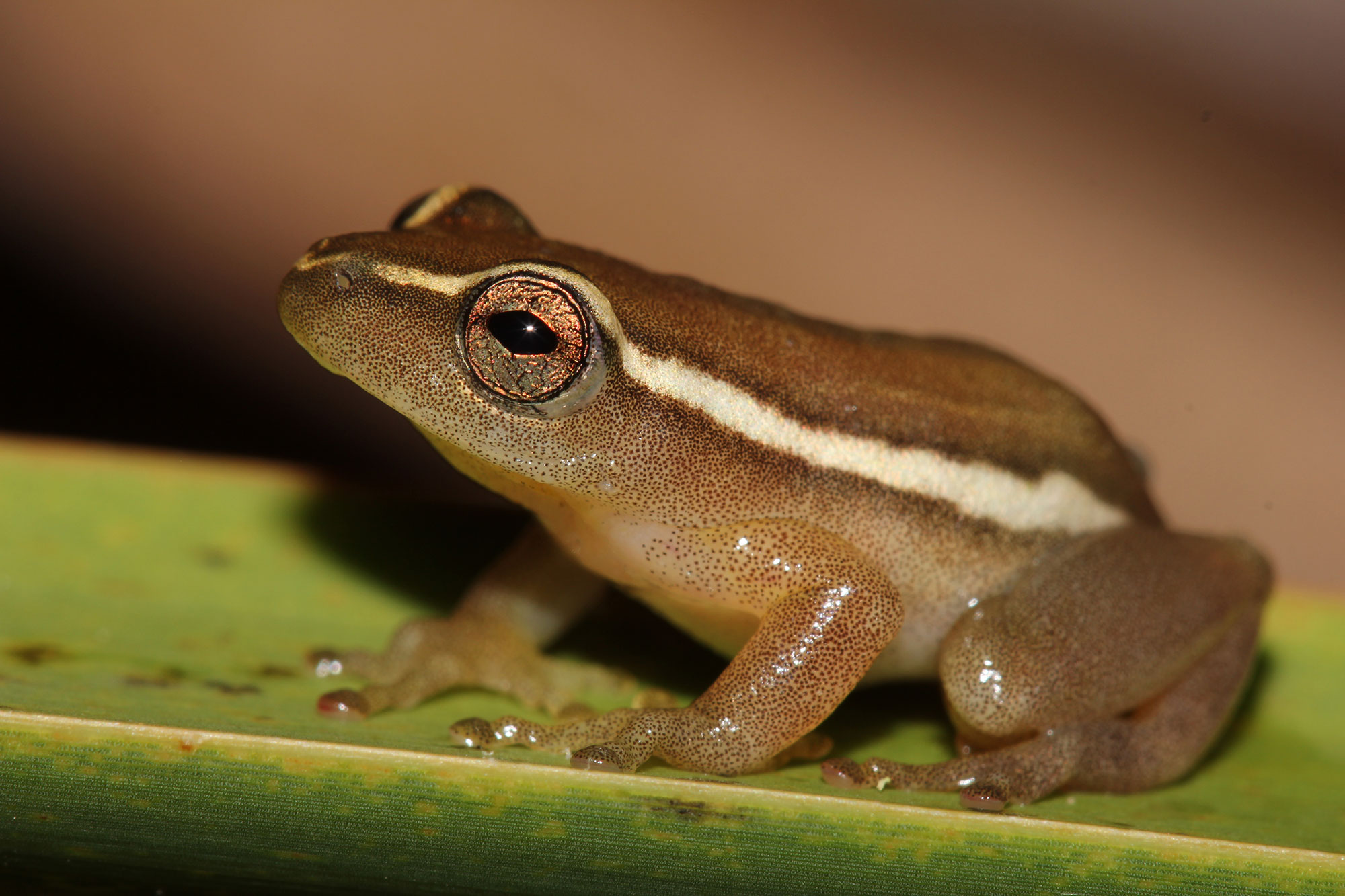 ABOVE: But herping in Mtunzini is by no means restricted to Gaboon Adders. Floodplains here are home to the localised and Endangered Pickersgill’s Reed Frog Hyperolius pickersgilli (male shown here). Photo by Nick Evans. 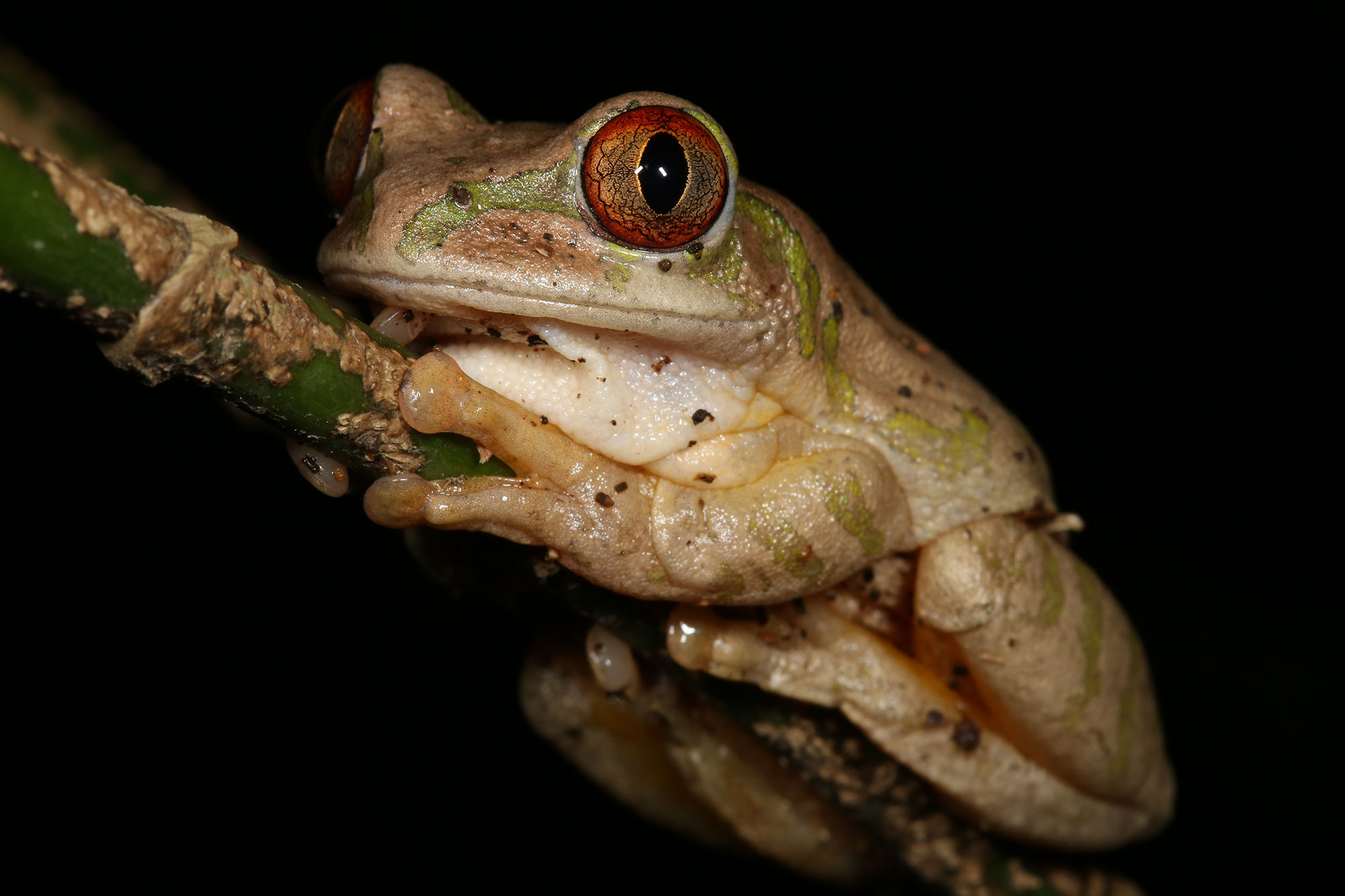 ABOVE: Natal Tree Frogs Leptopelis natalensis, must rank as some of our most attractive frogs. They call and mate in trees, but descend to the ground to bury their eggs in the sand. Photo by Nick Evans. 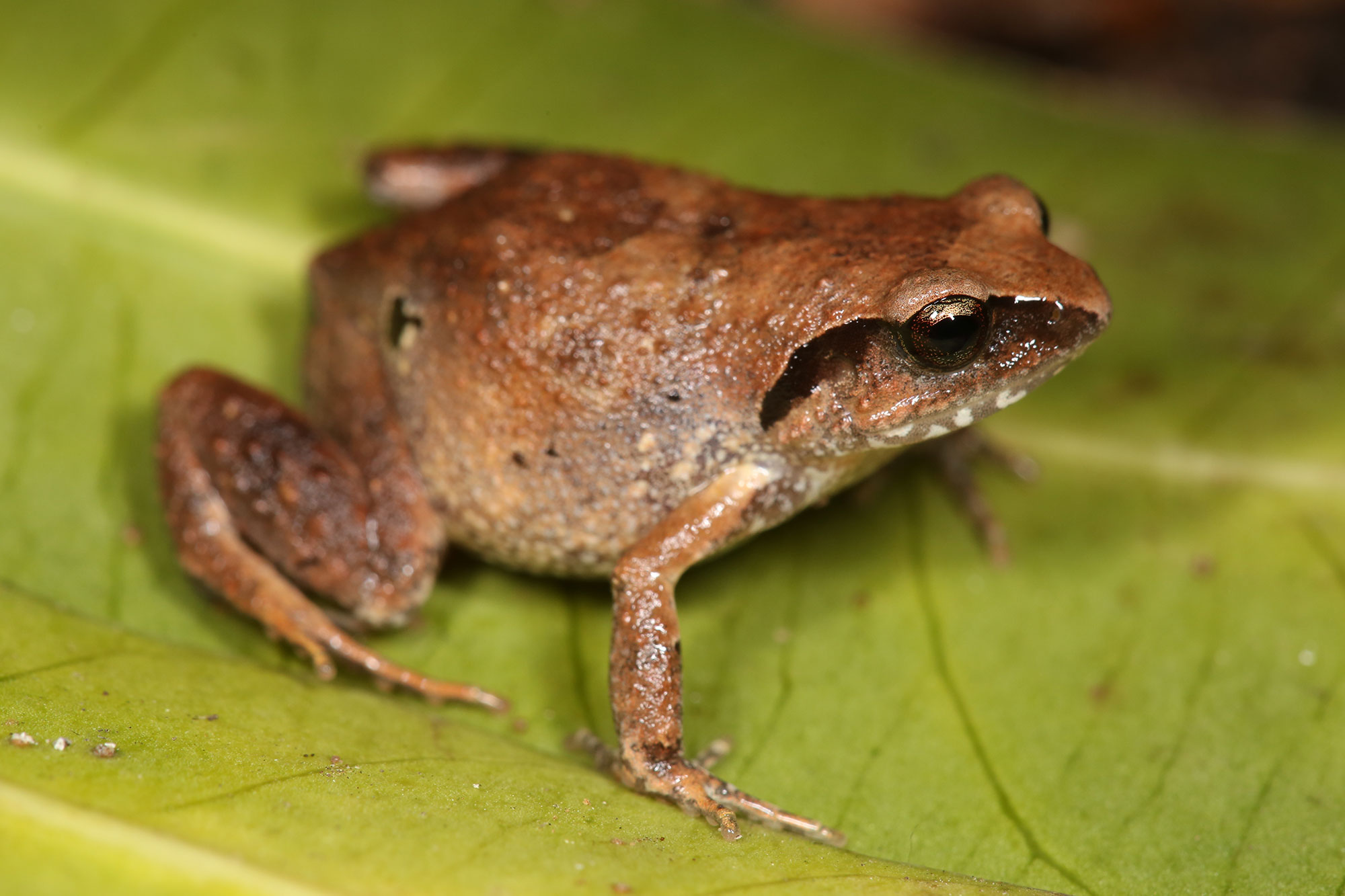 ABOVE: And finally there’s this little phantom, the Bush Squeker Arthroleptis wahlbergi. After even a few drops of rain (or in misty conditions) these tiny frogs start producing their high, wispy weeping sound from the leaf litter of coastal bush. The trick is to actually spot one among the dead leaves… Photo by Nick Evans. 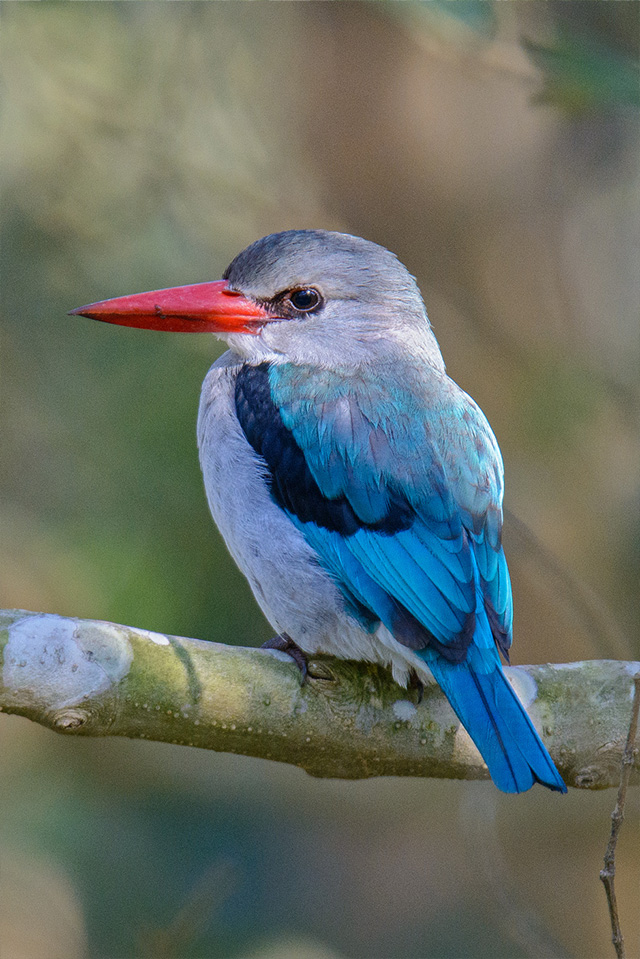 ABOVE: The aptly named Mangrove Kingfisher. Photo by Dylan Vasapolli. 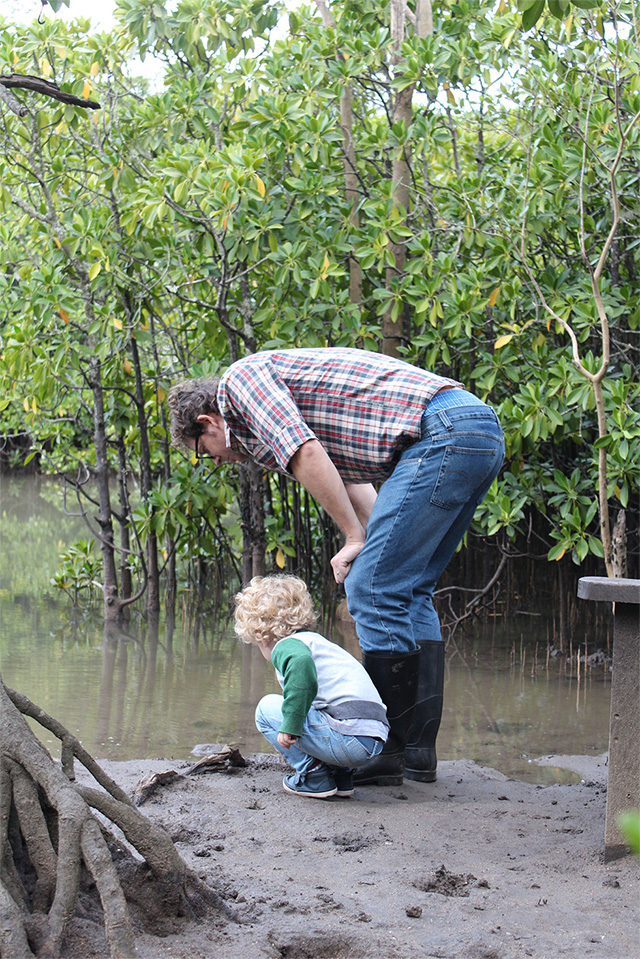 ABOVE: Exploring the mangroves with Christian. Photo by mom. 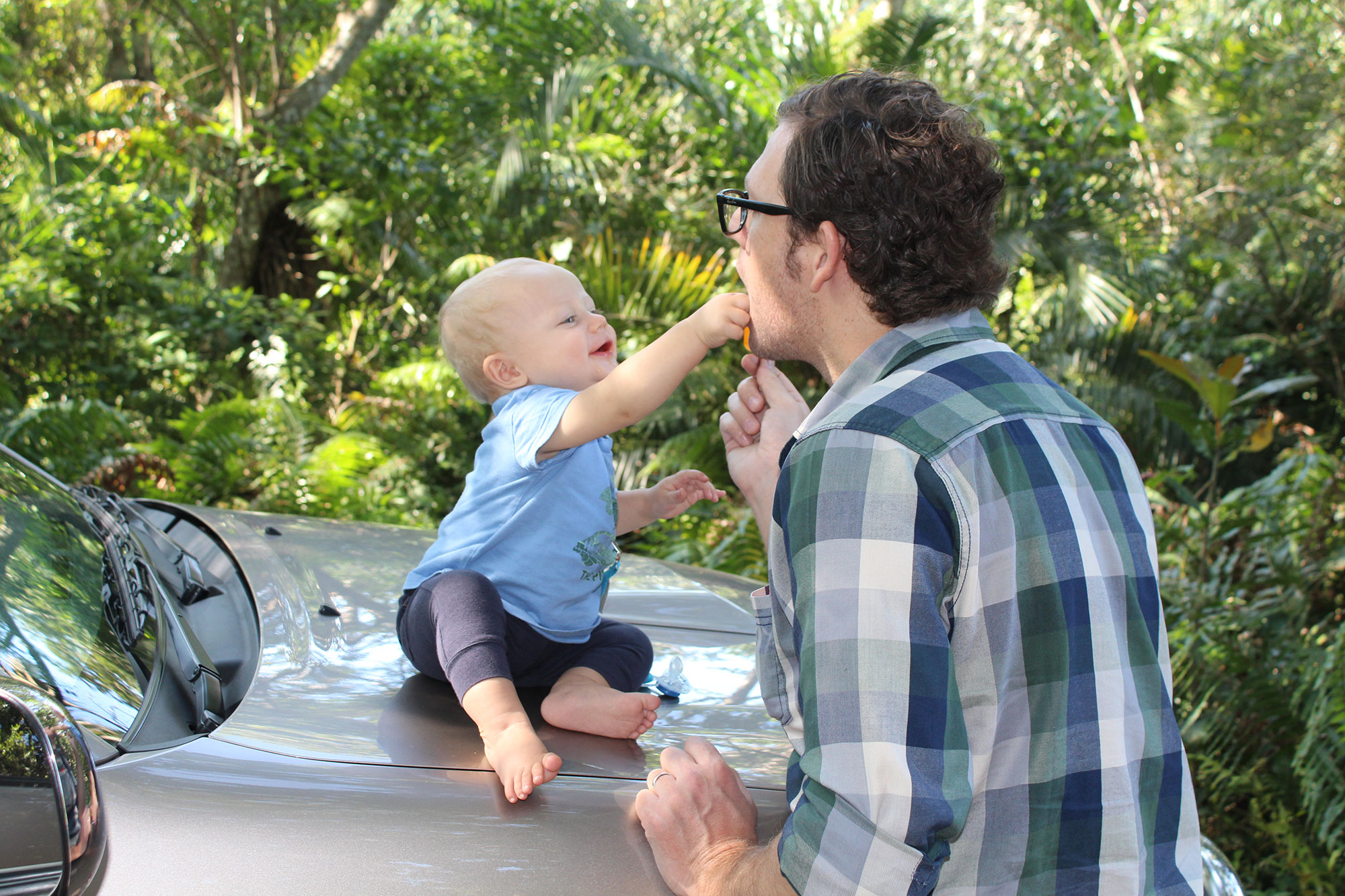 ABOVE: Tip to parents: car bonnets make an inescapable perch for babies at a convenient height. Photo by Ronel Peacock. 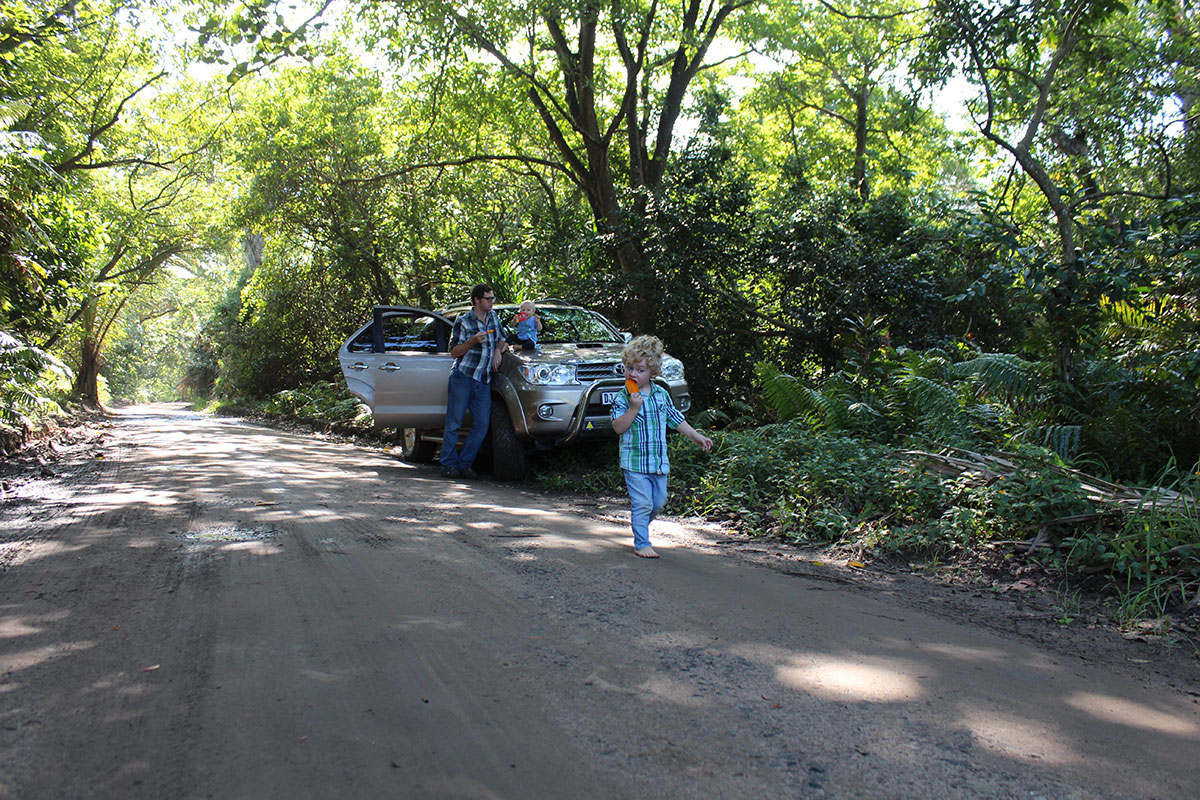 ABOVE: Where can you stop to have an ice-cream in a patch of pristine swamp forest within walking distance of the local supermarket? Mtunzini, that’s where! 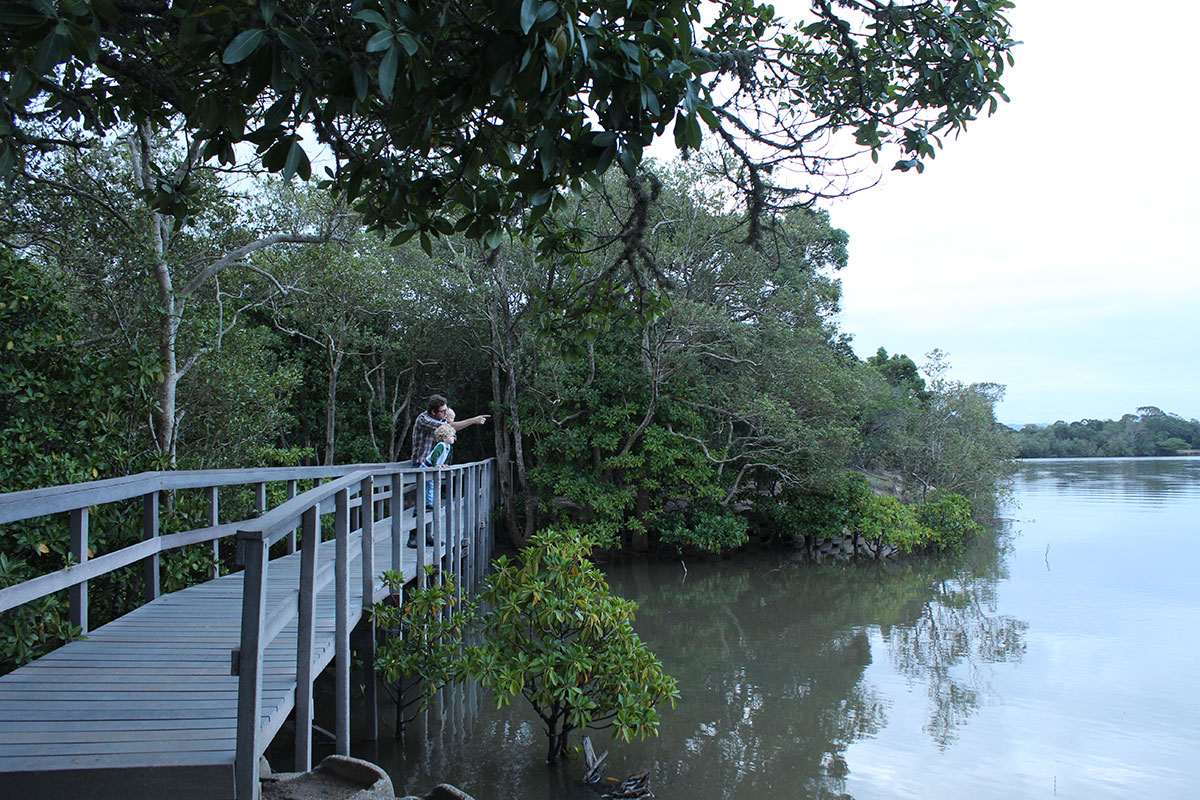 ABOVE: The kids really enjoyed the mangrove boardwalk trail along the Umlalazi River. Photo by Ronel Peacock.