RECOMMENDATION: This blog post is a lot more entertaining if you pump some AC/DC in the background! You can find it here: Back in Black.

In mid April 2017, Lieben Swanevelder found himself staring at a rather odd raptor. The bird was cooling off in a small puddle in the road in Etosha National Park, Namibia. Realizing that this might be something worth documenting, Lieben grabbed his camera and fired off a couple of shots (which came out beautifully, I might add). But he was left in the dark regarding this dark raptor. Some Facebook arguments, confused emails and off-the-record phone calls between various experts later, the pics found their way onto my site and we think we have come up with an ID. Turns out his photos are indeed something special – one of the very few times that a melanistic morph Ovambo Sparrowhawk, Accipiter ovampensis, has been photographed! Thanks for sharing Lieben!

Back in May 2015, in one of my first blog posts, I did some research on melanism in raptors for a write-up of a Lanner Falcon that had made a meal of an unfortunate melanistic Gabar Goshawk. You can read the whole story and see Aden Gower’s pictures here: Grey is the new Black. I hope you’ll forgive me for plagiarizing myself and repeating some of that research below.

Polymorphism (multiple forms) is widespread in birds, occurring in at least 3.5% of all bird species. It is especially prevalent in raptors of the family Accipitridae, in which 22% of species occur in more than one morph. Just think of all the variations of e.g. Tawny Eagle, Wahlberg’s Eagle, Ayres’s Hawk Eagle, Booted Eagle, European Honey Buzzard and Common (Steppe) Buzzard. It is not common in Falconidae, but even in that family there are a few notable examples, such as the rare dark morph of Eleonora’s Falcon. The phenomenon is by no means restricted to birds. Melanistic jaguars, canids, tamarins, antelopes, camels, seals, squirrels, rodents, owls, penguins, vipers, lizards…the list goes on.

Thanks for the science lesson Faansie, but can we get back to identifying Ovambo Sparrowhawks please? 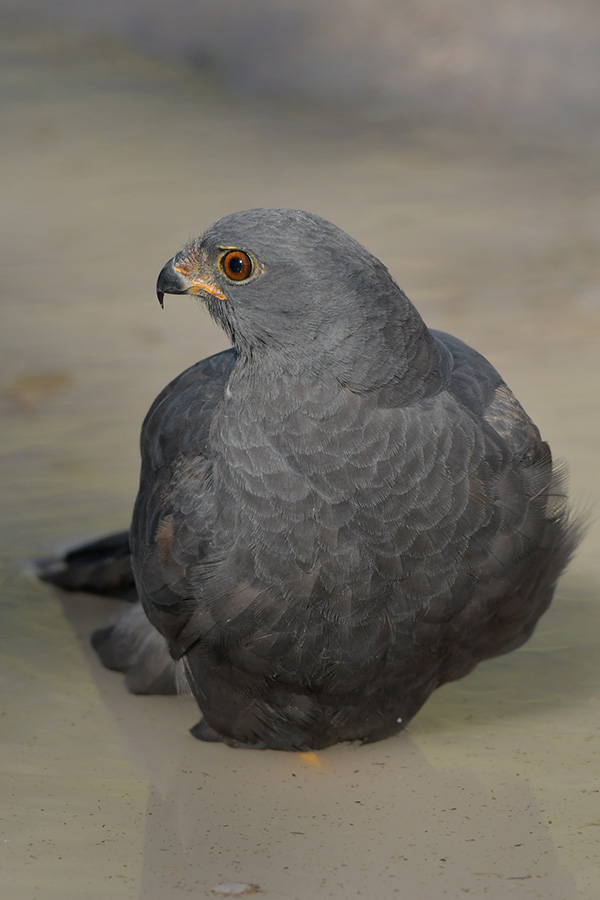 ABOVE: Ovambo Sparrowhawks have vinaceous red eyes, which typically look dark brown or blackish from afar. Note the small head and fairly obvious orange-yellow orbital ring around the eye. This individual is not pitch-black, but rather a dark sooty charcoal colour. In a normal Ovambo, the underparts would be barred right up tot he chin. Photo by Lieben Swanevelder.

It turns out melanistic Ovambo Sparrowhawks only account for 1-2% of the population. The only other photo that I could locate online was from Per Holmen, and guess what? Also from Etosha, in February 2012. Could it be that there is a localised population there in which melanism is more prevalent? n=2 is probably too small a sample size to come to such a conclusion, but it is definitely worth looking out for melanistic Ovambos up there. But black Gabar Goshawks are far more common. Data from southern Africa suggests dark morphs represent approximately 10% in Namibia, 15% in Zimbabwe, 11% in the South African bushveld, 7% in Kruger National Park and up to 25% in Swaziland.

So how do we know this is an Ovambo and not a Gabar? In a word, shape. Experienced birders know that shape, structure and proportions are often far more helpful than colouration, and if the bird lacks the normal colouration, shape becomes essential. There are also some bare part colour differences. Some pointers below, and in the image captions. 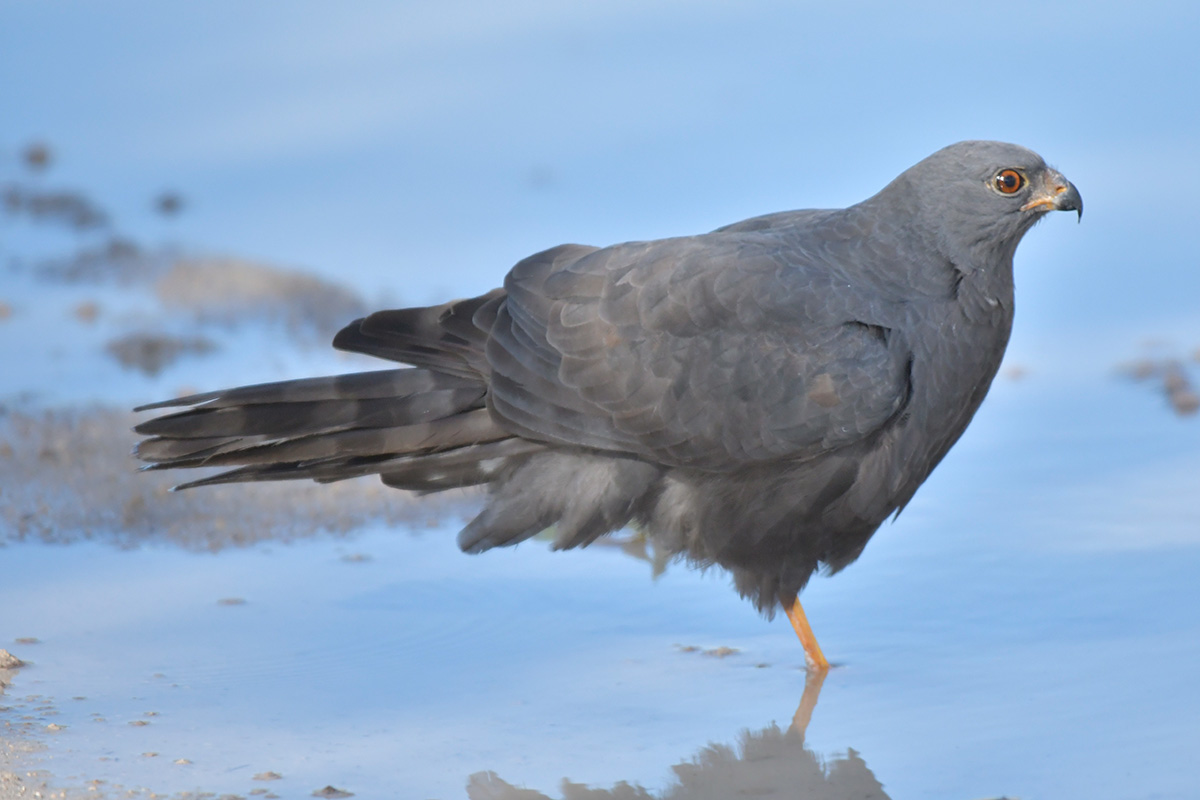 ABOVE: Melanistic Ovambo Sparrowhawk. Again note the proportionately small head. The legs and toes are long and very thin in this species, and tend to be paler orange than Gabars. Also, dark morph Gabars usually have black scales on the front surface of their tarsi. The legs are plain orange in dark Ovambos. Note that the diagnostic white rump/uppertail coverts of grey morph Gabar Goshawk is absent in dark morph birds, so this cannot be used to separate them from dark Ovambos. Photo by Lieben Swanevelder. 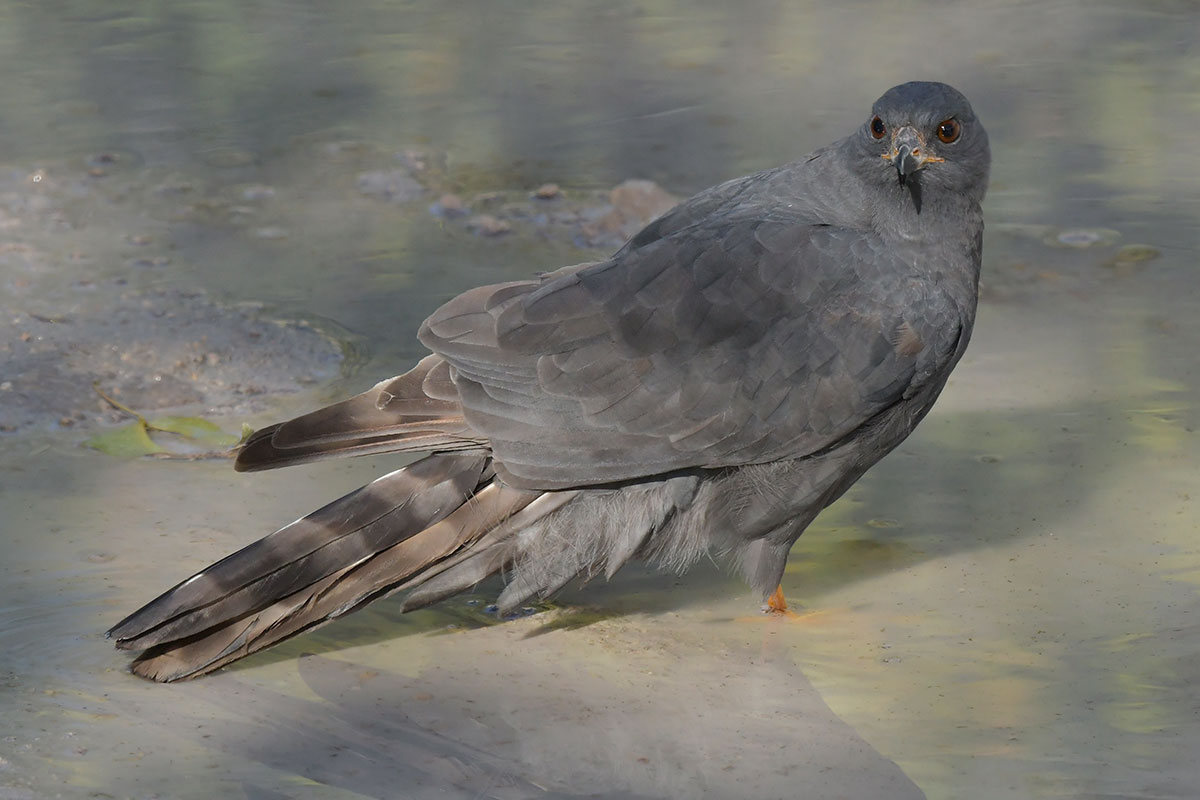 ABOVE: Melanistic Ovambo Sparrowhawk. Do I need to say it again? Tiny head! It almost looks comically small from this angle. This bird seems to be mostly in fresh plumage, but some inner primaries and all but the inner pair of tail feathers are worn – note the definite contrast between the dark innermost tail feathers and the outer ones. While we’re looking at the tail, you can clearly see the white shaft-streaks that are characteristic of Ovambo Sparrowhawk. Photo by Lieben Swanevelder. 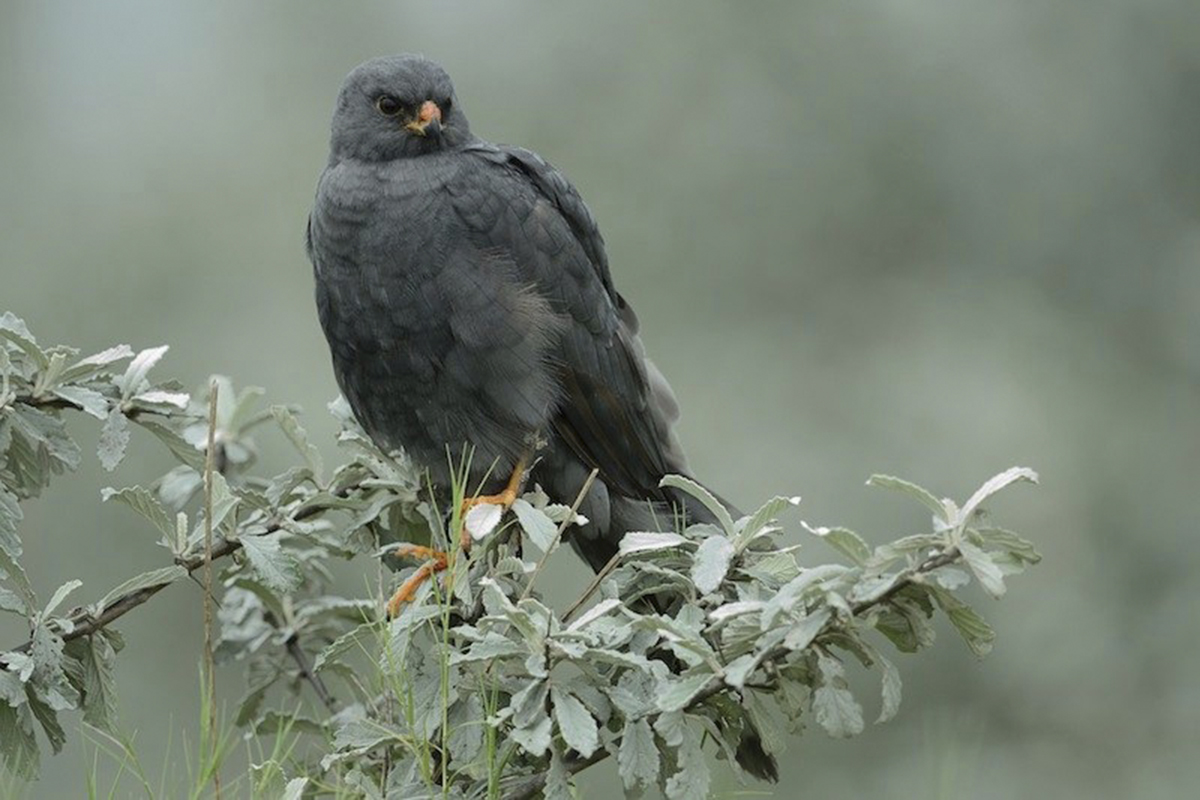 ABOVE: Melanistic Ovambo Sparrowhawk. This is the only other photo of a melanistic Ovambo that I could quickly locate. Taken by Per Holmen on 26 February 2012, also in Etosha. Let’s look at the features again: small head, orange orbital ring, orange cere with bump, very long and slender orange legs and toes and no black scales on front of legs. Could this even be the same bird that Lieben photographed 5 years later? Who knows. It is interesting that Per’s bird is also not pitch black like most Gabar Goshawks, but is a dark charcoal instead. Photo by Per Holmen.

The one obvious question is, shouldn’t this bird be black instead of dark grey? A good question. It is certainly not nearly as black as typical melanistic Gabar Goshawks. Indeed, on some of the more heavily exposed photos it looks almost “normal” grey. Nevertheless, it still lacks any barring below. I suspect that things are not always so black-and-white when it comes to colour aberrations. Dark plumage in birds is controlled by the melanocortin-1 receptor gene (MC1R); this little section of the genome codes for a specific amino acid, which results in the expression of melanocytes; thus increased activation of MC1R results in the synthesis of more dark-coloured eumelanin. But many birds show a range of colour morphs with different degrees of eumelanin and yellowish or reddish phaeomelanin. Think Tawny Eagle, Wahlberg’s Eagle and Steppe Buzzard for example, or jaegers and skuas for that matter. Perhaps this is a melanistic bird, but with a lower degree of melanism.

Then again, how much do we really know about this rare mutation in Ovambo Sparrowhawks? Perhaps this charcoal colour is the rule rather than the exception? If you have any thoughts or comments, I would love to hear them! 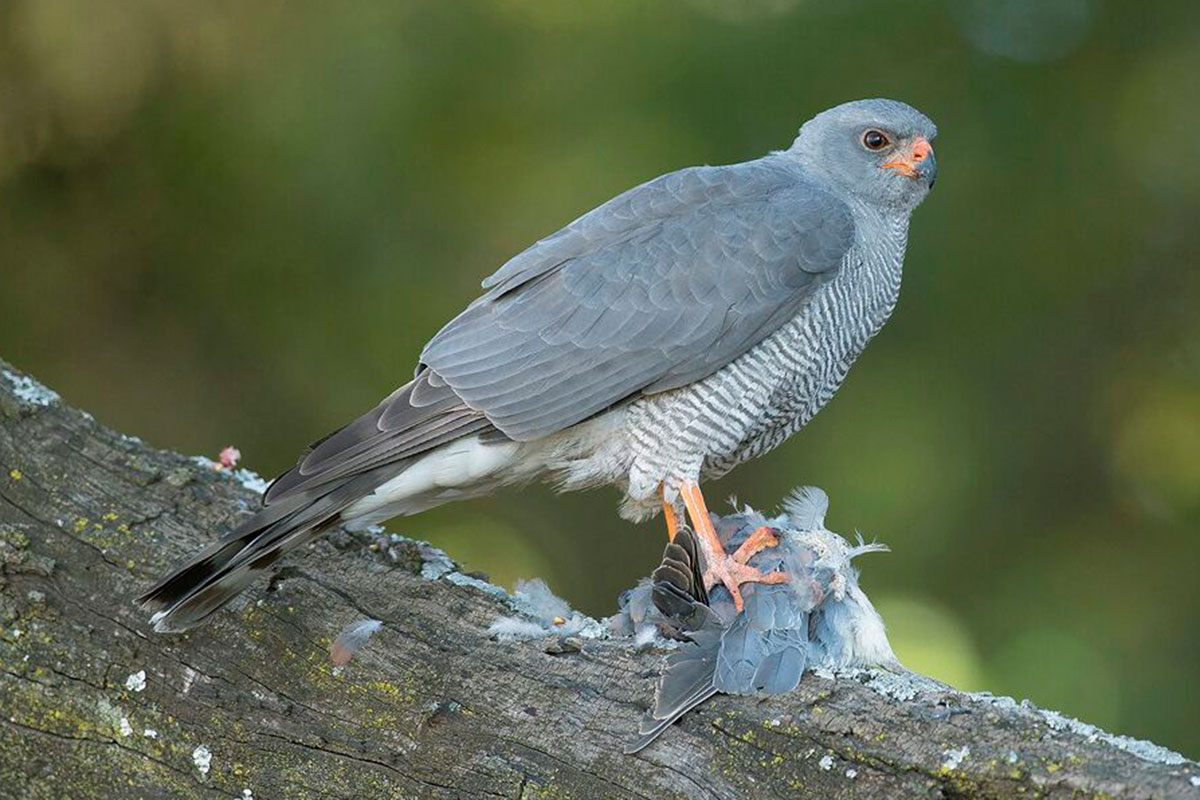 ABOVE: Normal grey morph Ovambo Sparrowhawk, snacking on a dove. Looking only at the head, upperside, wings and tail, this bird is very similar to the Etosha dark morphs shown above, and really only a shade lighter grey. However, the dark morphs obviously lack the barring on the underparts. Photo by raptor-fundi Niel Cillié. 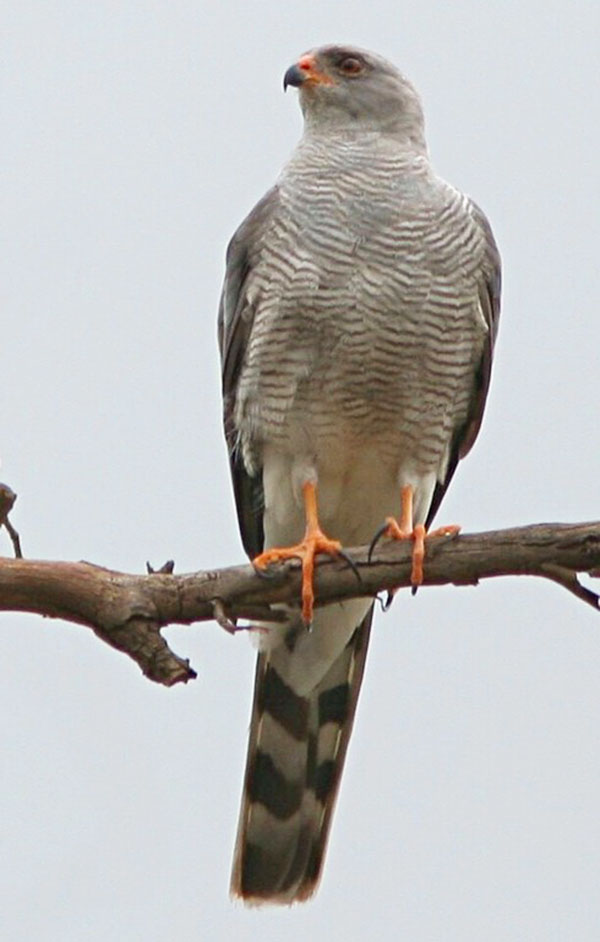 ABOVE: Ovambo Sparrowhawk. Check out those long, thin legs and toes, and how about those claws? Pretty scare if you’re a mid-sized woodland bird. You can see the typical white shaft-streaks on the pale bars of the tail feathers. Photo by Phil Penlington. 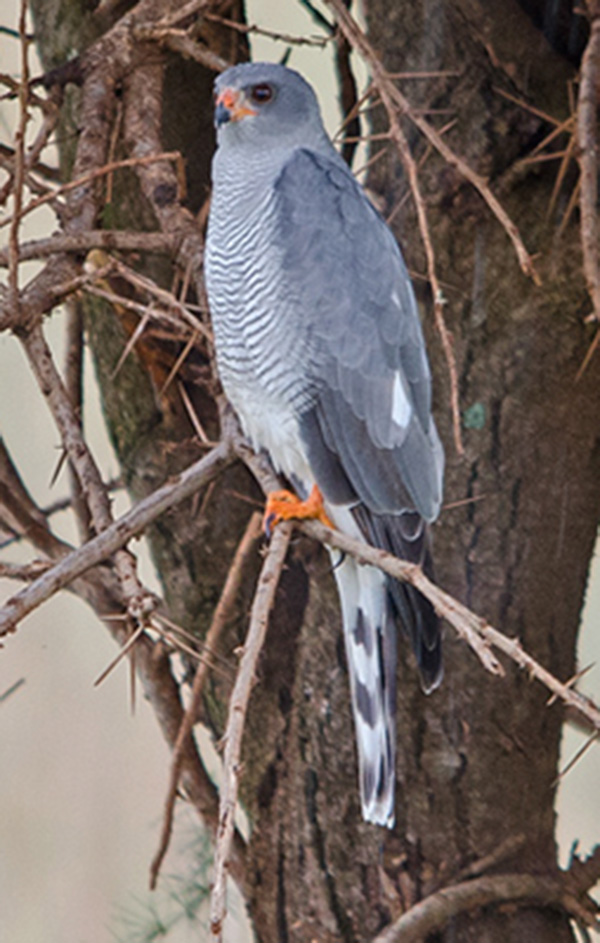 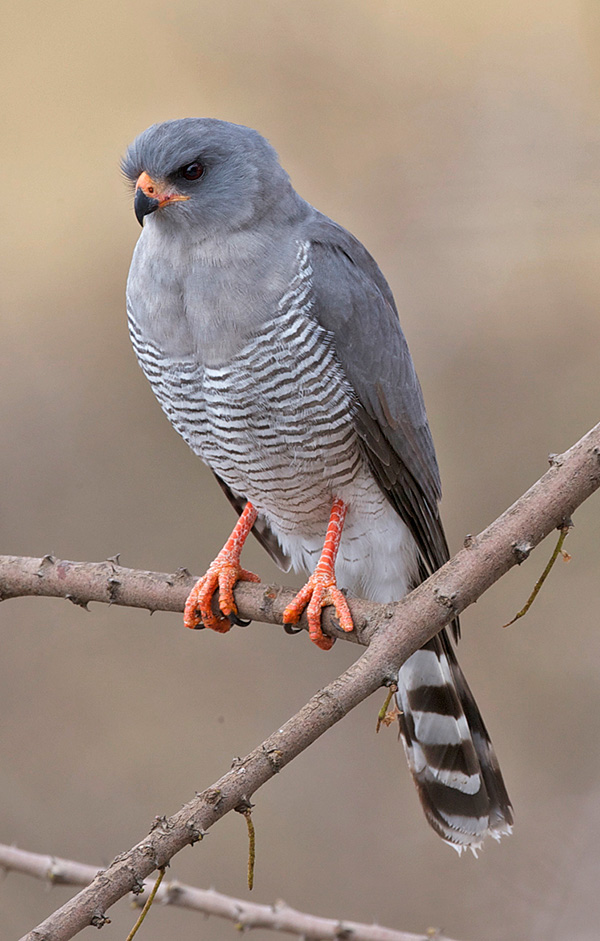 ABOVE: Gabar Goshawk: compared to Ovambo, Gabar has a bigger head, dark mask, redder legs and cere, shorter and thicker legs and toes, and a grey not barred throat. It is a smaller, more stocky bird, and is more closely related to the chanting goshawks. Photo by Kip Lee / Wikimedia Commons. 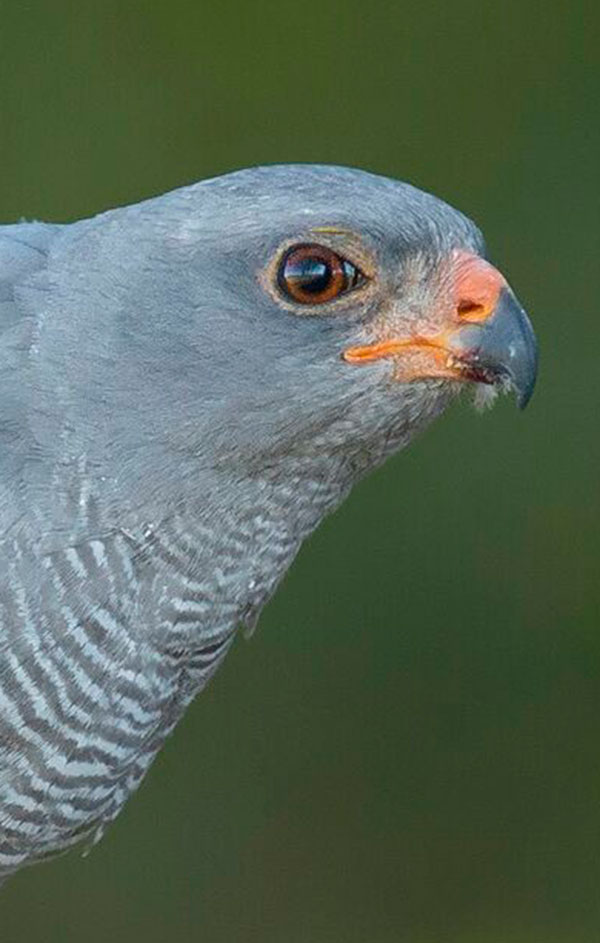 ABOVE: This gorgeous close-up photo of an Ovambo Sparrowhawk shows another distinguising feature that points to the dark bird being an Ovambo and not a Gabar: the shape of the nostril. In Ovambo the nostril is a flat, horizontal oval without a nasal ‘peg’. Also note the bump atop the cere. Photo by Niel Cillié. 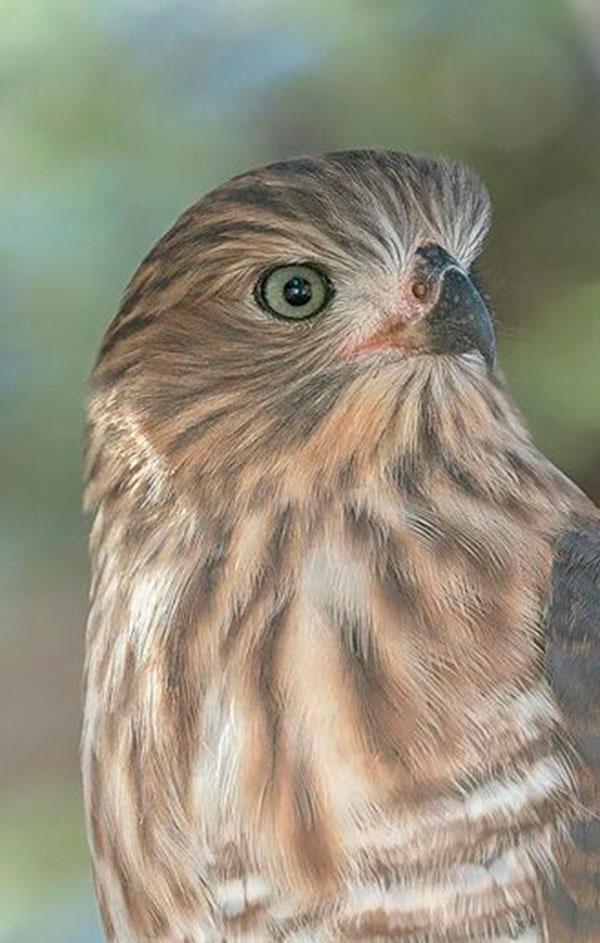 ABOVE: Another ridiculous shot by Niel, this time of a young Gabar. Niel pointed out to me that the nostril is a smaller, more rounded hole, and if you look closely there is a small ‘peg’ in the middle of the nostril. Young Gabars have pale yellowish-green eyes that will turn dark red with age. Photo by Niel Cillié. 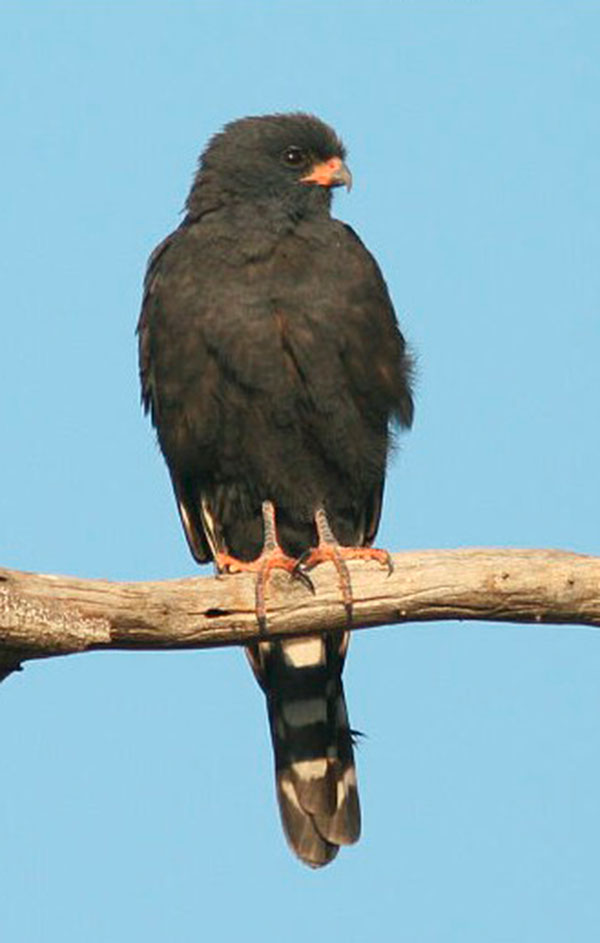 ABOVE: A typical black form (melanistic) Gabar Goshawk. Note the black scales on the front of the legs. Compared to the dark Ovambo featured in this article, the legs and cere are redder, there is no pale orbital ring, and the plumage is considerably darker. Photo by Kevin Ravno. 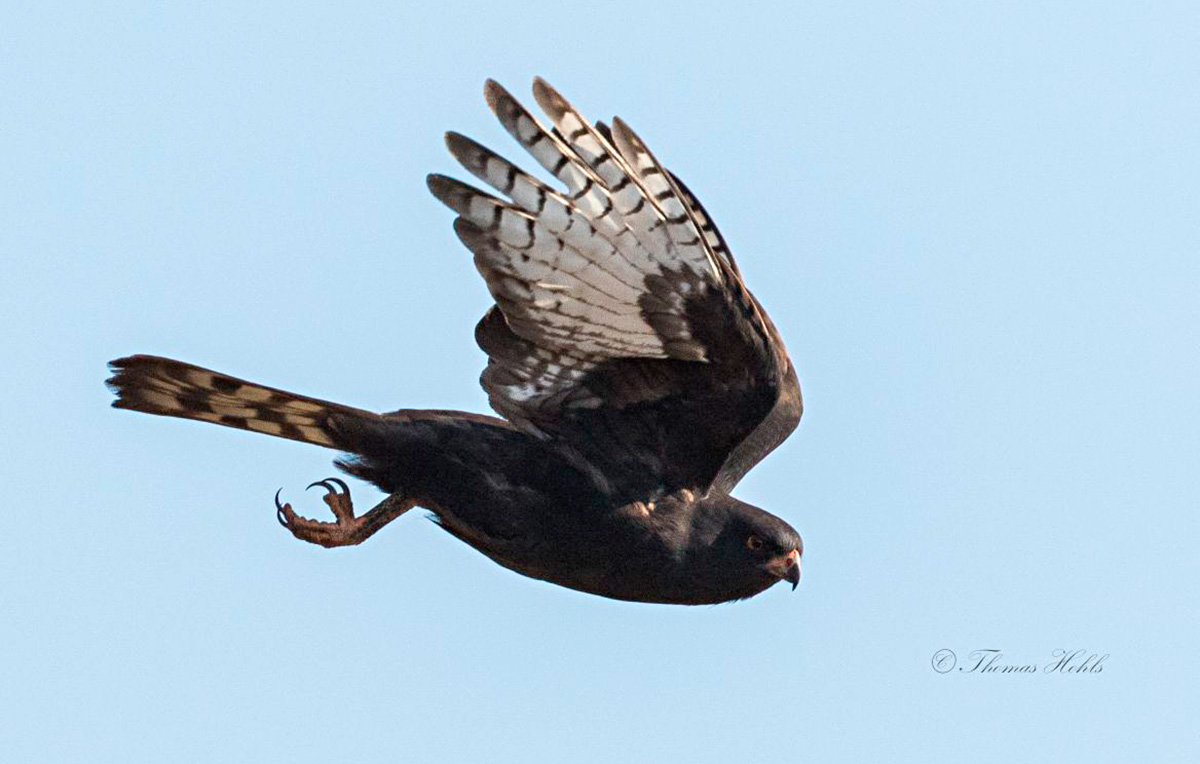 ABOVE: A melanistic Gabar Goshawk in flight. In addition to the structural differences already mentioned, black Gabars differ from Ovambos in the large white window that is visible at the base of primaries. This area is barred throughout in Ovambo. Note that dark form Gabars don’t have the white rump that instantly identifies the normal form of this species. Photo by Thomas Hohls.