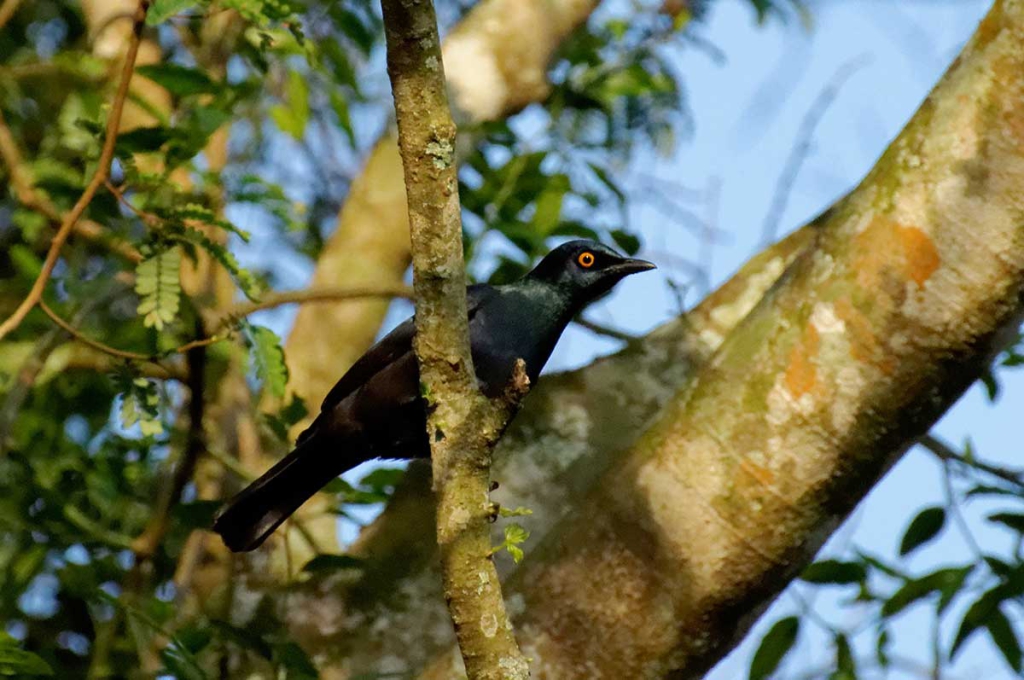 ABOVE: Like other glossy starlings and birds with iridescent plumage in general, the colours and hues of Black-bellied Starlings change considerably depending on the the angle of the light. In the canopy they often appear overall black, but in strong light they look brilliantly colourful. At times they can also look remarkably dull. Finally, their plumage changes colour if their feathers get wet. Photo by Thomas Hohls.

As far as starlings go, the Black-bellied version is pretty cool. These forest-dwelling birds are restricted to forests and mature woodland along Africa’s east coast, from Somalia southwards as far as the Garden Route in South Africa. Most starlings are omnivores, but Black-bellied’s are primarily frugivores. Not surprisingly, they spend most of their time up in the canopy and are much less often seen on the ground than typical glossy starlings. That is not to say they won’t east animal food, including flying ants, winged termites, small snails, small lizards and geckos and even Hyperolius reed frogs. They do occasionally forage on the ground, but will also take flying insects on the wing. Lastly, they have a soft spot for nectar, like many other woodland birds.

Black-bellied Starlings differ from typical Lamprotornis glossy starlings in several regards – so much so that they are sometimes placed in a different genus, namely Notopholia. Their specific name may also be spelled slightly differently, so be warned that Lamprotornis corruscus and Notopholia corrusca (as in the latest IOC list; see www.worldbirdnames.org) both refer to the same species. The common name hints at the fact their bellies lack iridescence, and characteristically, are a dull matt black.

Something truly weird about the species is that the eyes of males turn from orange-yellow to red in the breeding season. In addition, when agitated their iris colour can change to red in a matter of seconds, giving a whole new meaning to ‘giving someone the evil eye’. This is presumably because of increased blood flow to the iris, and may play a role in social contexts. Eye changes have been observed in birds caught in mist nets as well. Bizarrely, one observer described the colour change affecting only one of the two eyes. Normal colour is apparently restored abruptly after ten minutes according to Feare and Craig’s Starlings and Mynas.

when agitated their iris colour can change from yellow to red in a matter of seconds, giving a whole new meaning to ‘giving someone the evil eye’

But this post is specifically about the vocalisations of Black-bellied Starlings. They are undoubtedly vociferous birds, but whether their babbling sounds can be described as pleasant is debatable. They are also sociable birds, especially in the non-breeding season, when flocks of up to 400 birds have been reported. The Such groups can be quite loud, and this species is often one of the dominant contributors to the bird chorus in coastal forest habitats, with groups keeping up a nearly constant chattering throughout the day. To my ears they sound quite similar to the co-occurring Square-tailed Drongo Dicrurus ludwigii (which they apparently mimic as well!). The call of the latter was animatedly but quite accurately described by a friend of mine as “a metallic mess”, which could also apply to the Black-bellied Starling.

But what fascinates me the most, is the remarkable talent of Black-bellied Starlings to imitate the calls of other species. Vocal mimicry in itself is by no means unusual in birds. To partly plagiarize a paper I wrote on the subject some time ago (which you can download from the Ornithological Observations journal site here: Mimicry in Tit-babblers)…the copying of the songs or calls of other species, or mechanical sounds, is a very widespread and has been reported in 66 species of southern African passerines, from 34 genera in 17 families. Groups such as robin-chats, larks, chats and some warblers are celebrated for their ability to copy other species, while less familiar imitators include sunbirds, canaries, white-eyes, nicators, shrikes and bush-shrikes. In the starling family, mynas are well-known for their entertaining ability to copy human speech. I have a video somewhere of a caged one imitating someone laughing (and a camera shutter).

No one is really sure why birds copy other birds, but my opinion is based on what I call the ‘teenager theory’. If you, as a teenager, want to one up your peeps and hit some strange, what would be the most wicked way to do that, yo? You don’t necessarily have to sculpt your abs, or become a super-jock (and as a skinny, geeky guy those weren’t really options for me). That is totes the hard way, and after all, YOLO. If you want to hook up with a GF, and at the same time outcompete your frenemies, the much more chillaxing way is to do it vocally. Talk the talk, gansta. And the easiest way to confirm your, like, badassery, is to just copy all the tope slang phrases you hear around you, obvs. You could, like, invent your own slang, but that would be cray cray hard work. Just copying stuff is much easier, and will give you mad swag. Hashtag ‘sharing is scaring’.

That is totes the hard way, and after all, YOLO

In much the same way, birds can copy short snippets of elements that they hear in the environment around them, and recompose them into novel phrases. So in scientific speak, vocal imitation probably serves to diversify a bird’s song in order to increase repertoire size for territorial and sexual competition. The result does not hold any direct adaptive advantage for the imitator to be recognised by or resemble the imitated. As an example, Chorister Robin Cossypha dichroa do not only imitate other birds, but also dogs, humans, frogs, locomotives and car alarms. In other words, virtually any sounds they hear around them. And this explains my obscure ‘sharing is scaring’ heading. By copying other birds, which are in effect sharing their sounds with the starlings, the starling males are expanding their vocal repertoires and scaring off rival males by having ‘sexier songs’.

But like a flock of Black-bellied Starlings, I’m rambling. On 10 August 2015 I found myself sitting under a fruiting fig tree in Hazyview, Mpumalanga, South Africa. This tree was like an island in an ocean of banana plants – which, to a frugivore like a Black-bellied Starling would be very inviting if they weren’t all covered by blue plastic bags. I became aware that the Black-bellied Starlings were doing some redonkulous mimicry, and I started jotting down some of the imitations that I recognised. You can listen to a 22 s clip of one starling singing below.

The results? In 10 minutes, I could pick out imitations of 28 other bird species! What’s more, is that these were all identified by ear on the spot, so I’m sure that I missed at least 30-40% of the total number of species the birds imitated. Unfortunately I couldn’t see the singer(s) very well in the canopy, so I can’t be sure if all the imitations were performed by a single male, of if there were more birds present.

Eventually it dawned on me that I should probably try and record some of this mimicry, so I grabbed a camcorder and tried to make a video. In between a newborn and a busy little toddler, I managed to take a shaky 22 second clip, which you can listen to above. Identifying mimicry is quite difficult because the imitations are usually only a split-second long, and randomly mixed without repetition. Therefore, I made an attempt to separate them and point them out one by one in the clip below. If you can stand my Afrikaans accent, the clip below will be a good test of your skill in identifying our local bird sounds. In particular, the last seven seconds are incredibly rich in mimicry – the starling copied 9 other birds in 7 seconds, i.e. a new species every 0.7 seconds. Identifying bird sound from fragments of less than a second is a tricky business – maybe you disagree with some of my IDs – let me know in the comments!

Below is a list of the birds that were imitated. What does such a list tell us? Firstly, I think it is actually a convenient, and probably quite accurate, list of species that occur within the immediate vicinity. Indeed, in the course of the next two days I saw most of these birds on the property. Secondly, mimicry of Fiery-necked Nightjar suggests that the starlings also learn sounds at night, while they are roosting. It’s also interesting to compare my list to a similar list that Pakenham compiled in 1963 from the island of Zanzibar. Of the 9 species he listed, 5 overlap with my analysis. You’ll see the annotation ‘Brownbul/Greenbul’ below – I wasn’t quite sure whether I was hearing mimicry of Terrestrial Brownbul or Yellow-bellied Greenbul, as some notes of these two species can be very similar. Under Cape White-eye and Dark-capped Bulbul, the word ‘multiple’ implies that the starlings copied several different sets of sounds from these species. Numbers 29-34 were additional species I identified from the audio sample above.

List of species imitated by Black-bellied Starlings at Hazyview: