In 1942 Ernst Mayr defined the Biological Species Concept, which quickly gained nearly universal acceptance (to the point that it even has its own abbreviation: BSC). This was in part due to its convenient simplicity in defining a species. Essentially, reproductive isolation is the BSC’s critical criterion: ‘species are groups of actually (or potentially) interbreeding populations that are reproductively isolated in nature from other such groups’. Essentially this means that if two taxa hybridize, they are not different species.

Sounds simple enough, but nature is seldom so straightforward. How common is hybridization really? One of the main problems with the BSC is that hybridization is actually far more common than one might think. Some estimates suggest that at least 9% of all bird species have interbred in the wild! A case-in-point is this apparent hybrid between a Great Sparrow (Passer motitensis) and a Cape Sparrow (P. melanurus) that Ursula Franke-Bryson ringed in Namibia. I hope that this short guest blog from Ursula will entice birders to keep an eye open for the unusual – even with birds as everyday as sparrows!

By the way, the plates above are from my book, Chamberlain’s LBJs. 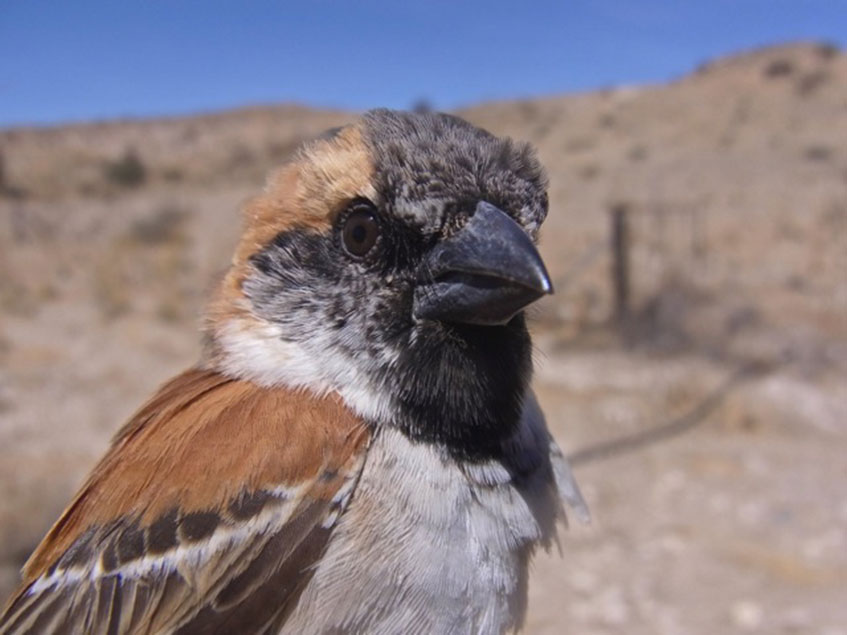 ABOVE: The hybrid Cape X Great Sparrow ringed at Sphinxblick, Namibia. All photos by Ursula Franke-Bryson, unless indicated otherwise.

.
In December 2014 we caught a rather unusual male sparrow while ringing birds on the farm Sphinxblick in Namibia at 22°24’S 15°30’E. This bird showed a mix of features of both Cape Sparrow and Great Sparrow. It had a dark grey crown (black in Cape Sparrow), which was framed on both sides by pale rufous sides to the neck (In Great Sparrow these areas are darker, while they are white in Cape Sparrow). Furthermore, the bird had grey cheeks with black spots, which should have been white if it were a Great Sparrow, and black in the case of Cape Sparrow. Its strong black throat patch resembled that of a Great Sparrow, and it lacked the black breast band of a typical male Cape Sparrow. The upper mantle showed some dark streaking, which is prominent in Great and absent in Cape Sparrow (see images below). The bird was aged as an adult mainly by the fully developed white fringes of the greater wing coverts and the bill which is black all year in Great and turns black in Cape Sparrow for the breeding season (Hockey et al. 2005; Peacock 2012, p. 268 – 271). 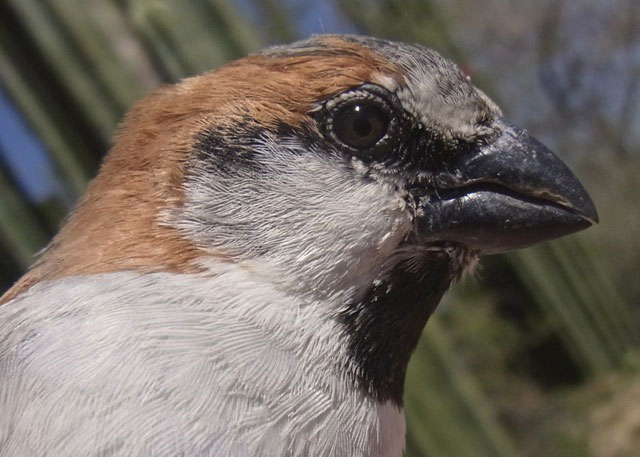 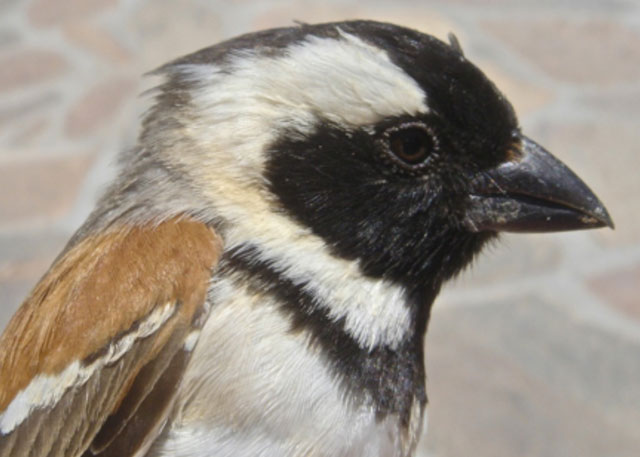 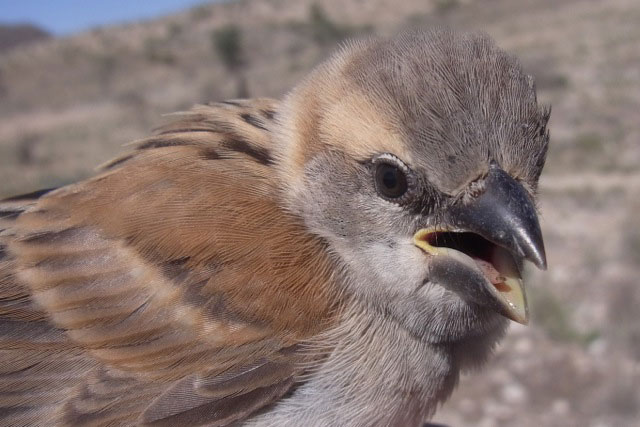 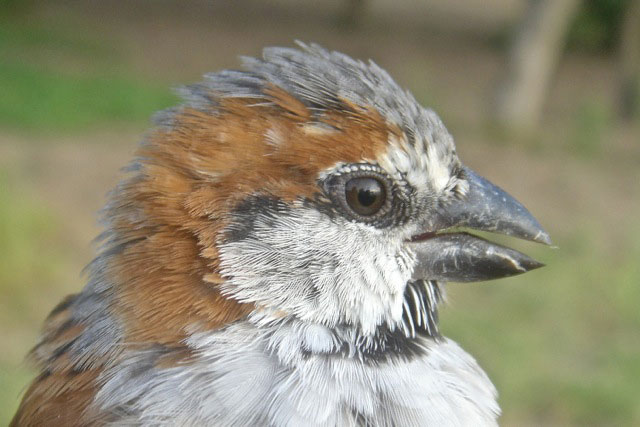 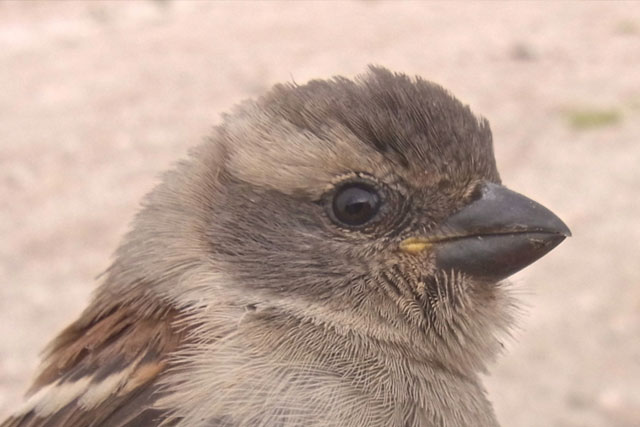 ABOVE: Young Cape Sparrow with yellow gape. In juveniles of both sexes the mask is initially uniform grey. This may well be a young female. 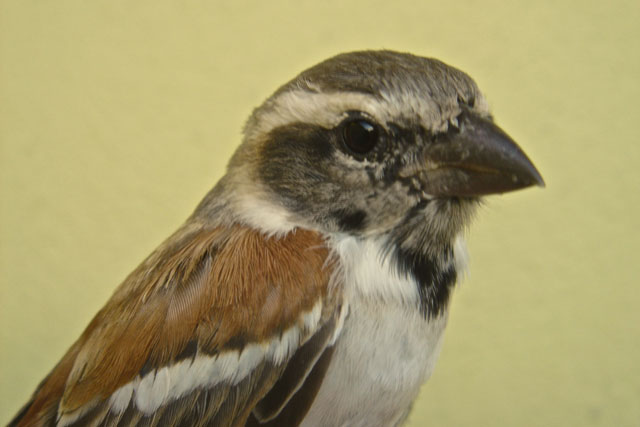 ABOVE: Young Cape Sparrow with first signs of black face mask (indicating a male) and grey throat, a small bib and gape flanges… 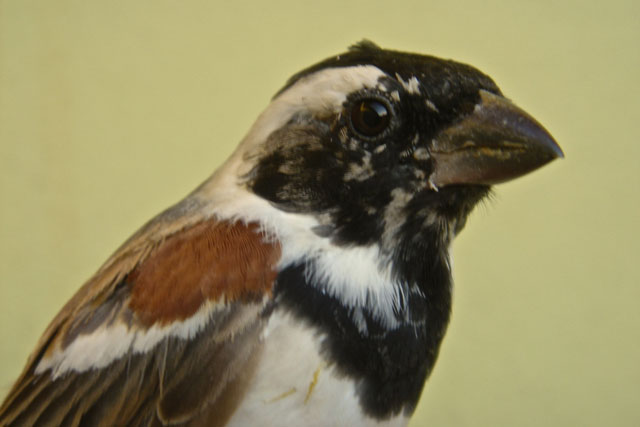 ABOVE: …and a further moulted Cape Sparrow male with a fully developed black breast band and some fresh coverts… 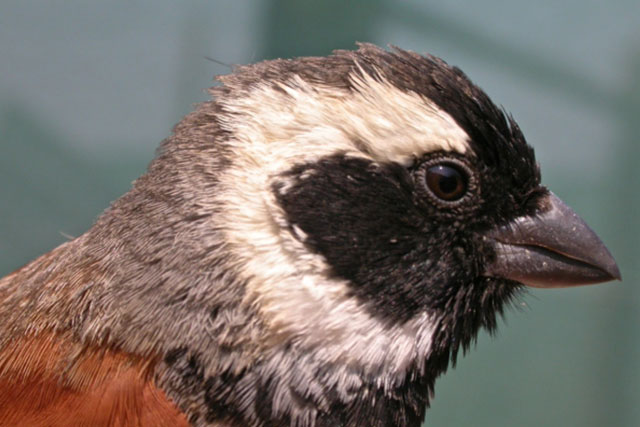 ABOVE: …and finally in full adult plumage.

The bird’s measurements, roughly speaking, showed the presumed hybrid to lie at the upper edge of Cape Sparrow range, and in the lower third of the Great Sparrow size scale (see table below). To gather more information for the identification, we also compared the phenomenology of the hybrid bird with young Great Sparrows and young Cape Sparrows. Juvenile Great Sparrows are similar to adults of respective sex, but paler (Clement et al. 1993:454).
.

ABOVE: Comparison of measurements of male, fully grown Great and Cape Sparrows, taken in the area of our bird ringing activities.

The bottom line? Hybridization in sparrows is probably more common than you think

Interesting but mostly unconfirmed reports suggest that the House Sparrow’s list of sex partners may include several species outside of the sparrow family. Somewhat dubious reports claim that it may hybridize with finches and canaries (Fringillidae) such as the Chaffinch Fringilla coelebs, Domestic Canary Serinus canaria (var. domesticus) and European Greenfinch Chloris chloris. Furthermore, hybrids with the Estrildidae, like the Java Sparrow Lonchura oryzivora, are suspected; ditto for the buntings and New World sparrows (Emberizidae) like Chipping Sparrow Spizella passerina. Such unusual pairings are highly unlikely in nature, and probably happen only in artificial situations in aviculture (Avibase; McCarthy 2006).

Hybrids of the common Cape Sparrow are documented: with the House Sparrow (Summers-Smith 2009a in del Hoyo et al., p. 800), and in captivity with the Grey-headed Sparrow Passer griseus and the Sudan Golden Sparrow (McCarthy 2006, p. 269-270). A literature search and scouring of the Internet revealed only one documented record (Fraser et al. 1992) and a few photos of an apparent hybrid (LINK HERE). However, in the non-scientific literature I found the statement that ‘the two species freely and naturally hybridize in many areas of South Africa and Namibia’ (Carnaby 2008, p. 193, no further references given).

Is this just the tip of the iceberg?

Some of the sparrow species are very similiar by systematical and phenomenological criteria and hybrids with their variation of mixed features might be undetected, overlooked or regarded as subspecies. See the example of the Sind Sparrow Passer pyrrhonotus (in Summers-Smith 2009f:795, and in the EOL database), for example. Truth be told, we simply do not know how many sparrow hybrids live unperceived. To the best of my knowledge this is the only documented occurrence of a Passer melanurus x Passer motitensis hybrid.

I thank Dane Paijmans for the fruitful discussion and for editing the text, and Les Underhill for his support. 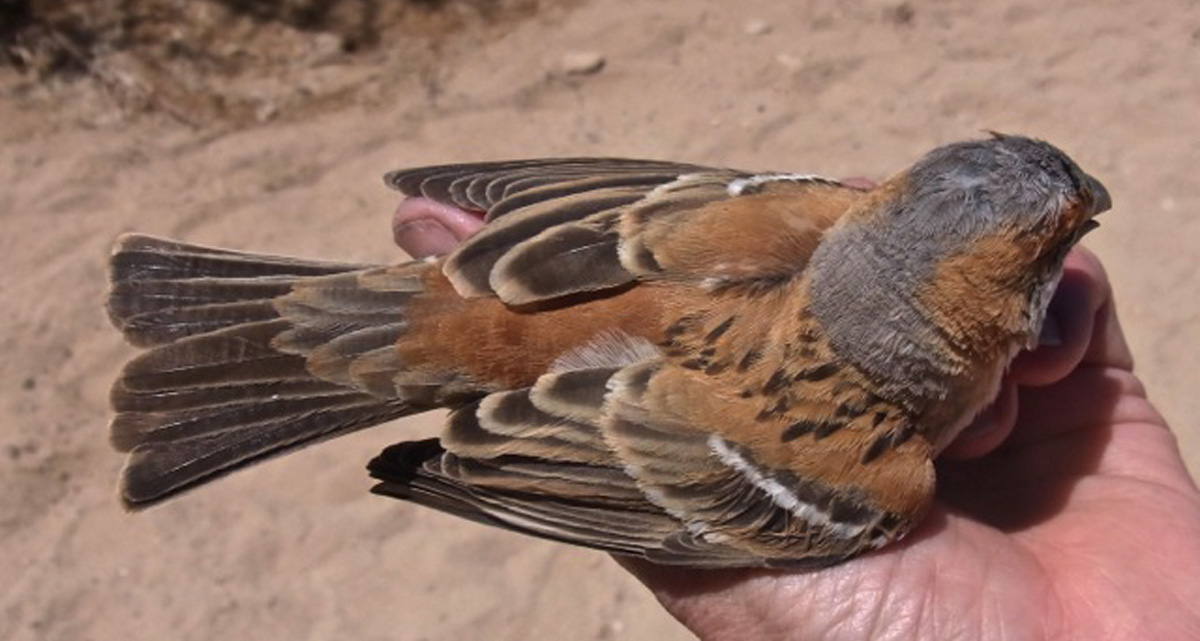 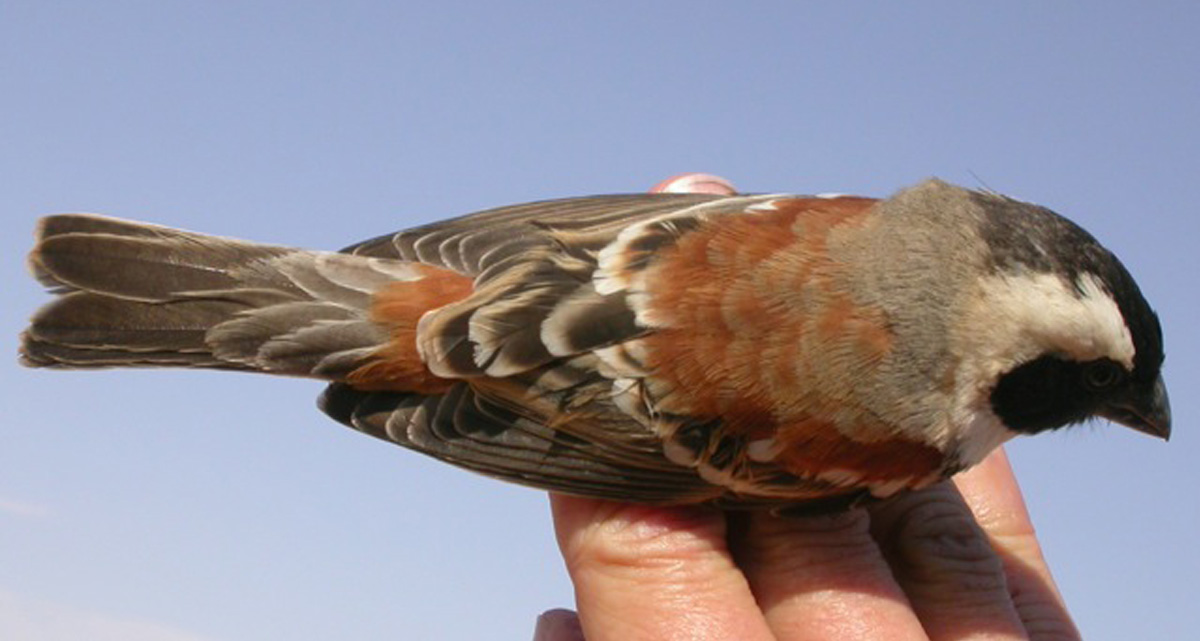 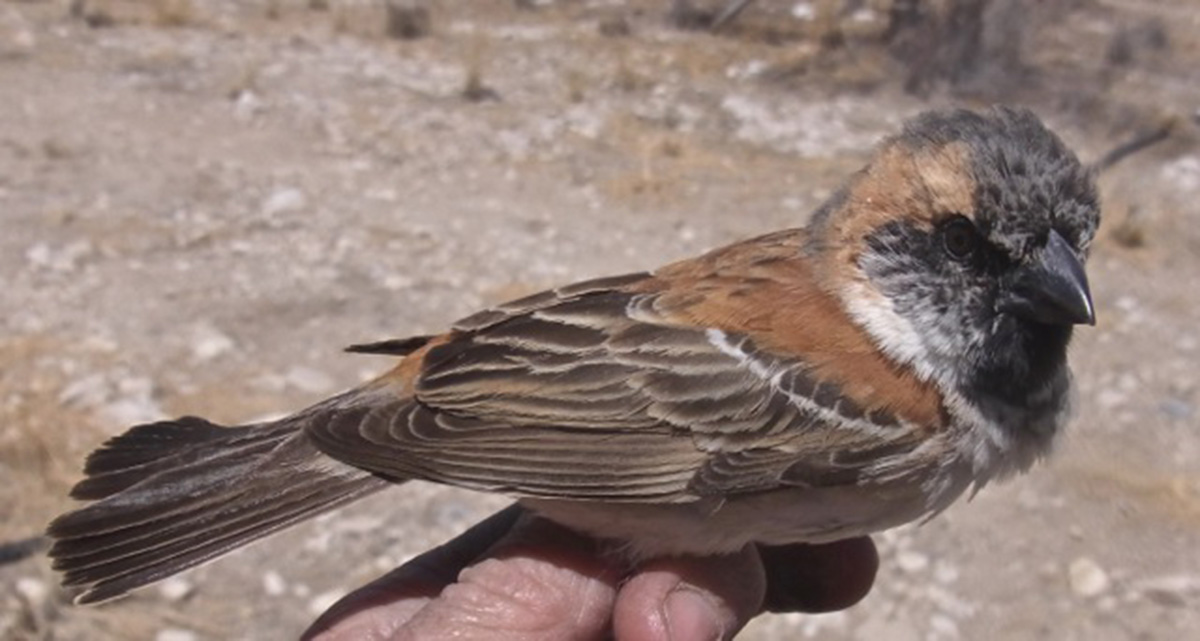 About the Author: Ursula Franke-Bryson

Ursula Franke-Bryson found her passion in ringing birds. Her teachers Steven Piper and Kobie Raijmakers peaked her interest for research into birds' moult strategies. Together with her husband she is collecting data to support research on birds throughout southern Africa. Her 500th species ringed: Bar-winged Weaver.