The Pelagic Nightjar – a species new to science? 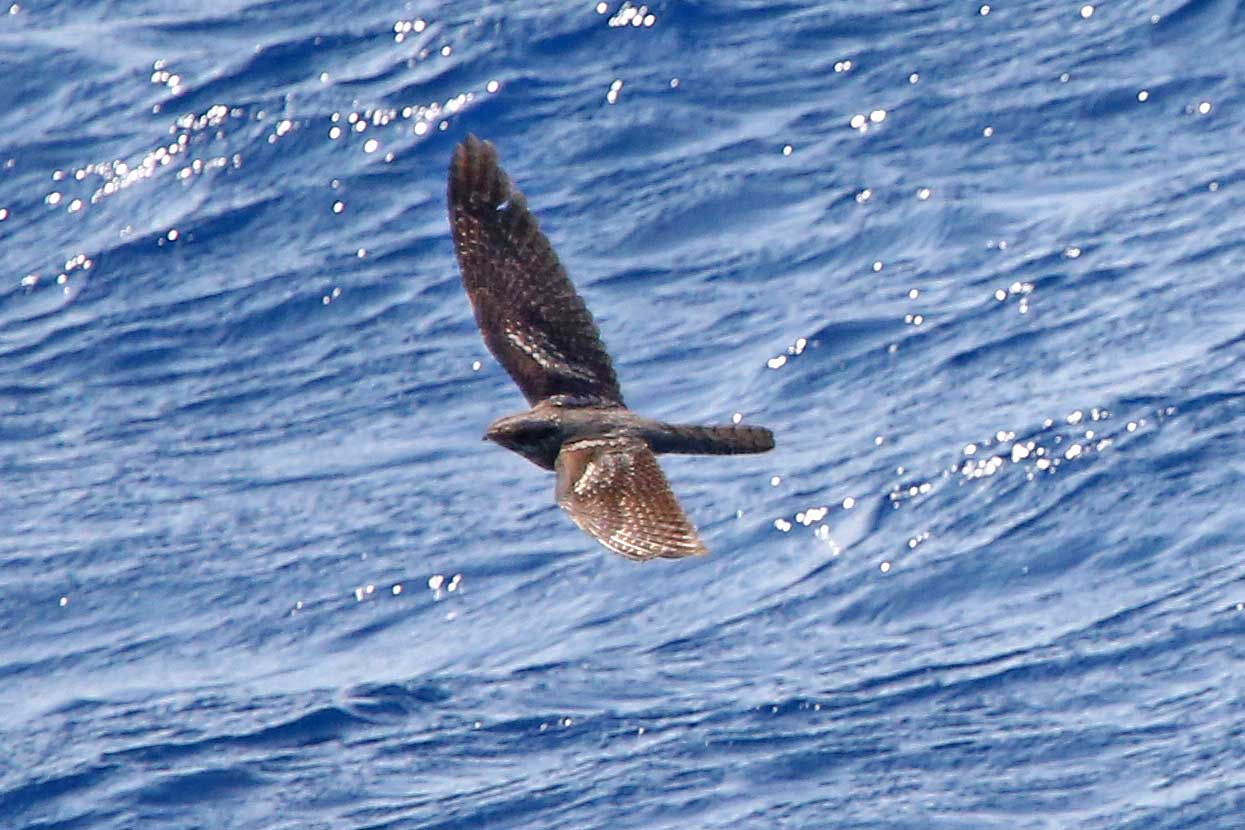 ABOVE: Is this the first photo of a new species, namely the Pelagic Nightjar, here photographed in its natural habitat? Not quite…

The miracle of migration never ceases to amaze me. Sure, I have read all the theory…pre-migratory fattening, departure dates, weather conditions, navigation cues, migratory routes, altitudes, nocturnal vs diurnal migration, satellite-tracking, geolocators etc. etc. But I don’t think anything could prepare my simple, terrestrial, passport-bound human mind for the first time I witnessed migration in the act. It’s a bit like hearing your more experienced adolescent friends recount in detail what it feels like to kiss a girl…and then experiencing it for yourself, for the first time! Perhaps your first-kiss-migration story will involve a passing migrant briefly calling while flying overhead in the dead of night. Or perhaps a million swallows lined up on a telephone wire, chomping at the bit to return to their boreal breeding grounds. Or perhaps a waterbird that somehow turned up at a small ephemeral pan in the desert, only hours after an isolated rainstorm.

My first kiss (so to speak) occurred on the ship MV Madagascar, about 200 km off the coast of Mozambique. Together with about 200 other birders, we were cruising up the Mozambique Channel, with Madagascar at starboard, and Mozambique at port. The trip started pleasantly as we cruised out of Durban Harbour on the afternoon of Monday the 21st of November 2005. However, during the night good ol’ Poseidon decided to demonstrate his power. By dawn the next morning, the assembled birders were definitely fifty shades of green. Cruising expectantly into the gloomy, rainy weather, we were not greeted by some tropical petrel, shearwater, tropicbird or booby, but instead by a little speck that came flying straight towards the boat, only to morph into a juvenile Red-backed Shrike. Then came a species even more out of place in the open ocean: a Willow Warbler! This ‘landfall’ continued throughout the morning, as migrant birds sought refuge from the storm. They often rested on the boat for a while before continuing into the unknown. An Amur Falcon and a juvenile Sooty Falcon both put in an appearance, perhaps on the tail of a Barn Swallow. Many of those onboard even got a terrestrial lifer in the form of an Icterine Warbler. Bigger birds included Ruddy Turnstone and Common Whimbrel. In addition to Palearctic migrants, some intra-African birds also put in an appearance: Cinnamon-breasted Bunting and African Paradise Flycatcher coming to mind. Truly a red letter birding day.

But getting back to Pelagic Nightjar. My friend Dave Deighton (he of the three twitches) found himself aboard the MSC Sinfonia on the afternoon of 23 May 2016. The cruise liner was en route from the Cape to Venice, and the weather in the Mediterranean was sunny with some cloud cover, and a moderate breeze. As Dave has a habit of doing, he found something amazing. Somewhere off Algeria, while cruising from Tangier to Malta, he spotted a dark shape flapping around close to the ship’s swell. Dave snapped off a few frames, and managed to confirm the identify of the bird as a nightjar. Specifically, the lack of white spots in the primaries and tail shows this is a female European Nightjar Caprimulgus europaeus. The bird was seen between 15:00 and 16:00 and actually appeared to be hunting (for flying insects) over the sea.

So now the million dollar question. What is a nightjar, that night-singing, dirt-road-sitting, woodland-dwelling, camouflage-king, doing here? Flying in broad daylight over the open ocean? This is bird returning to its breeding grounds after its African sojourn – just in time to appreciate the nocturnal churring songs of the territorial males from the heaths, glades and woods of Europe. In Britain, nightjars have undergone decades of declines, largely due to habitat loss, but recent conservation efforts have resulted in a heartening increase. However, conservation of the species on its breeding grounds is not enough to ensure its survival, and this prompted a further investigation into nightjars’ migration routes and end destinations by the British Trust for Ornithology. The BTO tackled this difficult question by affixing lightweight geolocators to 19 nightjars in 2011. By measuring light levels, these devices allow ornithologists to estimate the bird’s position on the globe by sunset and sunset times.

ABOVE: I hope the BTO will forgive me for liberating this awesome map off their website (https://www.bto.org/science/migration/tracking-studies/nightjars). It shows the route and dates followed by European Nightjars originating in East Anglia in the UK. You can see a picture of a geolocator at the site mentioned above – the BTO’s work in general is fascinating and definitely worth supporting. Check it out!

The results were fascinating. It appears that the nightjars initially travel southwards at a leisurely pace, perhaps enjoying the lingering autumn in Europe. They then cross the Mediterranean and enter Africa, and pass in a broad front across the inhospitable Sahara Desert – perhaps the greatest obstacle to bird migration on the planet. Several tracked birds ended up in DRC where they no doubt enjoyed the tropical weather and abundance of African insects from just before Christmas to about mid-February. Around late February or March they started making their way north again, but this time followed a more westerly route. They presumably passed through West Africa and then veered north to reach the Mediterranean by late April or early May – putting them squarely in the path of Dave’s ship!

I am too pressed for time (painting waders) to do much research into nightjar migration right now, but… I did find a paper by Mike Carter and Ben Bright, published in the journal Australian Field Ornithology (2011, 28:32-37) that documents a similar situation. In this case the culprit was a White-throated Nightjar Eurostopodus mystacalis, which photographed while flying south off the coast of Queensland. Likewise, this was at 16:00 on a calm, sunny day. The bird stayed close to the water’s surface (about 0.5m, occasionally 2m up) and followed a steady course, about 4km offshore. White-throated Nigthjars spend the non-breeding season in Papua New Guinea and then migrate to Australia to breed – this one was thus migrating south, which ties in with the observation date of 25 August. Some other nightjars were also observed on the preceding days – including at 09:00 in the morning. The birds were estimated to be flying at approximately 30 kmph.

Of course this is not the first sighting of a European Nightjar migrating over the sea. There are many reports of migrating nightjars approaching boats or even landing on vessels for a brief rest. In fact, the possibility that some sightings of ‘mysterious dark petrels’ may actually pertain to nightjars. And why would a nocturnal bird migrate during the day? Perhaps it chooses to cross inhospitable stretches (e.g. ocean channels) during the day, in order to have the night free for feeding and replenishing its strength? 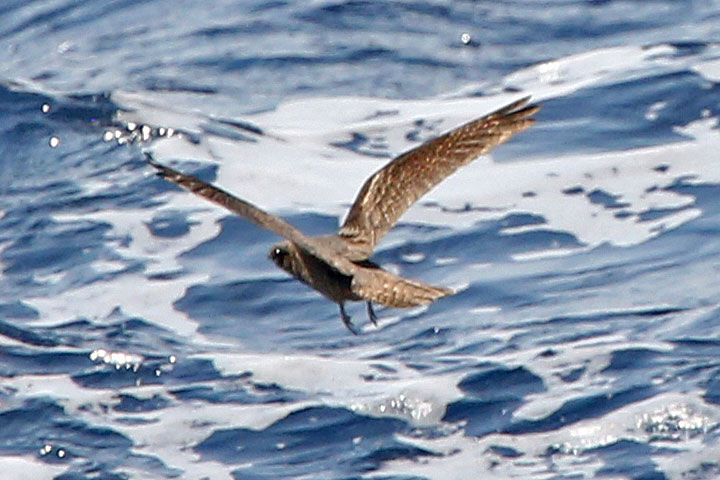 ABOVE: I note that this bird’s feet are hanging down and are not tucked against the body for less wind resistance – I wonder why? It almost has a storm-petrelish look about it here. 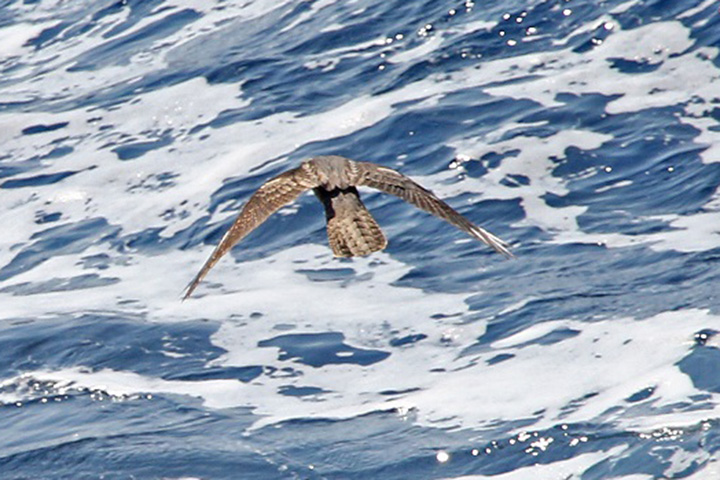 ABOVE: The whitish flash in the outer primaries (again, like many pelagic birds) is not due to white wing-spots as in male nightjars, but instead is just glare off the shiny feather surfaces. 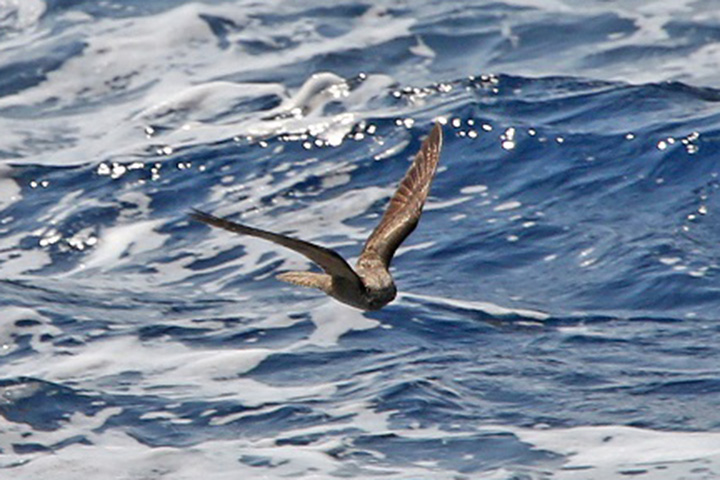 ABOVE: As was the case with the observations of migrating White-throated Nightjars off Australia, the bird remained close to the water’s surface. The rather long wings and tail of this species are visible in this image. The wings are raised high on the upstroke and powered far down on the downstroke, with occasional short glides on flat wings. Photo by Dave Deighton. 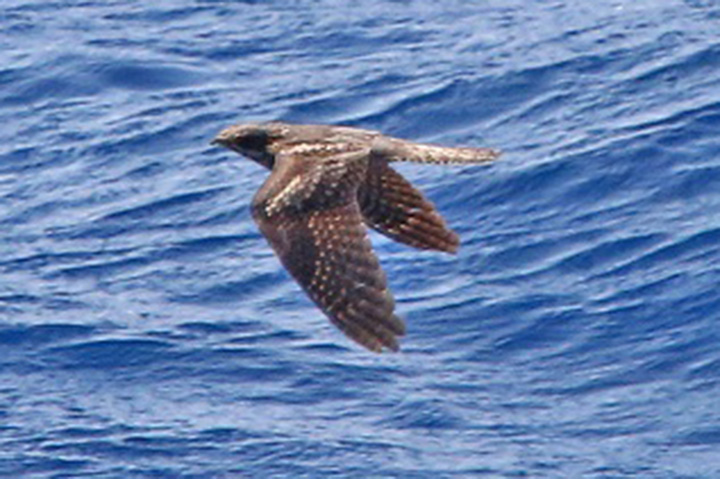 ABOVE: Euros have longer and more pointed wings than  African nightjars  – as would be expect from a long-distance migrant. The lack of wing or tail spots suggests this bird is a female. The relatively late date of the sighting may also indicate a female (in many migrants males migrate a week or two before females, to establish territories so long). 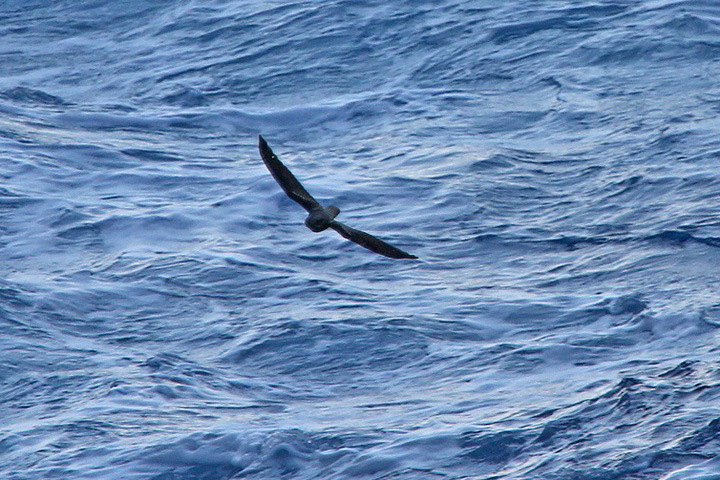 ABOVE: One can understand why some birders have suggested that migrating nightjars may be mistaken for small, all-dark petrels – especially in poor light. Photo by Dave Deighton. 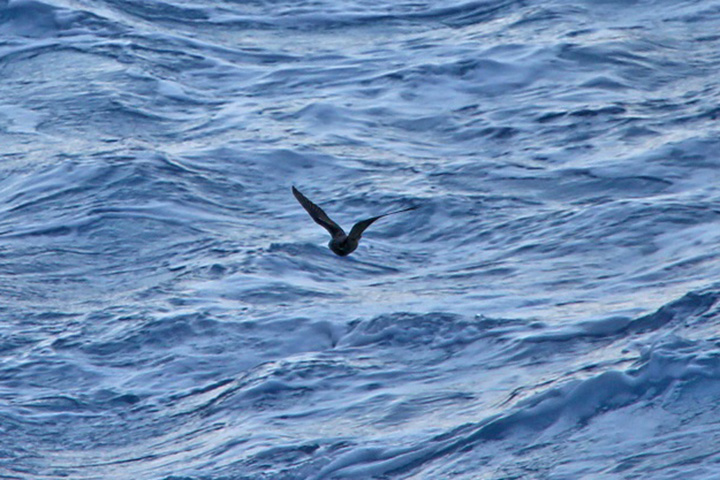 ABOVE: The nightjar doing its utmost to mimic a petrel. The pale covert tips may be taken for the paler ‘M’ shape shown by gadfly petrels. Photo by Dave Deighton.

THE NIGHTHAWK: A cool superhero name, and also a potential vagrant

I briefly and naively considered the possiblity that Dave’s bird may be a Common Nighthawk Chordeiles minor, a migrant from the Americas. However, nightjars have proportionately longer and more pointed wings, and have prominent white wing spots situated close the base of the primaries. In addition they have shallowly forked tails, and males have a white subterminal band on the tail. They tend to fly higher and more purposefully than nightjars, and look more like falcons in flight. This reminded me of an article by Peter Ryan that I came across in a 1989 issue of Birding in Southern Africa (41(3):80-81). I am being a bad boy, but I hope the publishers/editors/and of course Peter will forgive me for scanning in his article – click on the images below for a larger version. This is a report of a Common Nighthawk found dead on Tristan da Cunha Island in the Atlantic – about halfway between South America and Africa. This suggests that vagrants of this species may occasionally find themselves on our little continent, and local birders should definitely keep an eye open for these badass-sounding birds. 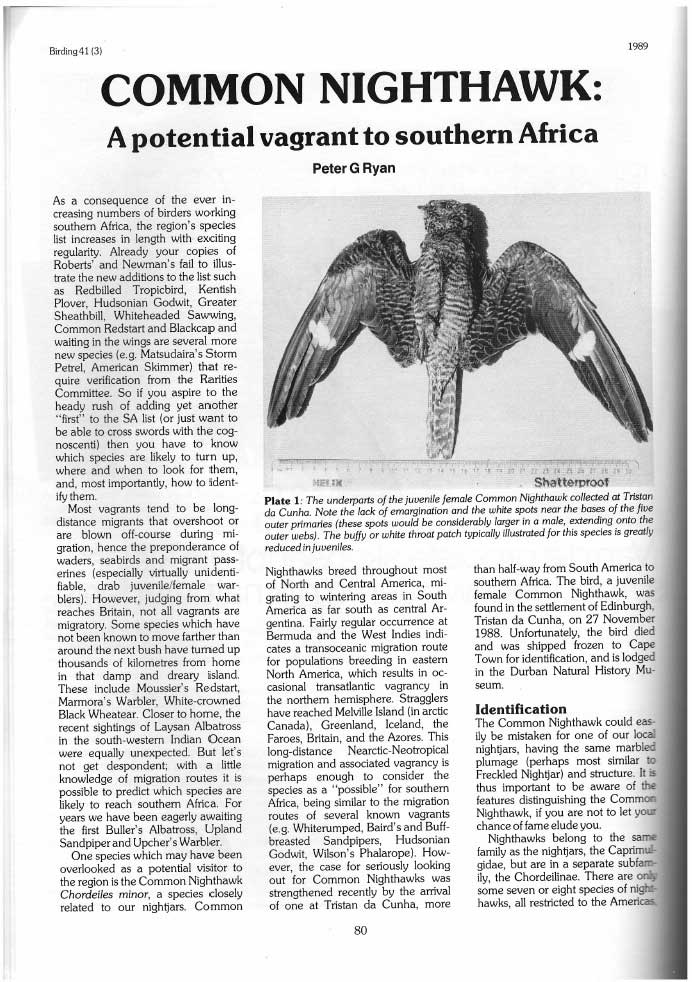 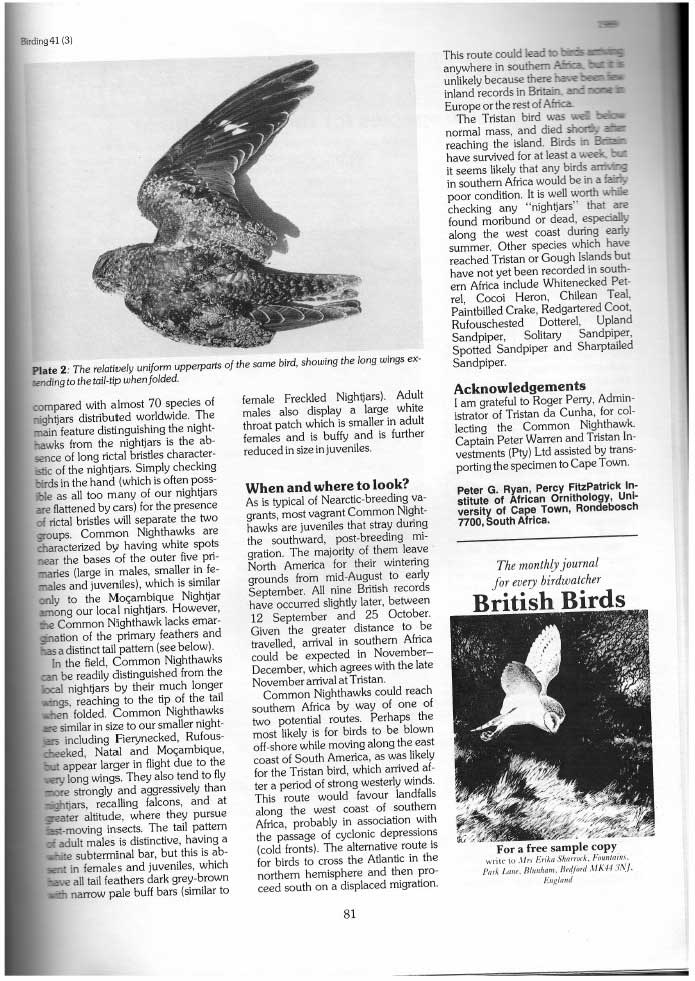