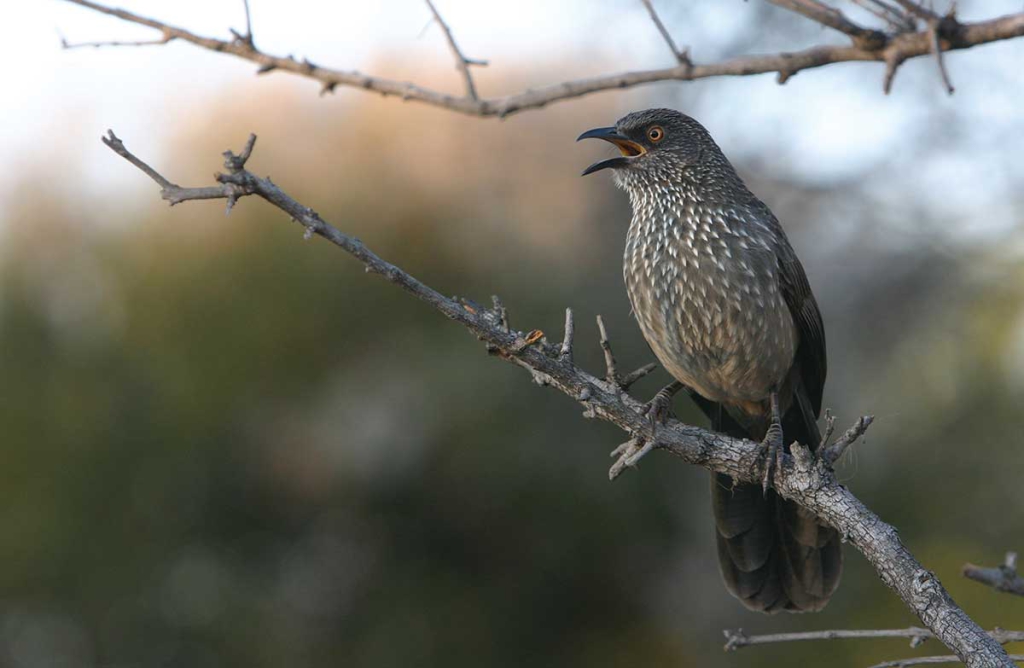 ABOVE: Arrow-marked Babblers Turdoides jardineii are just one of the many species that flood into the ‘burbs in winter. These oversized, gregarious babblers make their presence known by incessant chattering that sounds like both scolding and laughing; hence their Afrikaans name katlagter (cat-laugher). Photo by Grant Peacock.

South Africa is blessed with a long summer. Which is actually a pity from a birding perspective. Yes you heard me right. In many ways, I think our few precious winter months are actually far more interesting from a birding perspective. Sure, getting out of bed between May and August is much more difficult; but if you want to catch the dawn chorus, you can only rise at about 06:30, instead of 04:3o as in summer. But the reason I wanted to jot down this quick mini-post, is really just to share some of the interesting immigrants that I’ve been noticing at home these past few weeks.

For never-resting time leads summer on
To hideous winter and confounds him there;
Sap cheque’d with frost and lusty leaves quite gone,
Beauty o’ersnow’d and bareness every where.

With the upcoming birth of my son at any moment, plus several looming and synchronised deadlines, birding has not really been a priority. But I did hear a few good birds, and I even managed to steal a few glimpses out of the bathroom window while I was peeing. What birds would you classify as winter immigrants to your neck of the woods? Here in Pretoria, the quintessential winter immigrant is the tiny Fairy Flycatcher Stenostira scita – a hyperactive blur of grey, black and white in the thorny canopy, this taxonomically engimatic endemic is South Africa’s lightest bird. Having had the pleasure of handling some of these chaps, I can promise you they weigh absolutely nothing! Well, about 6 grams to be fair. Where do our Fairies come from? That is still unclear…some have suggested that they may hail from as far as the Tanqua Karoo region of the Western Cape, while others think they might have fled the winter snows of the Lesotho highlands. Ironically, this is the one winter immigrant that has (so far) been absent from my garden this year.

Another occasional visitor to Pretoria’s gardens, especially but not exclusively in winter, is the African Grey Hornbill Tockus nasutus, whose cheerful whistled calls brighten even the coldest winter day. What else? During the last few weeks I’ve been hearing the blood-curdling screech of a Grey-headed Bush-Shrike Malaconotus blanchoti, from the same tree at the same time each morning. I have not heard the normal ‘ghost’ call of this species, so I suspect that my bird is a female. As you may have guessed from the image above, a family of Arrow-marked Babblers Turdoides jardineii have also appeared recently, alongside a party of sound-alike but non-related Green Wood-hoopoes Phoeniculus purpureus. The former used to be a relatively common garden bird, but their numbers have dwindled greatly in the last two decades. That reminds me – I must do a post about Yellow-billed Kites at some stage. 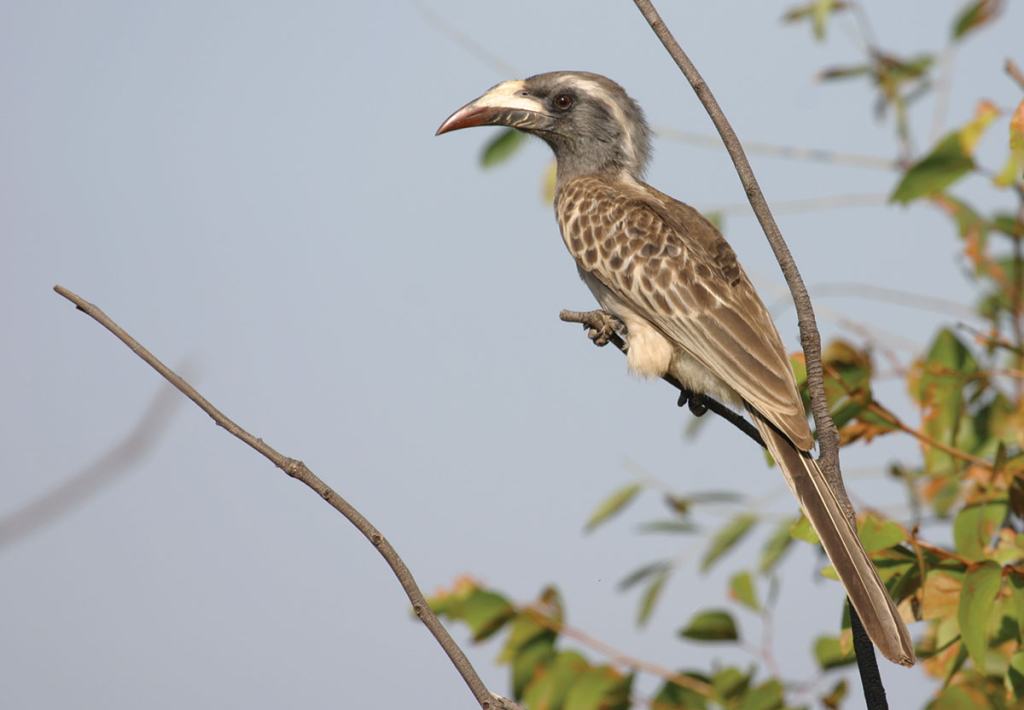 ABOVE: African Grey Hornbills Tockus nasutus are increasingly regular visitors to Gauteng’s suburbs, especially in winter. The pale casque and reddish bill tip of this bird identifies it as a female. Photo by Clive Kaplan (www.birdpics.co.za).

One of the most numerous winter immigrants to Pretoria’s suburban gardens is the Amethyst Sunbird Chalcomitra amethystina, which then competes with the much smaller resident White-bellied Sunbirds Cinnyris talatala. Black-backed Puffbacks Dryoscopus cubla are around in the garden throughout the year, but I suspect that their numbers increase in winter. Chinspot Batises Batis molitor are usually around in small numbers in winter, but are very easily overlooked as they give only short, clipped contact notes, and not their usual three-blind-mice songs. Another surprisingly inconspicuous winter visitor is the Black-headed Oriole Oriolus larvatus. Ditto for Brown-hooded Kingfisher Halcyon albiventris. Yesterday I also heard an African Green Pigeon Treron calvus calling in the big tree by my office – whether it is a winter visitor, or just a seasonal visitor in search of fruiting trees is unclear though.

Another cool thing to watch for in winter, is that the pairs of Cape White-eyes Zosterops capensis (or Green White-eyes Z. virens if you prefer) coalesce into huge roving flocks, that can number more than 100 birds. Two other winter species that are definitely worth of a mention are Fiscal Flycatcher Sigelus silens, and Pearl-breasted Swallow Hirundo dimidiata. While I don’t get these in my garden as such, both are common in Rietvlei Dam Nature Reserve in winter, only about 5 minutes down the road from me.

An encounter with a party of exquisite Swallow-tailed Bee-eaters Merops hirundineus is a special winter treat. While these small, agile insectivores have a huge African range, they are scarce, predominately winter visitors to the Pretoria region. I found a small group of about 7 birds roosting in the tall bluegum trees below the restaurant in Moreleta Kloof Nature Reserve, where we often go for afternoon walks. Since I reported these birds on 25 May they have apparently been quite cooperative, and a number of local twitchers have connected with them. While I occasionally bump into Swallowtails, a wholly unexpected winter surprise this year was a Lizard Buzzard Kaupifalco monogrammicus, sitting on a street lamp in the suburb of Elardus Park, Pretoria – to be precise, on the corner of Boeing and Boston streets. This bird was remarkably unperturbed by the pedestrians, cyclists and car passing right below it, and seemed completely focused on hunting the few Montane Speckled Skinks braving the winter chill in search of some sun. I saw the Lizard Buzzard a few times in the same vicinity on subsequent days. Another very unexpected, but welcome, visitor that we had in the garden last year was a transient Pearl-spotted Owlet Glaucidium perlatum. 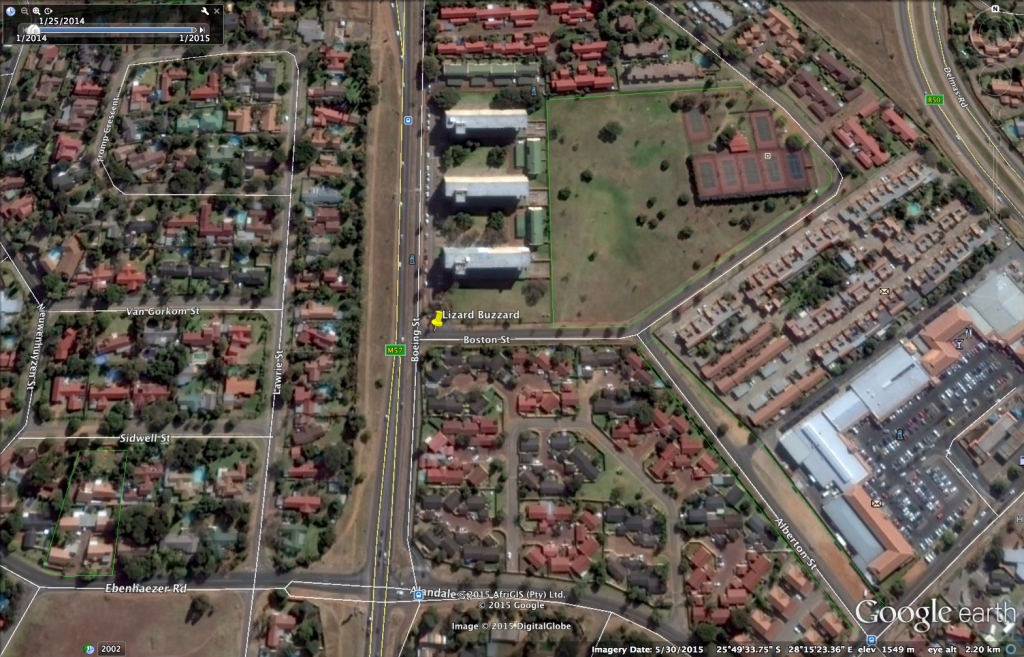 ABOVE AND RIGHT: Not your typical stakeout for Lizard Buzzard: the corner of two busy suburban streets in Elardus Park, Pretoria. I managed a few cellphone shots of this out-of-place Lizard Buzzard in the suburbs. It appears that very small numbers of this stocky little raptor enter Gauteng’s suburbs in winter. You can just make out the bird on the street lamp in the bottom right picture. 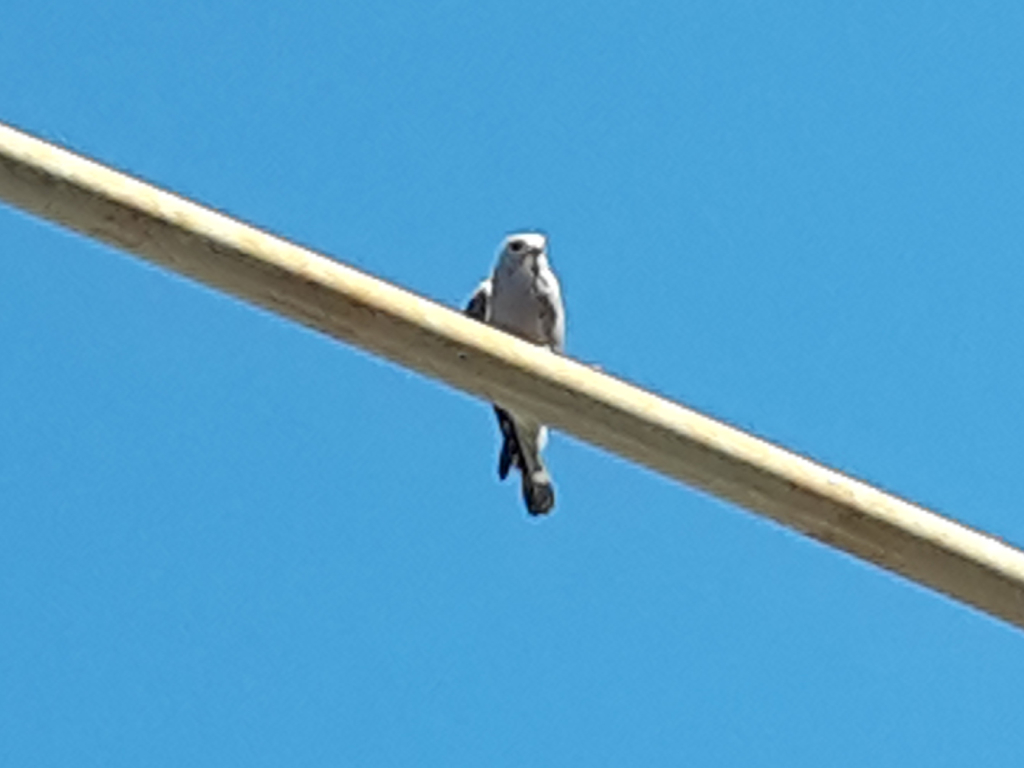 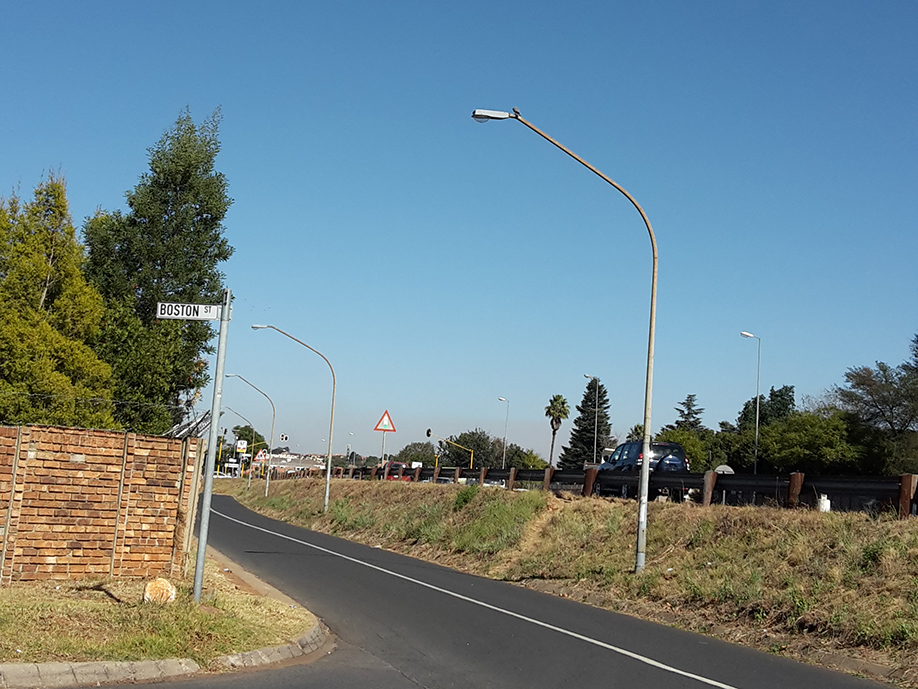 So what can we learn from all this? To me it seems that there is a clearly discernible influx of birds into suburban areas. I am not sure whether the overall number of birds in the garden is higher, nor is it clear whether the species diversity is greater. Indeed, in summer the garden is pumping with warblers, flycatchers, swallows, swifts and various other migrants. However, I think that the diversity of ‘resident’ (and I use that term loosely) South African species is greater in the garden in winter. The usual suspects, including things like Cardinal Woodpecker Dendropicos fuscescens, Southern Boubou Laniarius ferrugineus and Bar-throated Apalis Apalis thoracica are still around in winter, but are joined by a whole suite of new species. It seems that species that breed in the bushveld/savanna regions to the north of Pretoria are particularly prone to winter immigration. With Pretoria’s location at the interface of the bushveld and highveld biomes, I guess that makes sense. Have you noticed any different birds in your neck of the woods in winter? I’d love to hear your comments!