Wonders and Wanderers – Flock at Sea

ABOVE: A three minute summary of our Flock at Sea trip, with pictures of some of the species we encountered. Watch for a cameo by Niall Perrins towards the end.

Where were you during the week of 24-28 April 2017? If you’re a South African birder, chances are you were somewhere in the middle of ocean, aboard the MSC Sinfonia. BirdLife South Africa decided that the perfect location for their 88th AGM would be 200 nautical miles off Cape Town – and they invited almost 2000 birders along for the ride. The plan was simple. Cruise south to the continental shelf edge, then head east to explore the waters around some undersea mounts and upwelling zones, before looping back northwest to Cape Town. And hopefully pick up some seldom-seen oceanic birds in the process. BLSA is first and foremost a conservation organisation, and being out at sea once again highlighted the importance and success of their seabird conservation work, and particularly the near-miraculous reversal of seabird incidental bycatch rates. But BLSA is also a platform for the birding community to interact, and in this sense the “Cruise to Nowhere” was a roaring success. Great camaraderie, a fun atmosphere, excellent food and facilities, onboard lectures, knowledgeable guides, and let’s not forget about mega birds!

After a logistical delay, we ended up boarding the ship fairly late on Monday afternoon, and we had a relatively uneventful cruise out of the harbour and south along the Cape Peninsula. So I’m not counting that as the first hour – but overnight, we progressed far into the ocean, and woke up on prime birding waters.

Is there anything more exciting than the first hour of the first morning of a birding trip? You know the feeling. Setting the alarm a little bit too early, thinking that you’re going to struggle to get out of bed; but then waking up feeling refreshed and energized despite your over-excited, fitful sleep. So now you’re awake a full hour before it even begins to get light. Then comes the pre-dawn toothbrushing routine. Then the foraging mission, with the main target a strong cup of coffee. Finally you take up position outside, but it’s still too dark to really make out anything. There are tantalizing teasers though – nothing more than moving shapes – but your mind can (and will try to) morph them into almost anything you fancy.

And then it begins! One of the greatest blessings in birding, is if the first day exceeds your expectations. On the Sinfonia, the first hour of the first day did exactly that. To the extreme. In fact, several experienced seabirders on board said that the morning of Tuesday, 25 April, was the best pelagic birding they had ever experienced in a lifetime of birding at sea. I got four lifers on the trip, and all of them were within the first hour or two of that morning.  Wandering was the most common albatross, and according to global albatross fundi, Peter Harrison, at least one or two of the “great albatrosses” we saw were identifiable as the rare Tristan Albatross. It wasn’t long before a Black-bellied Storm Petrel appeared in the wake, giving extended views, and kicking up small trails of spray as it skied across the water. Then a Grey Petrel cruised down the port side of the ship, before the first call of “Sooty Albatross” went up. We couldn’t believe the quality of the birding! But there was more to come. “White-headed Petrel!” was next…one of several birds we saw during the trip. And lastly, the mega of the cruise: the exquisite Light-mantled Albatross! A huge dinosaurian bird, all angles and sleek lines, with an attractive light grey mantle contrasting with a sooty grey-brown body, finished off with a white crescent around the eye and blue stripe along the bill.

Not a bad start to the morning, I would say.

The problem with such a fantastic first day, is that you have unrealistically high expectations for the rest of the trip. Indeed, the second morning of the trip, Wednesday, the stern of the boat was so densely packed by dawn that you had to try and peek between heads, shoulders, legs, and lenses for a view of the sea. The birders were there; the birds were not. We also tried chumming: dragging frozen blocks of smelly fish oil behind the boat in the hope of the smell attracting additional birds. But no luck. So after a rather quiet day, we weren’t expecting too much at sunset. But then magic happened. Following a short-lived storm, the most magnificent double rainbow appeared, bathing the watery world in otherworldly colours and transforming any white bird into gold, as if through alchemy.

I’ve sat through my fair share of lectures. But Peter Harrison’s talk on “Albatrosses – the Ocean Nomads” was without a doubt the single best lecture I have ever had the privilege of experiencing. If you were there, I am sure you’ll agree that Peter has an unmatched, infectious passion for these birds that is heartwarming, entertaining, educational and melancholy all at the same time. At one stage I looked around me, and spotted several people wiping away an emotional tear. As someone who presents talks on a regular basis (I did two on the Flock cruise), I was definitely inspired anew for sharing my love of birds, birding and conservation. I was struck by the level of physical activity Peter displayed – jumping on and off the stage, running around, mimicking albaross displays, imitating albatross calls…surreal! Luckily I had my notebook with me; I ended up making 6 pages of notes and sketches while Peter talked. He was also most helpful in regards to some questions I had about albatross moult patterns. Standing ovation well deserved!

On the last night of the trip, our bunch of friends decided that a group photo was in order before dinner. The light and background didn’t work for us inside the ship, so we decided to try one of the side decks instead. We stepped out into the night and peeked over the rail – only to be greeted with flocks of birds! Large numbers of seabirds were attracted to the lights of the ship, and were hunting almost within touching distance. It is one thing to see a Wilson’s Storm Petrel 300 m out, weaving between the waves, but to have one fly right by your face at night is a very different experience! Albatrosses and White-chinned Petrels ghosted by, while rafts of Great-winged Petrels were drifting slowly from bow to stern, flying back along the length of the ship to repeat the process every few minutes. One of the highlights – which precipitated raucous cheering from the birders directly alongside, was a floating Great Shearwater who spotted an approaching squid. The bird promptly dove down and chased the squid around underwater, like some predatory fish. We could clearly see it swimming around 1-2 m down, until it emerged victorious with its seafood meal. I spent a good two hours just hanging out on these decks, soaking in this poetic experience. The ocean was as smooth as glass, with the dark horizon blending imperceptibly into the inky black sky. An explosion of stars washed over the heavens, seemingly reflected in the white specks of hundreds of shearwaters drifting below. I was close to tears. By the way, the group photo came out great too!

Poor MSC. They must have been very confused about the latest batch of passengers on their cruise liner. They all get up super early, when night skeleton staff are still on shift. They all go to bed just after dinner (presumably so they can get up early again the next morning). They eat very quickly and very little, and then rush outside again. They just stand on the stern of the boat from dawn to dusk, looking mostly at nothing at all. No takers for bingo, one-armed bandits, raffles, shows or any other onboard entertainment. The pools, casinos, bars, shops and theatres all pretty much empty. What’s wrong with these passengers!? They are birders, of course. And we as birders understand each other. And as birders, it is crucially important to spend time with some like-minded folk from time to time, just so we can remind ourselves that we are not the only weirdos out there. As we so often are amongst “normal” people.

Better than any lifer, was seeing so many old friends again, and meeting so many new ones! Birding friendships really are strange if you think about it. We all have this same shared passion that means we always have something to talk about, and consequently small talk is seldom heard between birders. We just launch straight into a discussion of the taxonomy of prions without as much as a howdy-do. We typically see each other only on some big birding trip, or when a vagrant draws us to some specific place at the same time. We are of different ages, sexes, languages, religions, income classes and backgrounds…yet we all feel equal as birders. In general, birders are intelligent, educated, sensitive, passionate people – overall a great bunch to be around with.

Thanks to everyone who came and introduced themselves to me – typically with very kind words about my books and my work. It was great to meet you all. And thanks to all the friends I’ve known for years, but don’t see nearly as often as I would like to. It was wonderful chatting for a few minutes during quiet moments on deck. And thanks to all the guys that I see way too much of. I haven’t laughed that much in a long time! 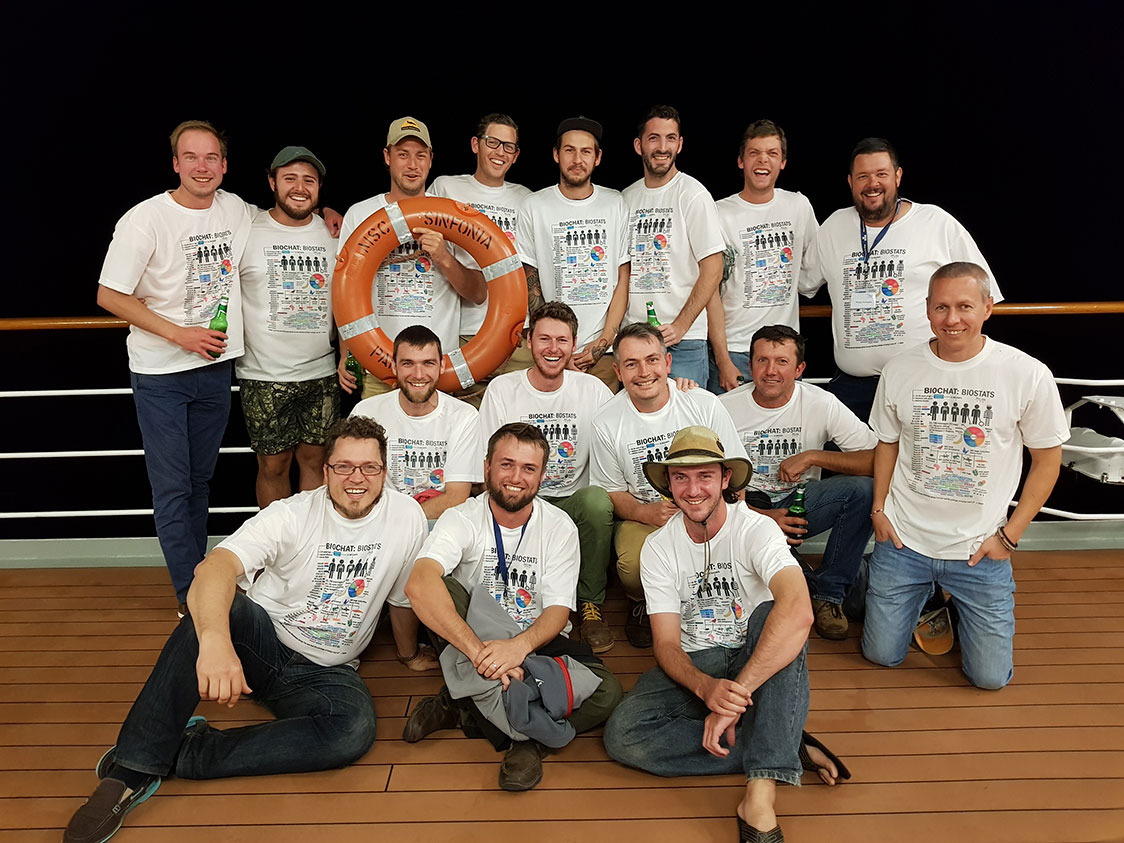