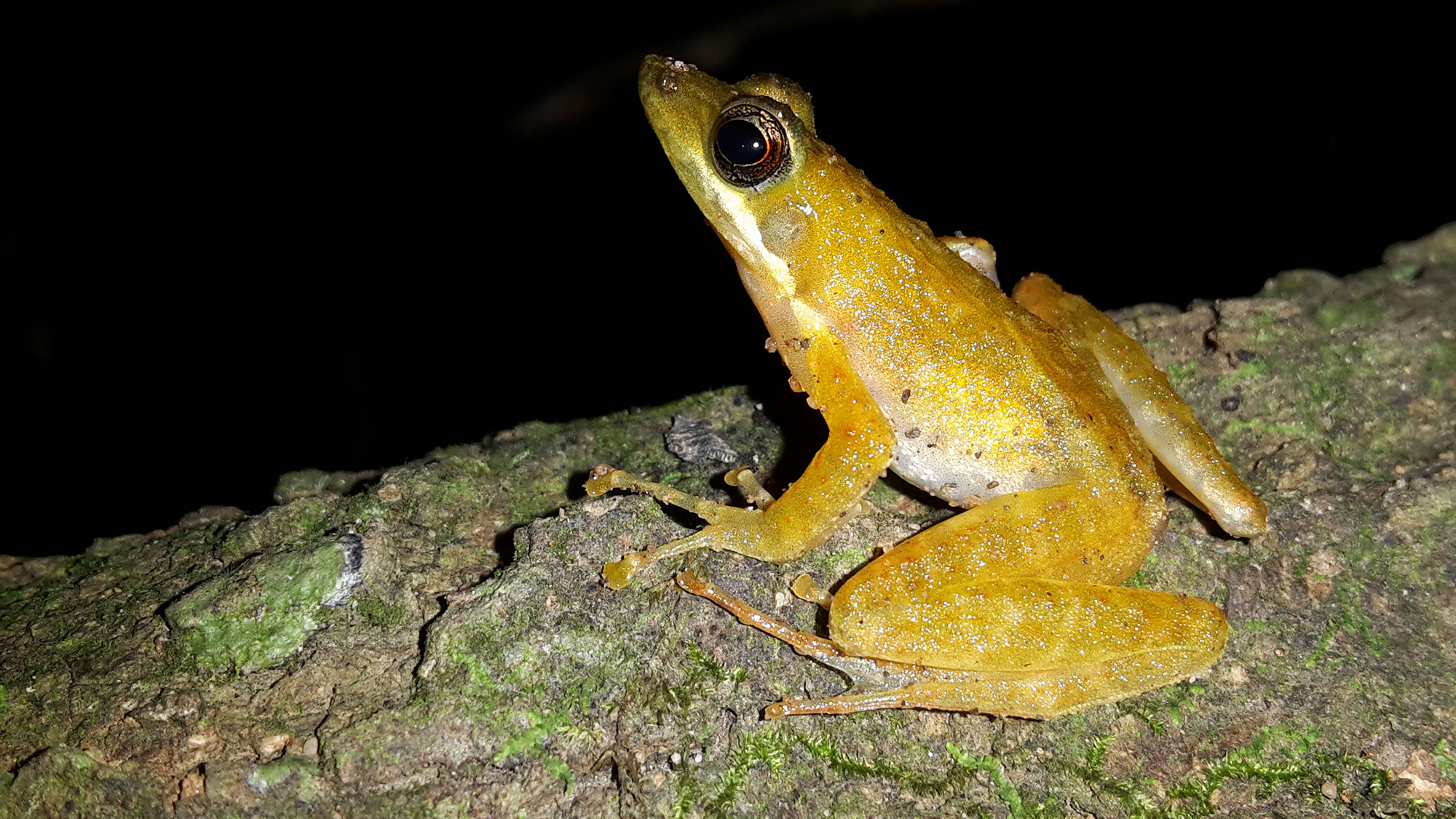 ABOVE: Yup. This is what I meant by ‘kloofing’ – going out to look for a very special little frog endemic to South Africa’s East Coast, called the Kloof Frog. They are good jumpers and swimmers and will happily demonstrate these talents when they feel threatened, but they can also be quite confiding at times – this one I photographed with my cellphone. Not too bad, if I do say so myself.

The story of this special little frog starts just a tick over a century ago with an English chap named Paul Ayshford Methuen (1886–1974), the son of a baron, who studied zoology at Oxford, before taking a post at the Transvaal Museum in Pretoria (now Ditsong National Museum of Natural History; incidentally, I also took a post there after my studies). Methuen teamed up with another prominent figure in South Africa’s herpetological history, namely John Hewitt (1880-1961). Hewitt also worked at the Transvaal Museum for a few years in the early 1900’s before moving to the Albany Museum in Grahamstown. These two gentlemen first described to science a little frog which was collected in KwaZulu-Natal. They realised that the frog was sufficiently unique to warrant its own genus. Admittedly they didn’t put too much creativity into it, when they came up with Natalobatrachus, from ‘Natal’ (i.e. the old name for South Africa’s KwaZulu-Natal province) and the Greek batrachos (a frog). Thus literally, ‘Natal Frog’. Thus they named a new genus and simultaneously a new species in 1913. 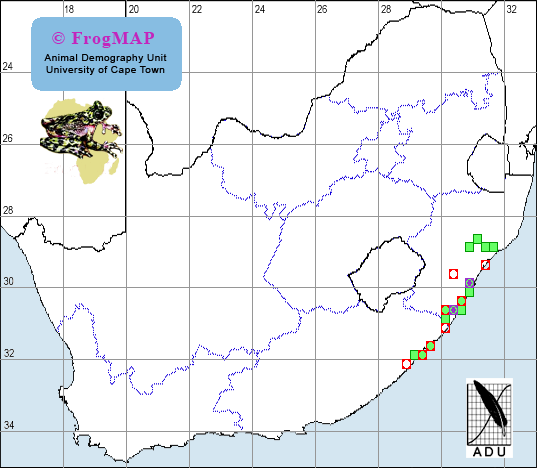 ABOVE: This nice map is from the Virtual Museum / ADU’s FrogMAP project and plots both museum specimen data and actively collected field data. Recent field records are also supported by photographs which you can see at the Vitual Museum. Just follow the links from http://frogmap.adu.org.za.

Perhaps the most important player in the Kloof Frog saga, was Father Paschal Boneberg, a missionary of the Roman Catholic Church who, in 1912, found himself at Mariannhill Church, just south of Pinetown in KZN. Marianhill was at the time one of the largest mission stations in the country, and I imagine that Boneberg esecaped the day-to-day stresses of the clergy by exploring the forests and streams around the church, collecting and cataloguing specimens of reptiles, amphibians and insects. Indeed, in 1912 he sent a batch of specimens to the Albany Museum, which included the first examples of the little hero of this story. Also in this shipment, were some bizarre and hitherto unknown tadpoles with big sucker-mouths that clung to the undersides of rocks like leeches.

Hewitt and Methuen decided to name the new froggy after its discover, and so Natalobatrachus bonebergi came into being. Their findings were published in an article entitled ‘Descriptions of some new Batrachia and Lacertilia from South Africa’ in the journal Transactions of the Royal Society of South Africa, Volume 3, pages 107–111. Incidentally, the weird tadpoles belonged to one of the ghost frogs – specifically in this case the Natal Cascade Frog, Hadromophryne natalensis, which was described by Hewitt in the same year as the Kloof Frog. Professional herpetologists were a small community back in those days, and it is not too surprising that there is another species of ghost frog named after Hewitt, namely Heleophryne hewitti, which is a highly localised species essentially endemic to four rivers in the Elandsberg mountain range near Port Elizabeth. 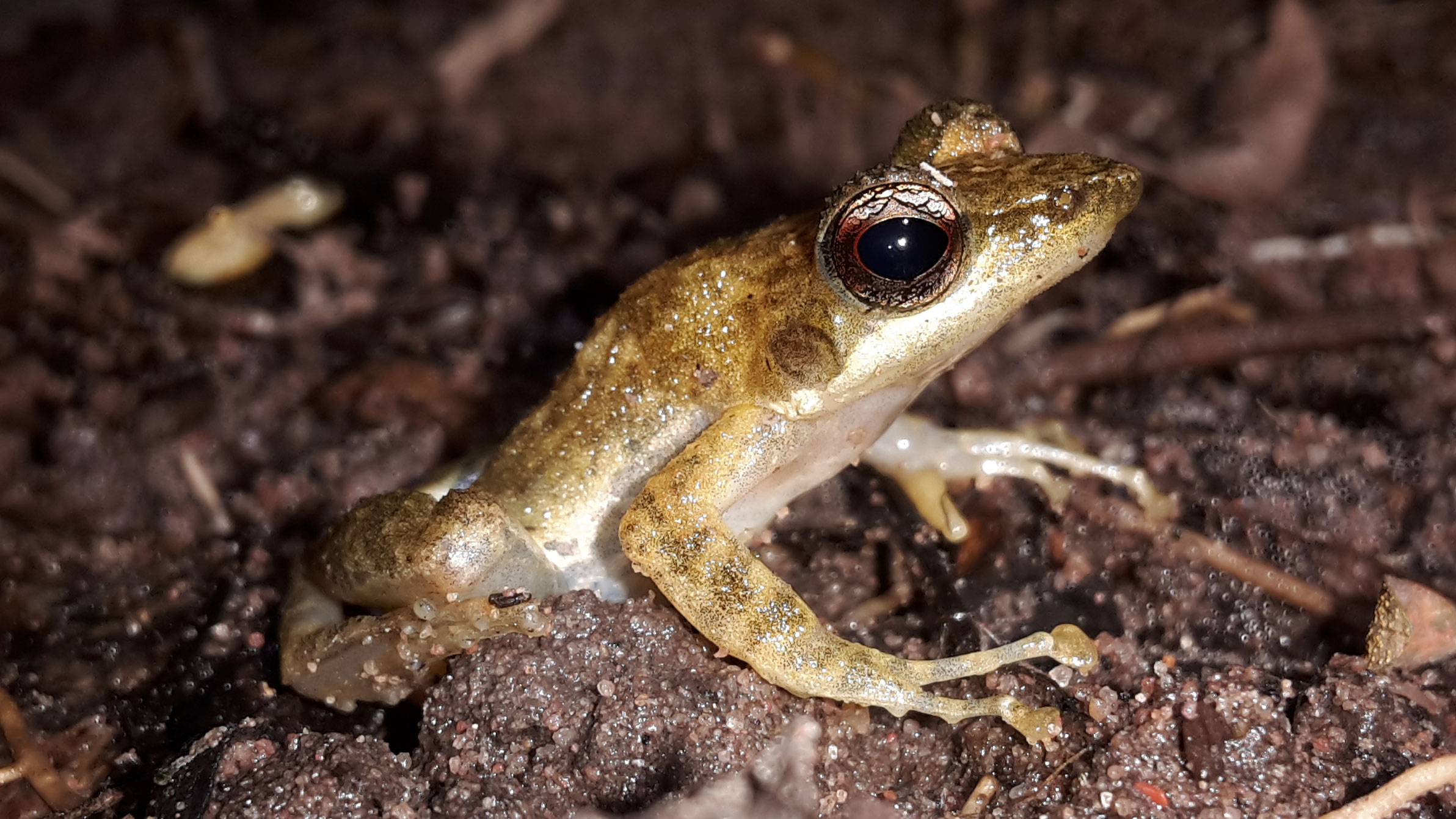 ABOVE: This individual is showing the ‘overbite’ that is one of the characteristic features of this species/genus, along with finger-pads and a horizontal pupil. This one was initially sitting on a branch but jumped down to the ground. Kloof Frogs come in all sorts of colours: green, yellow, brown, mottled, with a broad vertebral stripe and dark mask…

You may ask ‘what makes this frog so unique? It looks just like all the others’, and that’s a great question. Some other doubters have argued that the genus Natalobatrachus should be merged with Phrynobatrachus, the puddle frogs. However, some of the features that set Kloof Frogs apart from others is that they have horizontal pupils, a marked ‘overbite’ in that their snouts project over their lower jaws (see picture above) and broad flattened disks on their fingers. They also lack ‘vomerine teeth’ which I had to google. These are small bumpy projections on the roof of the mouth (in addition to the tiny maxillary teeth on the edge of the upper jaw). I also find it difficult to believe that these specialised, partly arboreal frogs with unique breeding habits and ecological preferences could be lumped with the rather lethargic, terrestrial puddle frogs. New studies based on genetics suggest that Kloof Frogs may be allied to Arthroleptella, the Moss Frogs endemic to the Western Cape (or perhaps KZN’s Chirping Frogs in Anhydrophryne??). At the family level, Kloof Frogs are placed in the family Petropeditidae, along with the groups mentioned above plus the cacos (Cacosternum), Montane Marsh Frog (Poyntonia) and Micro Frog (Microbatrachella).

In addition to Kloof Frog (a ‘kloof’ being the Afrikaans word for a deep valley or ravine), the species has several alternative names: Natal Frog, Natal Diving Frog, Boneberg’s Frog and even Gloomy Kloof Frog. Nice.

The purpose of those expanded, T-shaped toe-tips is to give the frogs better grip on slippery surfaces, such as slick rockfaces, leaf blades or twigs. Not surprisingly, a large part of their breeding strategy revolves around being able to reach places inaccessible to the main predators of their eggs. These are laid in batches of about 75-95, in sticky jelly balls that attach to twigs, trunks, leaves or rocks overhanging open water. Clumps may be placed quite low over the water surface, or as high as 2 m up. Often it is easier to look for the fairly conspicuous eggs clumps first, and then to search for the adult frogs hiding nearby. Old egg clumps may leave stains on the surfaces to which they were attached. Egg clumps measure about 75-108 mm, and the individual eggs are 1.5-2.0 mm in size and protected in a 4 mm diameter jelly capsule. The tadpoles take only about 6 days to develop to a stage where they can wriggle out of their jelly sanctuaries and drop into the water. Adults often perch in the vicinity of their egg clumps, and females have been seen to urinate over the eggs to keep them moist. They have a protracted breeding season, and may lay eggs from October to May (probably an attribute of the pleasant, warm, humid East Coast weather).

Kloof Frogs are endemic to South Africa, where they occur in the Eastern Cape from about Dwesa-Cwebe northwards along the coast, below 900 m in altitude, up to about the forests inland of Richards Bay. As their name suggests, they frequent deep, forested gorges with rocky streams; however, they may be found in swamp forests or even around small concrete reservoirs along forest streams. The species was not previously considered threatened, but in view of its restricted range and very specific habitat, a prudent approach is required. It is currently listed as Endangered, and is thought to have lost more than half of its habitat in the last century. Fortunately it does occur in several nature reserves, but much of its habitat outside protected areas has been replaced by sugar cane agriculture. An important conservation initiative is simply to raise awareness of this fascinating frog – and to monitor known populations and discover new ones. Make sure to submit your data to the Virtual Museum and Frog Map!
. 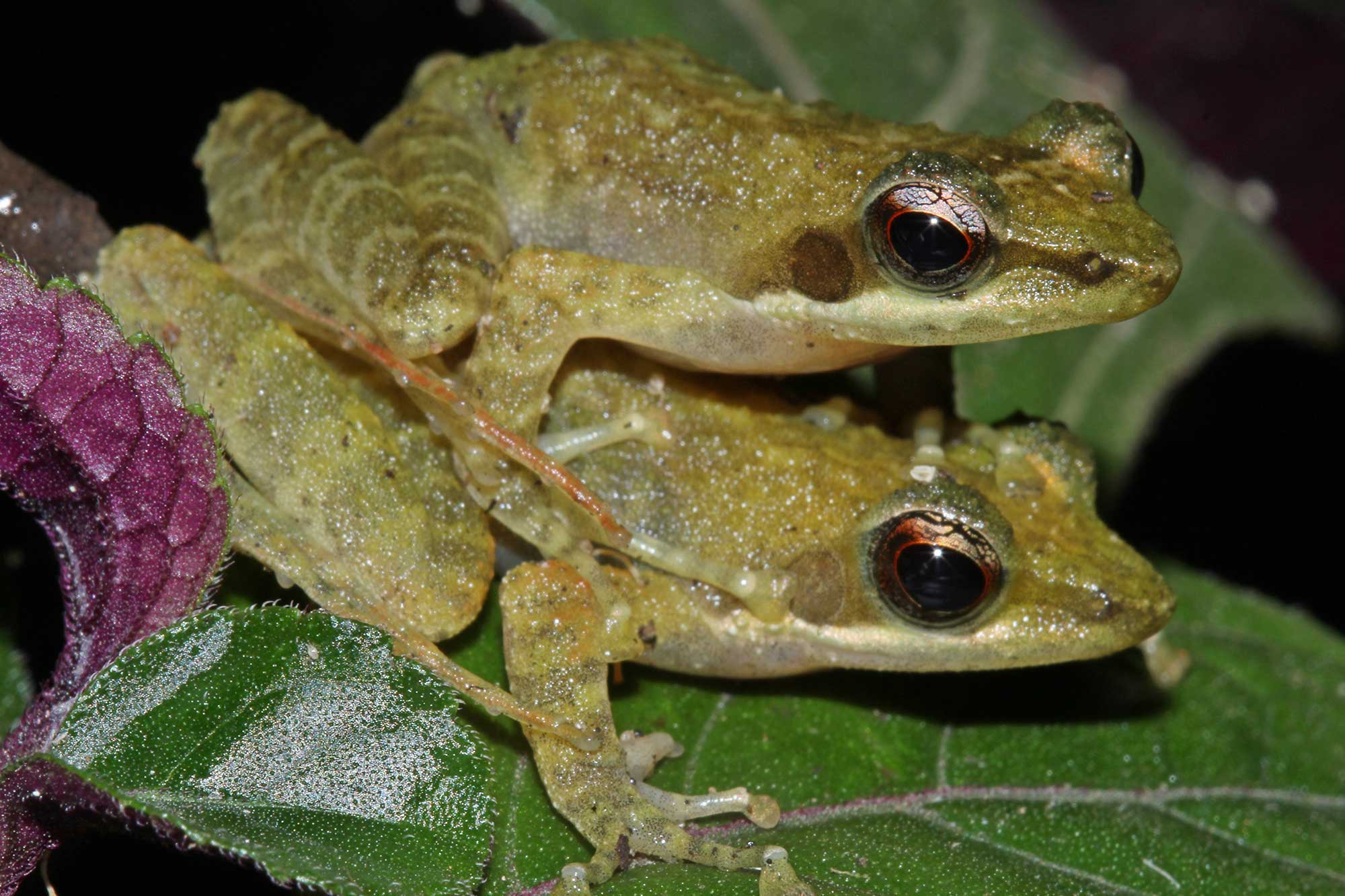 ABOVE: One of Nick’s incredible photos of Kloof Frogs – in this case a pair caught in the intimate act of amplexus (frog sex, in other words). Photo by Nick Evans. 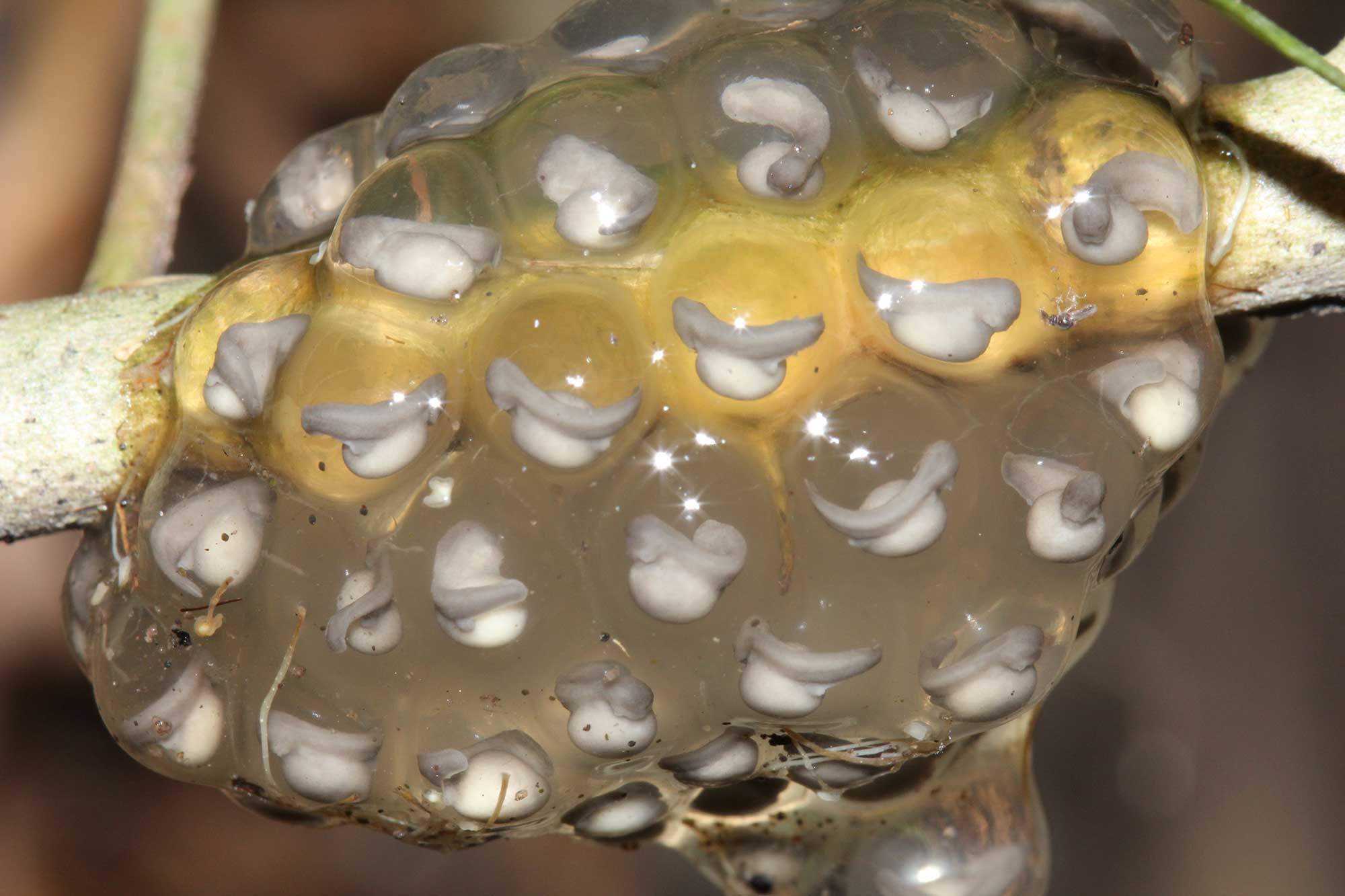 ABOVE: An amazing image of the tiny Kloof Frog tadpoles developing within their individual egg capsules in the jelly mass. Well done Nick Evans! 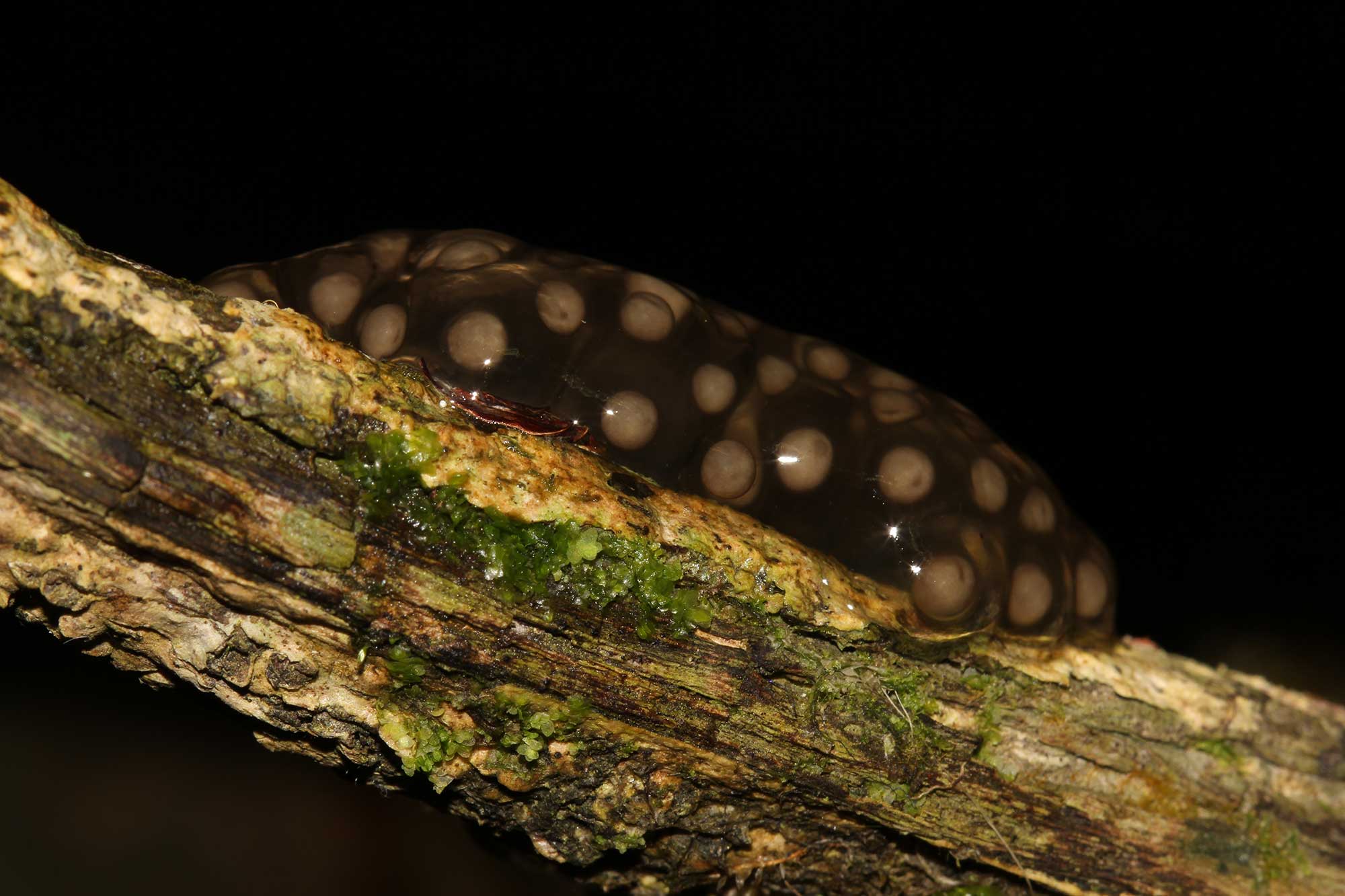 ABOVE: This egg clump has been stuck to a slanting branch overhanging a small pool. Photo by Nick Evans. 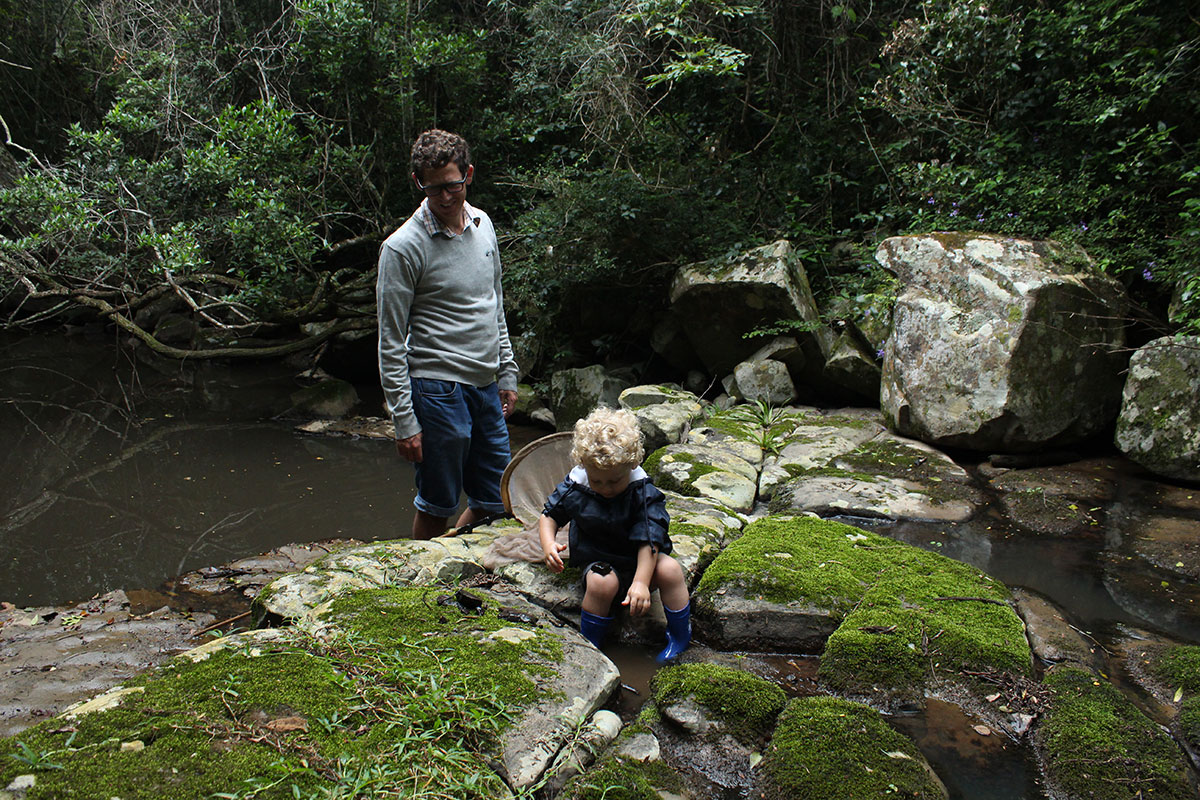 ABOVE: Christian and I exploring a forested stream in the Eastern Cape’s Dwesa-Cwebe Nature Reserve in search of Kloof Frogs. Habitat looks perfect, but no luck I’m afraid. 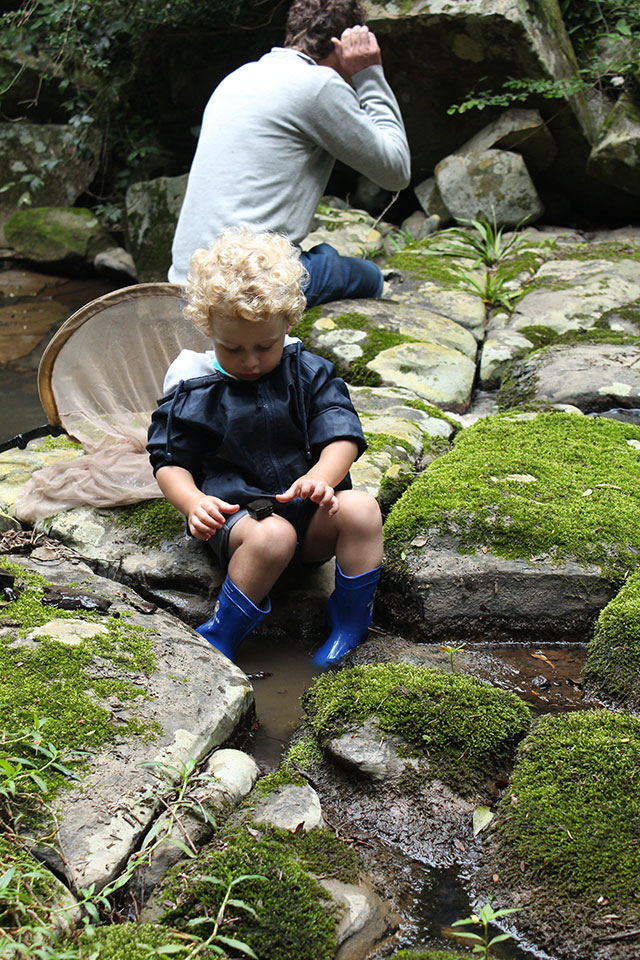 ABOVE: You can see me cupping my hands to my ears in the background and listening intently. Kloof Frog calls are very soft, and are hardly audible if you are more than 2-3 m away (or maybe I’m just getting old and deaf). 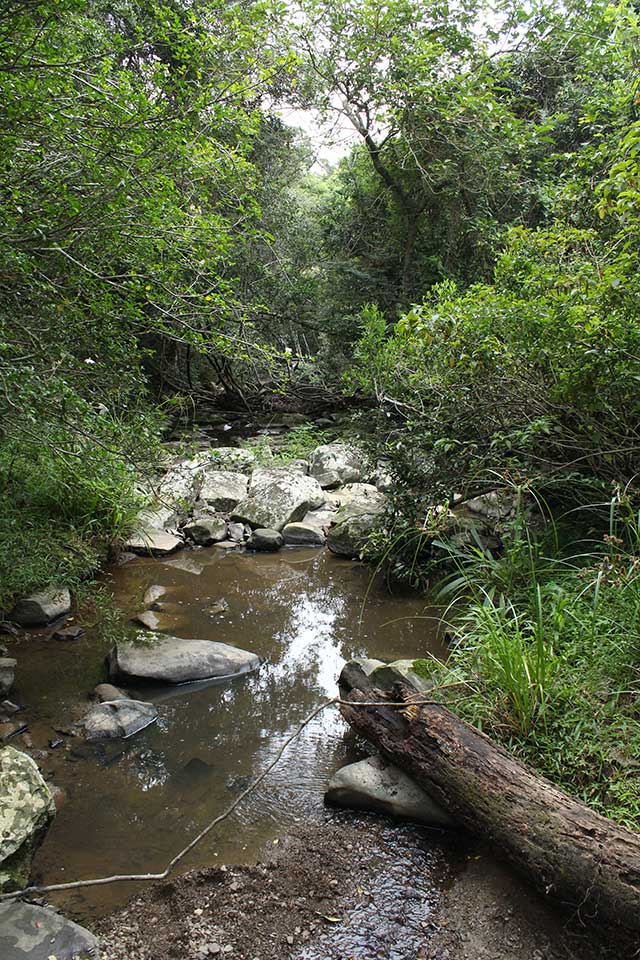 ABOVE: Typical Kloof Frog habitat. The species is found mostly on heavily wooded streams with rocky beds, where stagnant pools alternate with fast-flowing sections. The presence of branches or rocks overhanging the water is important.

I’ve tried finding Kloof Frogs on a number of occasions, but while I had a lot of fun exploring Natal and the Eastern Cape’s forested ravines, I had no luck finding the frogs themselves. That is until I teamed up with Nick Evans on a recent trip to the Durban area. Nick is probably one of the world’s foremost experts on Kloof Frogs (at 23 years old) and knows these little amphibians, their biology and their requirements intimately. Accompanied by Joelle Hoareau, we set off to an amazing private nature reserve in the vicinity of the town of Kloof (yes, really). There we met up with Jan Combrinck, switched on our headlamps and set off into the forest. Within an hour’s time, we had found 23 Kloof Frogs! I was particularly intrigued by their calls, which is a very soft click sound that is repeated at irregular intervals. Even with the frogs all around us, the call was not obvious and can easily be missed if you don’t know what to listen for. We also found several egg clumps that indicated active breeding (in the middle of April). Thanks so much to Nick, Joelle and Jan for an evening I’ll remember until I’m old and unable to go kloofing any more!
. 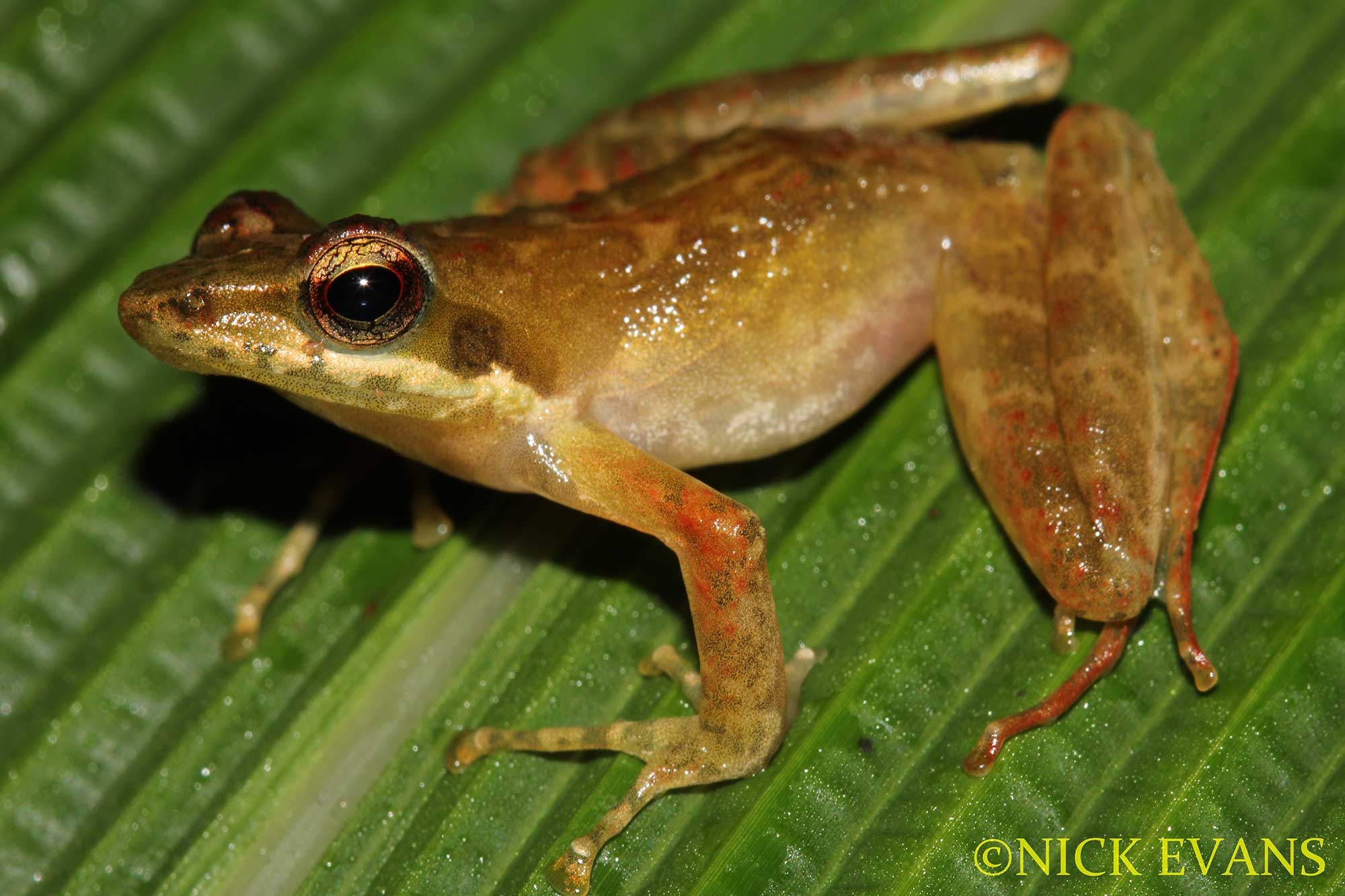 ABOVE: A parting shot of a gorgeous reddish Kloof Frog perched on a leaf. How inspiring that these little, quiet, unobtrusive frogs have been going about their lives and breeding cycles for millions of years, tucked away in their secluded haunts, remaining almost unnoticed by the world. I consider myself very privileged to have shared a few minutes with these awesome creatures. Photo by Nick Evans.